Raise your hand if you forgot Boise State has a game at Colorado State this Friday. Hopefully you didn’t raise your hand. The Broncos didn’t. 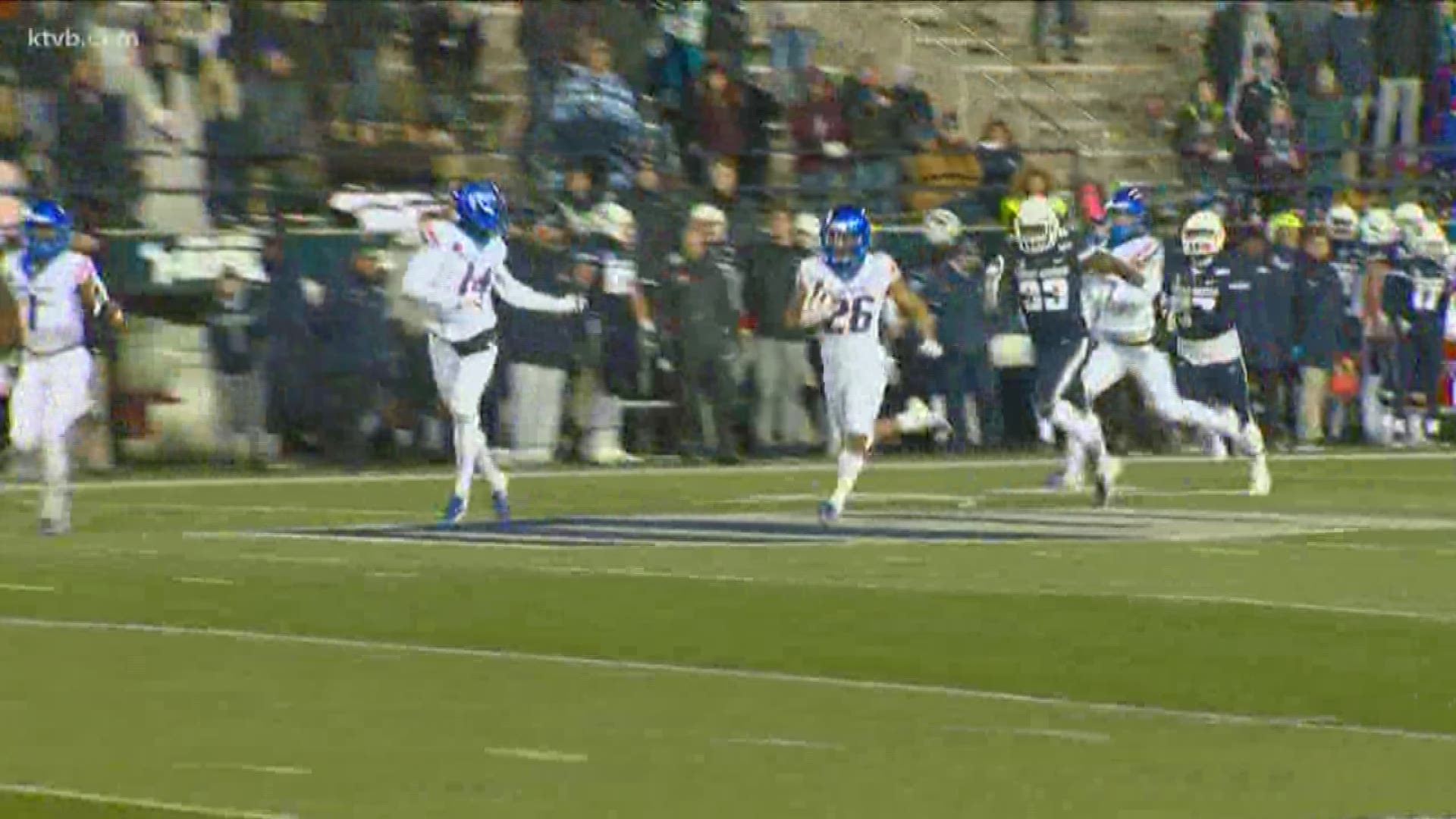 There’s a tendency to think that Boise State is now all about the Mountain West championship game December 7 against Hawaii on the blue turf—and may be overlooking its Black Friday date at downtrodden Colorado State.  Broncos coach Bryan Harsin would tell you there’s nothing further from the truth.  “This team can do something that no team in Boise State history has ever done: they can go undefeated in conference play in the Mountain West for the first time,” Harsin reminded the media at his Monday press conference.  “I guarantee that senior class, when they hear they can do something that’s never been done—they’re fired up.”  The Broncos are 7-0 with one to go.  Also, said Harsin, “We’re back on the road.  We don’t underestimate that.”

Harsin also says the squad is acutely aware of the 2017 game in Fort Collins, when Boise State had to dig out of a 25-point hole to beat the Rams in overtime.  The Broncos had a pretty good team two years ago.  Heck, they went 11-3 and roughed up Oregon in the Las Vegas Bowl.  But on Veterans Day that season, they endured a punch-in-the-mouth drive and fell behind Colorado State 7-0.  Then came a second one, and a third one, and a fourth one, and a fifth one.  The Rams were having their way, racking up 335 first-half yards.  Boise State clawed its way back into the game, but found itself trailing 52-38 with three minutes left.  Then, two Brett Rypien touchdown passes sandwiched around a stunning onside kick recovery by Cedrick Wilson allowed for a 59-52 win in OT.

O-LINE FINALLY LIGHTING IT UP

Harsin could not ladel enough props on the Boise State offensive line Monday after its performance in the rout of Utah State.  “I did think they played the best they have the entire season,” said Harsin.  “The tight ends were part of that in the run game.”  Jake Stetz started in place of the injured Eric Quevedo at right guard and was solid.  On George Holani’s second touchdown of the night, Stetz pancaked one Aggies defender and was looking for someone else to block as Holani crossed the goal line next to him.  And there was Ezra Cleveland’s fly sweep that almost resulted in a touchdown.  The O-line—and the Broncos in general—seemed intent on enjoying the pressure and the moment.

THE PLAYS OF THE GAME

Harsin identified what he feels was the turning point of the game early in the first quarter.  It was Jalen Walker’s pick-six.  Utah State and Jordan Love decided to go after Walker, and what they got was three pass deflections off the bat, and a play that Harsin pointed out is hard for a quarterback to overcome.  “That play changed a lot of things,” he said.  The popular vote, though, probably goes to Kekaula Kaniho, who went viral with his chip block that took out three Aggies on Avery Williams’ 74-yard punt return for a touchdown.  It was like a bowling ball clearing out pins for a spare.

UNLV’s Tony Sanchez and New Mexico’s Bob Davie are the first Mountain West coaching casualties of the 2019 season.  Sanchez was fired by the Rebels on Monday—he will be able to coach the team Saturday in the Battle for the Fremont Cannon this Saturday at Nevada.  Sanchez is completing his fifth year at UNLV—he’s currently 19-40 and has never had a winning season nor made it to a bowl game.  Davie reportedly has reached an agreement with the Lobos to step down after Saturday’s finale against Utah State.  Davie has gone 35-63 in eight seasons.  New Mexico peaked at 9-4 in 2016 but is 8-27 since.  Attendance in Albuquerque is down to 16,574 per game, and media reports said there may have actually been 5,000 at best in the stands for last week’s loss to Air Force.

GUILT BY ASSOCIATION IN DALLAS?

What would Jerry Jones do with Kellen Moore if he fires head coach Jason Garrett?  It depends if Jones meant to lump Moore into his scathing assessment of Dallas Cowboys football after Sunday’s 13-9 loss to New England.  "This is very frustrating,” Jones said.  "It's frustrating just to be reminded that some of the fundamentals of football and coaching were what beat us out there today.  With the makeup of this team, I shouldn't be this frustrated."  The Cowboys had 321 yards of offense against the Patriots.  Meanwhile, nothing new on the uncertainty of Leighton Vander Esch’s immediate future.  It’s been five weeks now since the former Boise State great suffered a neck stinger against Philadelphia.  The theory is that he aggravated a neck problem that dates back to his sophomore year with the Broncos.

The Ryan Finley experiment is over for now in Cincinnati, as the woeful 0-11 Bengals will go back to Andy Dalton at quarterback this week versus the New York Jets.  Finley, the one-time Boise State QB, had started the last three games for the Bengals, completing only 47 percent of his throws for 474 yards and five total turnovers.  Finley’s former Boise State teammate, Brett Rypien, may be headed back to Denver’s practice squad (if that’s where the Broncos want to put him).  Second-round pick Drew Lock is ready to be activated, and Denver may go as far as starting him this week against the L.A. Chargers.  Rypien, who has been the Broncos’ No. 2 quarterback the past three weeks, was kept on the bench Sunday even as Brandon Allen went just 10-of-25 for 82 yards at Buffalo.

All the way through the first five years of College of Idaho’s football revival, there was a lot of “first time since.”  In 2019, there’s been a lot of “first time ever,” and it continues.  First time to 11 wins, first time in the NAIA Playoffs, first home game in said playoffs and first win.  First Frontier Conference championship, and the first C of I team to build a 17-game winning streak.  In their first venture into the playoffs’ second round, the Coyotes travel to meet similarly undefeated Grand View University Saturday in Des Moines, IA.  Up north, Idaho quarterback Mason Petrino has been named the STATS FCS National Offensive Player of the Week after amassing 556 yards of total offense in his last go-round as a Vandal, the 60-53 overtime win at Northern Arizona.  It was the highest total offense output by an FCS player this season.

The Boise State women’s and men’s cross country teams both turned in top 25 seasons in 2019.  The Broncos women were 17th and the men 21st at the NCAA Championships Saturday in Terre Haute, IN.  Congratulations to the College of Idaho men’s and women’s cross country teams.  With a second-place finish by the women and a fifth-place finish by the men, the Coyotes claimed the NAIA Cross Country combined national title last Friday at Fort Vancouver, WA.  And the Northwest Nazarene women finished 16th Saturday at the NCAA Division II Championships in Sacramento.  One more thing: the Boise State women’s basketball team is back home tonight against Utah Valley in ExtraMile Arena.  The 3-3 Broncos should get back on track after two consecutive losses—the Wolverines are 0-4.

Pittsburgh and Syracuse produce the highest-scoring game in major college football history as the Panthers win 76-61 at Heinz Field.  The total of 147 points eclipsed the 74-62 win by Navy over North Texas in 2007.  Pitt and the Orange combined for 20 touchdowns in the donnybrook.  For the Panthers, the 76 points were more than they had scored in any of their three men’s basketball games against Syracuse the previous season.  The highest-scoring overtime game in FBS history remains Boise State’s 69-67 quadruple-OT triumph over Nevada in 2007.