For two decades, the Boise State head coaching job has represented a brotherhood that has produced unprecedented success. It looks like it’ll stay the course. 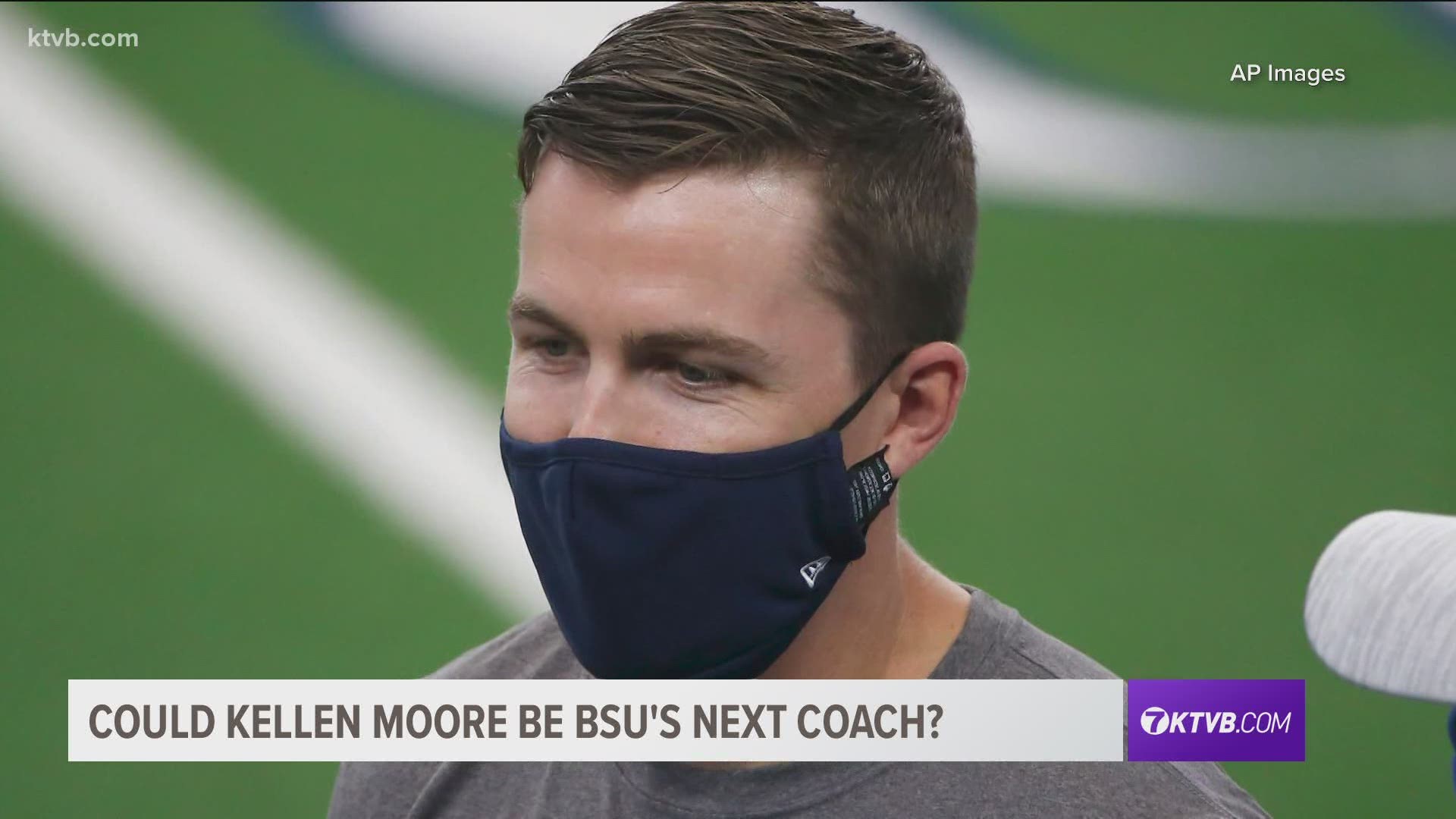 This little nugget was uncovered over the weekend by a KTVB colleague in an old Scott Slant column from January 24, 2018, almost three years ago. That’s when Kellen Moore transitioned from player to coach with the Dallas Cowboys. It went like this: “In the early days of the Boise State football team’s Summer Softball Classic, players filled out questionnaires for the public address announcer (me at the time). One question had to do with where they saw themselves in the future. One year, Kellen Moore wrote, ‘Head football coach, Boise State University.’ Bronco Nation would still love to see that someday, but if it happens, the journey will be a lot different than anyone thought.

“Moore won’t go the college football graduate assistant route, nor position coach. He’s skipped that. From Dallas, he could go directly into a (college) offensive coordinator’s spot somewhere. That is, if college ball is even attractive to him down the line. He may be in the NFL for good.”

Again, that’s from January 2018. And boom, he was an NFL O-coordinator a year later. Kellen had to have fun yesterday, as his offense rolled up 513 yards in a 37-17 win over Philadelphia. He engineered it with backup quarterback Andy Dalton throwing for 377 yards and Ezekiel Elliott rushing for 105. But after the game, Dallas coach Mike McCarthy said, "We definitely respect and understand the uniqueness of this opportunity to Boise, him and his family." Then McCarthy added, “I probably said too much.” (Has Jerry Jones spoken yet?)

There’s a couple of myths out there about Moore. One is that he is not ready for this. Well, if he has expressed this much interest in the Boise State job, then he’s been preparing for this moment for a long, long time. No doubt he has a binder full of notes—and names of those he would surround himself with. Kellen will have a plan. The second is that he’s not going to be a natural recruiter. I disagree. He’ll be cut from the Chris Petersen mold, a friendly, firm presence in living rooms. Moore is the winningest quarterback in college football history and the offensive coordinator of the Dallas Cowboys, working with Dak Prescott and Ezekiel Elliott and Amauri Cooper. That’s for the recruits. His personality is for the parents. He connects with people.

It’s leaning in Moore’s direction right now. There’s the old adage, “It’s a shame anyone has to lose this game.” That sums up this Boise State coaching sweepstakes. What was the first thing everybody thought when Andy Avalos left the Broncos 22 months ago to become defensive coordinator at Oregon? “He’d be perfect as a head coach if and when Bryan Harsin leaves.” Avalos has perfected his craft as a D-coordinator, leading the Ducks to a No. 9 ranking in total defense in his only full season at the helm so far. He’s a proven recruiter, and he would energize the current Broncos, many of whom he had a hand in bringing to the blue turf.

AND IN THIRD PLACE…

I don’t want to call Montana State coach Jeff Choate a “fall-back,” because he’s a viable candidate. He just happens to be behind Moore and Avalos. Choate was on Petersen’s staff from 2006-11, and Boise State players from that incomparable stretch have been on his bandwagon big-time the past five days. Choate is 28-22 in four seasons at MSU, but he has taken the Bobcats to the FCS Playoffs the past two seasons, including a trip to the semifinals last year. He’s a fireball, and he’s helped raise a lot of money for the Montana State program. I mentioned last week that Choate is 4-0 against Montana, the Bobcats’ first four-game winning streak over the Grizzlies’ in more than 40 years.

Bryan Harsin was officially introduced as Auburn’s new head coach at a Christmas Eve press conference. Harsin talked for a long time, as is his wont. He spent some time reflecting on Boise State—more time, frankly, than Petersen did during his introductory press conference at Washington seven years ago—a nod to spending 22 of the last 26 seasons of his football life in the Boise State program. “I bleed blue and always will,” Harsin said he told his Broncos players during a Zoom meeting last Wednesday. He added that he wants to help his old team in some way down the line. Harsin knows both of the major candidates to succeed him well. That would be a good place to start.

All NCAA college football players have an extra year of eligibility available to them in 2021, if they choose to use it—and if it’s offered by their schools. The first bit of clarity on Boise State’s “super senior” candidates came over Christmas, with Avery Williams and John Bates electing to leave the Broncos and prepare for the NFL Draft. Williams departs as perhaps the best special teams player in Boise State history and was named a first-team USA Today All-American as a return specialist. Bates is a prospect, top be sure, but injuries kept him from boosting his NFL portfolio during this COVID-shortened season. Also, offensive tackle Nick Crabtree has chosen to move on to a post-football life in Boise.

OFFENSE AND DEFENSE: YOU CAN HAVE BOTH

Boise State men’s basketball is (hopefully) back on the floor on New Year’s Eve against San Jose State in the Phoenix area, if they can figure everything out. To say the Broncos would be heavily-favored over the Spartans in this two-game series would be an understatement after dissecting the two routs of New Mexico. Take shooting, for example. After hitting a shade under 58 percent from the floor in Game 1 versus the Lobos, Boise State shot 60 percent in Game 2. It’s the first time in Leon Rice’s 11 seasons as coach the Broncos have shot at least 57 percent in consecutive games. On the other end, Boise State held New Mexico to a combined 33.6 percent from the field in the two games. There’s an amazing confluence of offense and defense with this team.

A landmark day in NFL history—as what many call “The Greatest Game Ever Played” helps popularize pro football forever. The NFL championship game went to sudden-death overtime for the first time in history, with Alan Ameche scoring on a one-yard dive to give the Baltimore Colts a 23-17 win over the New York Giants at Yankee Stadium. The nationally-televised game extended into prime time and created legions of new NFL fans. A nationwide media poll in 2019 concluded that it was indeed the best game of the NFL’s first 100 years.