Chris Petersen was never going to do this forever

Considering Coach Pete’s hesitation in becoming a head coach in the early 2000’s, it’s amazing that he’s lasted 14 seasons in the profession. 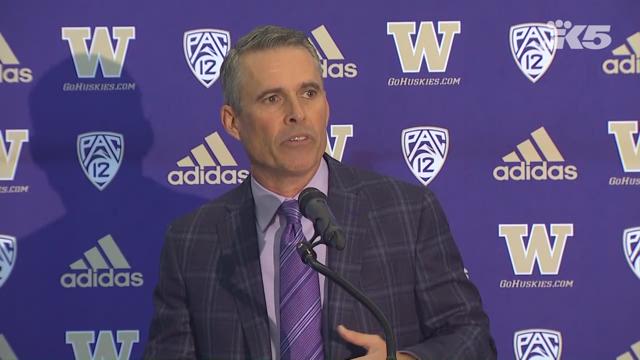 I was not surprised, but still stunned.  Does that make sense?  Chris Petersen stepped down Monday as head coach at Washington at the end of a 7-5 regular season that was disappointing but not disastrous.  But think about Petersen’s Boise State days.  All the way through his tenure as offensive coordinator under Dan Hawkins, he would say he wasn’t sure if he ever wanted to be a head coach.  When Hawkins left for Colorado, Pete professed to be ready to do it—and did he ever do it, going 92-12 with the Broncos.  It looked like burnout finally got him in 2013, and at that time, it was the challenge of a new job in Seattle that refreshed him.  Now it’s déjà vu on the burnout meter, and this time he’ll “recharge.”

Petersen will coach the Huskies in their bowl game—and then turn the reins over to his successor, Jimmy Lake, the UW defensive coordinator who was on Pete’s staff at Boise State in 2013-14.  Petersen will then assume an advisory role for Huskies athletics.  He was 54-26 in his six seasons in Seattle and is 146-38 between Washington and the Broncos.  Pete was the fifth-fastest coach in major college football history to reach 100 career victories (it took him 117 games).  Petersen led the Huskies to two Pac-12 Championships, three consecutive New Year’s Six bowls and a College Football Playoff appearance in 2016.  That in addition to his two Fiesta Bowls, four top-10 finishes in the polls, three WAC championships and one Mountain West title at Boise State.

Slideshow: Chris Petersen steps away from the Washington Huskies as Jimmy Lake takes over as head coach

Only Petersen’s bombshell could overshadow Boise State’s depth chart lightning bolt.  That list has been static since September, outside of season-ending injuries.  But on Monday, the depth chart was updated, and Jaylon Henderson is the No. 1 quarterback going into the Mountain West championship game against Hawaii this Saturday on the blue turf.  I do not subscribe to the theory that something fishy is going on with Hank Bachmeier and Chase Cord.  At this point, with the Broncos 3-0 under Henderson, coach Bryan Harsin is simply going with the QB that gives them the best chance to win, and he and the staff are going to roll with Henderson.  He has thrown for nine touchdowns against one interception in this stretch, and his teammates have really responded to him.

The title game against Hawaii is a fitting stage for Henderson.  His first significant non-garbage time action of his career came in the 59-37 win over the Rainbow Warriors in October, when he threw his only other touchdown pass.  It was then that we knew Henderson was not just a kneel-down quarterback, as he went 6-of-10 for 82 yards and the TD in the heat of the battle.  That’s the night Bachmeier suffered his hip injury, and after the game, there was never a thought that Cord wouldn’t be the replacement while Bachmeier was on the shelf.  And that’s the way it went at BYU, the Broncos’ only loss of the season.  But when both QBs were unavailable for the New Mexico game, the story of the 2019 season turned in a way no one could have predicted.

The aforementioned depth chart, interestingly enough, reads the same way as it did for the Florida State game at running back: Robert Mahone, Andrew Van Buren, and George Holani, in that order.  Seems like Boise State could have easily moved Holani to the top, as he is established now as the Broncos’ feature back.  Holani had 18 carries at Colorado State, Van Buren two—including a key 15-yarder that set up a touchdown—and Mahone zero (although he did play).

INDEPENDENCE IT IS IN PROVO

There’s no championship or all-conference honors to play for, and there’s no realistic shot at a New Year’s Six bowl.  But BYU has ESPN and will now pair up with the network for seven more years.  Brett McMurphy of Stadium tweeted last night that the Cougars and ESPN have agreed on a deal thru 2026 season to televise BYU’s home football games.  The deal also will guarantee the Cougars a contracted bowl game each year when bowl-eligible.  The fact remains: the Cougars will have to be really, really good to appear in a bowl game that anyone watches.  Pride rules, though.  BYU will never return to the Mountain West.

DENVER WANTS TO KEEP RYPIEN AROUND

Former Boise State star Brett Rypien, who was released by Denver Saturday when fellow rookie quarterback Drew Lock was activated, has cleared waivers and appears to be headed back to the Broncos’ practice squad.  Mike Klis of KUSA-TV tweeted Monday afternoon that Rypien was “heading into Broncos headquarters to sign back with practice squad.”  The undrafted free agent was promoted to the active roster a month ago and backed up Brandon Allen for three games in November but didn’t take a snap.  Lock started his first game on Sunday and led Denver to a 23-20 win over the L.A. Chargers.

You can thank a massive contractor’s convention in Las Vegas next March for Boise State’s two absurdly-early Mountain West games this week.  The resulting logjam in hotel rooms and jacked-up room rates in Vegas has forced the Mountain West Tournament to move up a week, hence this “week on an island.”  Boise State is, ahem, fortunate enough to play its first conference game Wednesday night in The Pit at New Mexico.  I guess we should check the Lobos’ record so far.  They’re 7-2, with a 25-point loss to Auburn that they followed with a nine-point win over Wisconsin last week at the Legends Classic in New York.  Last time out, UNM held off Montana 72-63 Sunday in Albuquerque.

THE INFAMY OF LAST SEASON

Last time at The Pit?  It was the second-to-last game of the regular season last March, and it was one of those legendary losses—the ninth of the season by one point or in overtime against one win as Boise State fell 73-72.  It was a little different than the others, though.  The Broncos had trailed New Mexico by 12 points at halftime before clawing their way back into it.  They had two leads in the final 2½ minutes.  Then, as happened so many times last season, Boise State couldn’t get the stop it needed.  The Broncos allowed two offensive rebounds in the final 35 seconds.  And because of miscommunication, they didn’t even get a shot off on the last possession of the game.  This season, Boise State is already 2-0 in overtime games.

In a driving rainstorm at Bronco Stadium, Boise State outlasts Appalachian State and future Dallas Cowboys linebacker Dexter Coakley, 17-14, in the second round of the Division I-AA playoffs.  Two Tony Hilde-to-Ryan Ikebe touchdown passes and a Greg Erickson field goal got it done offensively, and the defense did the rest for the Broncos, who notched their 12th win of the season on their way to the Division I-AA national championship game.