Before anyone had a clue that Chris Petersen was in his final season at Boise State, there were a couple verbal commitments from names familiar to this day. 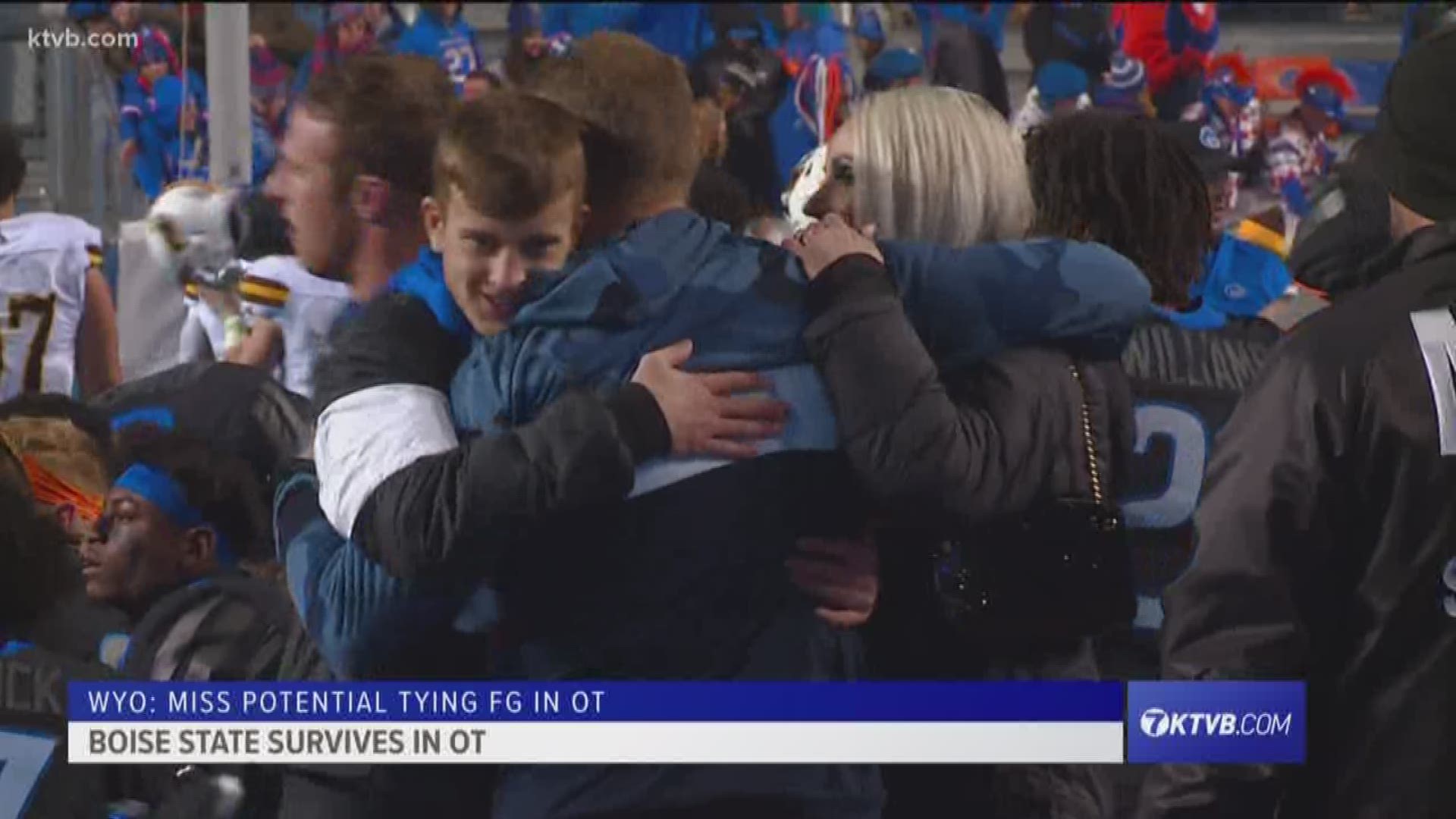 Almost six years after Chris Petersen left Boise State for Washington, there are two of his recruits still active for the Broncos, and they’ll get as loud a welcome as anyone on Senior Night before the New Mexico game Saturday.  David Moa committed November 21, 2013.  Then when the 2014 recruiting class blew up upon Coach Pete’s departure, Moa stayed the course with Bryan Harsin’s program.  And what a ride it’s been since.  Moa redshirted in 2014 and was a backup as a redshirt freshman.  Then came the breakout season in 2016, when he led the Mountain West with 8.5 sacks.  The following year saw a downtown arrest and a dropoff in production, and last season was all but wiped out by injury.  But he’s proud to say he has “grown up,” and his teammates responded by naming him a captain as a senior.

Kekoa Nawahine committed to Boise State nine days before Moa while he was starring as a senior for Rocky Mountain High in Meridian.  Nawahine’s plan was to go on an LDS mission before starting school, and that he did.  He returned for the 2016 season, technically as a true freshman, and worked his way into the rotation at safety.  Nawahine’s sophomore year was his breakout, as he amassed 108 tackles (second only to Leighton Vander Esch), recovered a fumble and made three interceptions.  He cooled off somewhat as a junior but was often out of his natural position the last two months as he compensated for the loss of DeAndre Pierce.  Nawahine is the only Bronco this year with more than one pick.

If it seems like Senior Night is early this year (third-to-last game of the regular season), well, it is.  It’s the earliest one in 17 years.  There’s a lot of football still to be played for Moa, Nawahine, and their 15 fellow seniors.  They are, by the way, Khafari Buffalo, Akilian Butler, Garrett Collingham, Emmanuel Fesili, Chase Hatada, Jaylon Henderson, John Hightower, Garrett Larson, Matt Locher, Sonatane Lui, John Molchon, Matt Pistone, Nicholai Pitman, Eric Quevedo, and Eric Sachse.  Curtis Weaver is not slated to be introduced with the group since he’s a junior.  But, of course, it’s all but certain that this will be his final regular-season game on the blue turf.  Weaver goes into the New Mexico game with 12.5 sacks for the season, one behind suspended Ohio State star Chase Young.

THE BRONCOS ALWAYS MISS THIS GUY

On Monday, Boise State coach Bryan Harsin had no season-ending injuries to report.  But as the week went on, it became apparent that DeAndre Pierce’s injury was worse that previously thought.  Pierce crawled off the field in the Wyoming game with a “high ankle sprain,” according to Harsin, and later it was discovered that there was “a little bit of a fracture up there.”  Harsin says there’s an outside chance Pierce can make it back for the Broncos’ bowl game.  The coach also said the problem is in the same area as Pierce’s injury at Florida State on Labor Day weekend, but not necessarily related.  It’s the story of his career.  Pierce has played in just 35 of a possible 49 games the past four seasons.

THIS ONE WILL BE ENLIGHTENING

Want a measuring stick for the Boise State-Utah State showdown next week?  The Aggies host Wyoming Saturday in Logan (it’s a day game, wouldn’t you know it).  Just in the nick of time, the 2018 version of Jordan Love appears to have resurfaced for USU.  In the midst of a fairly frustrating season, Love was 30-of-39 yards for 388 yards and two touchdowns with no interceptions in last week’s win at Fresno State.  The key for the Cowboys will be disrupting Utah State’s offensive line the way they did last week on the blue turf.  USU will have to return the favor without star linebacker David Woodward, who’s out for the year with an undisclosed injury.  Elsewhere, the batte for the driver’s seat in the east Division of the Mountain West is tonight at the stadium formerly known as Qualcomm: Fresno State at San Diego State.

It’s hard to fathom College of Idaho not completing an undefeated regular season Saturday in Caldwell against Montana State-Northern.  The Northern Lights have lost 36 straight Frontier Conference games.  So there you go.  Headlining Senior Day for the Coyotes will be Darius-James Peterson, who’s playing his final regular-season game at Simplot Stadium.  The electric dual-threat quarterback is 415 yards away from becoming the first Yote to hit the 10,000-yard mark in career total offense.  Peterson could get it Saturday (if he’s in the game long enough).  Up north, star wide receiver James Cotton sure would help Idaho’s chances of upsetting Sacramento State Saturday in the Kibbie Dome.  But Cotton left the loss at Montana last week with an injury, and coach Paul Petrino called Cotton a not-very-encouraging “day-to-day.”

Tonight in ExtraMile Arena, Boise State hosts UC Irvine, a 31-win team last season that returns four of five starters.  The Broncos will be without Arizona transfer Emmanuel Akot, tonight and every night thereafter for the rest of this season.  The NCAA on Thursday denied Akot’s appeal for immediate eligibility from the NCAA Committee for Legislative Relief.  Akot will have two years of eligibility remaining beginning next fall.  Sources told B.J. Rains of the Idaho Press that Akot’s situation was different than another former Wildcat’s waiver attempt.  Alex Barcello’s request was considered family-related and was approved (he’s now at BYU).  Akot’s was based on Arizona’s troubles surrounding the Adidas scandal and was denied.

SO ABOUT THAT DEFENSE

How concerned should the Broncos be about their defense after the 106-75 walloping they absorbed at Oregon last Saturday?  The speedy Ducks magically appeared with open looks all night as they knocked down 13 of 19 three-pointers.  Boise State is also looking for answers down low, as Oregon scored 18 points in the paint in the first half—then poured in 34 in the second.  Between layups and dunks, the Ducks made 21 field goals directly under the basket on 26 attempts.  R.J. Williams, undersized in the post, scored 11 points with eight rebounds, and Robin Jorch had just two points and two rebounds in 15 minutes.

Boise State wraps up play in the Preseason WNIT tonight, visiting UAB for a consolation game.  UAB also split its first two tournament games, defeating South Alabama 77-61 before falling at Oklahoma 82-75.  The Broncos then head into a week of big games, beginning next Wednesday at ExtraMile Arena against Washington State.  Also tonight, it’s Boise State’s much-anticipated NCAA Tournament appearance in women’s soccer, as the Broncos visit undefeated BYU.  Boise State star Raimee Sherle is tied for 10th in the country with 16 goals this season.  But the Cougars have an even more prolific scorer, Elise Flake, who has netted 18 goals and is tied for fourth in the country.

A day after a freak storm finishes dumping a November-record 7.6 inches of snow on Boise, Boise State and San Diego State play the coldest game in Albertsons Stadium history.  The temperature at kickoff was 9 degrees, but the warm-weather Aztecs were unfazed, bursting out to a 20-0 lead midway through the second quarter.  It was then the Broncos staged one of the biggest rallies ever, overcoming the deficit to win 38-29.  Boise State’s Jay Ajayi had 108 of his 134 rushing yards and all three of his touchdowns in the second half.  Attendance was 27,478, the Broncos’ smallest crowd in 11 years.  But the hardy, frozen fans compensated for the no-shows with their vocal cords.