It’s been over six years since Boise State’s shiny new football headquarters were finished. Since then, it’s been all quiet on the football facilities front. 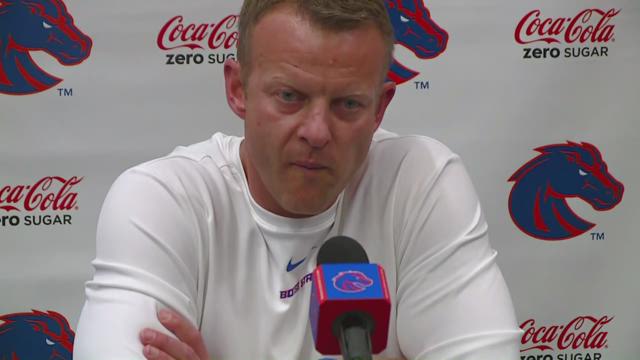 As a sixth-year coach with a 64-16 record at Boise State (and one who certainly gets phone calls), Bryan Harsin has some leverage.  And, as has happened before with Broncos coaches, Harsin may be exercising it a little bit.  In addition to his comments Sunday on the need for the Mountain West to promote its quality, he referred to the east side of Albertsons Stadium, intimating that it’s time to get that done.  Dan Hawkins stressed the need for an indoor practice facility when he was being courted by Power 5 schools, and the Caven-Williams Complex opened in 2005.  Chris Petersen got semi-serious with Stanford—and the Bleymaier Football Center opened in ‘13.  The stadium’s long-planned east side renovation is certainly overdue.  It’s basically the same as it was when the upper deck was added in 1975.

It’s a tangled Broncos-Huskies web going into the 2019 Las Vegas Bowl.  It just worked out this way—Chris Petersen in his final game at Washington and facing Boise State.  It'll actually be the rubber match in the series.  In 2007, it was Coach Pete's Broncos against Tyrone Willingham’s Huskies, and Washington won 24-10 during an otherwise sour season.  In 2012, there was the first Las Vegas Bowl meeting, and the first of two between Petersen and Steve Sarkisian.  Boise State won the bowl game 28-26 but got drilled by the Huskies 38-6 to open the following season.  Then came the only meeting between Coach Hars and Coach Pete in 2015 on the blue turf, with the Broncos winning the fabled matchup 16-13.  It may be awkward this time, but there's no choice but to embrace it.

ABOUT THE PLAYERS NOW

There’s a lot of angst about the Las Vegas Bowl being all about Chris Petersen.  But, at least locally, how much can be said about Coach Pete that hasn’t already been said?  As the game approaches, there’ll be plenty out there about the teams.  As for Washington, Petersen already has star tight end Hunter Bryant and left tackle Trey Adams out for the game against Boise State.  Both players are declaring early for the NFL Draft.  Adams has been up-and-down but is still a prime pro prospect.  Bryant had 52 catches for 825 yards (tops among the Huskies) and scored three touchdowns this season.  Pete says quarterback Jacob Eason is set to play in Vegas, even if he declares for the draft.

There were multiple standouts in Boise State’s win over Hawaii in the Mountain West championship game.  One Bronco that hasn’t really been acknowledged yet is linebacker Riley Whimpey.  He led the team with 10 tackles and teamed with Sonatane Lui for that epic fourth-down stop at the Boise State one-yard line in the second quarter.  It was a bounce-back of sorts for Whimpey after he almost put the Broncos in a predicament the day after Thanksgiving at Colorado State.  With Boise State nursing a 24-21 early in the fourth quarter, Whimpey was flagged for a late hit out of bounds, giving a CSU possession new life.  It was totally out of character for Whimpey.  Fortunately for the Broncos, they got out of that drive.

IDAHO FLAVOR IN THE COLLEGE HALL

Two of the more significant college football figures ever to come out of the state of Idaho will be inducted into the College Football Hall of Fame tonight.  Capital High grad Jake Plummer, who led Arizona State to within three points of an undefeated season and national championship in 1996, is one.  Would love to hear Jake The Snake’s induction speech.  Also going in is Dennis Erickson, who started his head coaching career at Idaho in 1982, the first of two stints with the Vandals.  Erickson led Miami to the 1989 and 1991 national championships.  His other head coaching stints were at Wyoming, Washington State, Oregon State and Arizona State.  Erickson is retired and living in Coeur d’Alene after a brief re-emergence earlier this year in the ill-fated Alliance of American Football.

Now that conference championship weekend is over, the new hires and potential new hires are filing in.  Former Boise State offensive coordinator Eli Drinkwitz, who as noted by Mike Prater on IST made $160,000 as the Broncos’ tight ends coach five years ago, has agreed to a six-year, $24 million contract to become head coach at Missouri.  Drinkwitz won the Sun Belt championship Saturday with Appalachian State, capping his one season there with a 12-1 record.  From the rumor mill comes the likelihood that Oregon offensive coordinator Marcus Arroyo will become UNLV’s new head coach, and that the much-traveled but recently idle Butch Jones will get the job at Colorado State.

The Nevada defense will have an interesting dynamic when it takes to the blue turf January 3 to face Ohio in the Famous Idaho Potato Bowl.  Wolf Pack coach Jay Norvell has shaken up his defensive staff, firing coordinator Jeff Casteel, secondary/cornerbacks coach David Lockwood and safeties coach Mike Chamoures.  The Pack allowed 32.1 points per game this season and has been particular vulnerable against the pass, allowing 260 yards per game, 10th in the Mountain West.  Most alarmingly, Nevada was torched for 31 touchdown passes.

Boise State’s next men’s hoops assignment is Wednesday night at Tulsa.  The Golden Hurricane is 7-2, but its schedule has been soft so far.  Tulsa’s best win is a 67-58 win over Vanderbilt.  If the Broncos take care of the ball the way they have been, they have a shot at a quality non-conference road win over an American Athletic Conference team.  Boise State is committing only 11.4 turnovers per game, the third-fewest in the Mountain West this season.  Its plus-2.4 turnover margin is also the third-best mark in the league.  On the women’s side, the Broncos’ Mallory McGwire is the Mountain West Player of the Week after leading the Broncos to wins over New Mexico and Colorado State.  Most visible was her game-winning overtime three-pointer against the Lobos.

LEADERS IN THE MW CLUBHOUSE

The out-of-place opening weekend of Mountain West men’s basketball leaves San Diego State, Utah State and New Mexico with 2-0 records.  Significantly for the Aztecs, their 10-0 overall record has catapulted them into the Top 25 at No. 25 in the AP Poll and No. 24 in the Coaches Poll.  SDSU has a 31-point win over Creighton and a 10-point victory over Iowa.  Utah State, already off the Coaches’ list, fell out of the AP Poll despite sweeping San Jose State and Fresno State.  It took the preseason MW favorite overtime to beat the Bulldogs.  The Aggies’ first stumble came the night after Thanksgiving when they lost 81-73 at Saint Mary’s.

In the Division I-AA semi-finals at Bronco Stadium, Boise State rallies past Marshall, 28-24, to advance to the championship game the following week on Marshall’s home field.  A battered Tony Hilde threw two first half interceptions and was replaced by Mark Paljatak before halftime.  Paljatak ate into a 24-7 Marshall lead with a touchdown pass to Lee Schrack.  Hilde returned in the second half and hit Schrack for the winning TD.  Coach Pokey Allen had said he’d ride a horse down Broadway if 20,000 fans showed up.  They did—and he did.