Boise State football: Bolt is all about Boise

When you grow up in Boise and watch Boise State win, oh, like 211 games during your lifetime, you’re probably drawn to the blue turf. 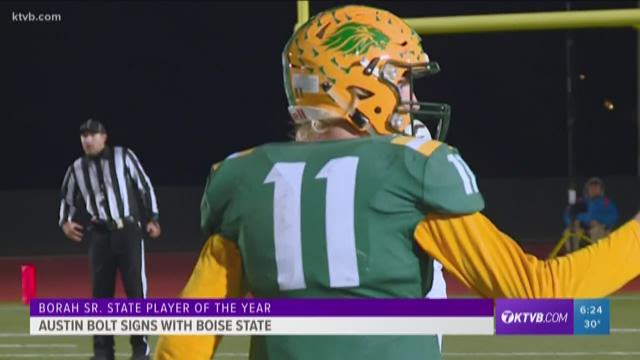 The most prized college football recruit in the state of Idaho looked around—a lot.  Wisconsin and Texas Tech stepped in at the last minute and tried to convince Borah High star Austin Bolt to wait until the February signing day and see what happens.  But in the end, Bolt decided that his dream school was still that, and on Wednesday he signed with Boise State.  But where in the world will the Broncos play Bolt?  For the Lions, he threw for touchdowns, ran for touchdowns and caught touchdowns.  Bolt was responsible for a staggering 36 TDs this season, 26 of them on the ground.  Right now, Boise State will plug him in at tight end.  The Broncos look at him as a Jake Roh-type, an athletic tight end who can stretch the field.  Will he be the next big local star?

SMOKE SIGNALS OUT FOR A SIGNAL-CALLER

Boise State signed more players than it thought it would Wednesday—15 in all.  One was not a quarterback, though.  Brandon Huffman of 247 Sports noted on Idaho SportsTalk that Carl Richardson of Salinas, CA, visited Boise State two weeks ago.  Richardson did not sign with anybody Wednesday.  If he has his heart set on a Power 5 school, that was probably a good move, because several of those will be scrambling for QBs in the next seven weeks.  The Broncos will be looking themselves.  It can happen.  Witness Montell Cozart, a late graduate transfer in 2017.  And the addition of unknown JC transfer Jaylon Henderson in 2018.  “Would Henderson fill a Cozart-type role?” we wondered at the time.  “Certainly not,” we deduced.  Well, he’s been even better than that.

Some surprising signings and non-signings for Boise State.  The silent commits from Tuesday ended up being Rodney Robinson and Divine Obichere.  Robinson is a 5-10, 165-pound safety from San Bernardino, CA.  You wonder about that size until you think about the remarkable productivity of the Broncos’ Kekaula Kaniho.  Obichere is a 6-4, 295-pound defensive tackle from Long Beach City College.  You don’t have to wonder about Obichere’s size.  He was kind of a package deal with JC teammate Shane Irwin and visited campus with him.

Two commits did not ink their letters Wednesday.  One was wide receiver Chance Luper of Fort Worth.  Luper tweeted Wednesday that he had received a late offer from Missouri (and now he may be conflicted).  It’s probably no coincidence that Luper’s dad, Chance, the co-offensive coordinator at TCU, is reportedly joining Eli Drinkwitz’s staff at Mizzou.  The other is defensive tackle Nick Booker-Brown of Houston, whose brother Josh was Boise State’s 2019 Scout Team Defensive Player of the Year.  Surely there’s some disappointment in that, but getting 15 of 17 commits to sign ain’t bad.

There’s been a lot of talk about Boise State’s George Holani becoming a 1,000-yard rusher.  Holani needs just 21 yards in the Las Vegas Bowl to extend the nation’s longest streak of 1,000-yard runners to 11 straight seasons.  But what about John Hightower?  There hasn’t been a lot of talk about the fact that the Broncos’ explosive wideout is 73 yards away from a 1,000-yard receiving season.  Hightower’s total focus, of course, is on helping Boise State beat Washington in Las Vegas.  He didn’t make the trip to the 2019 First Responder Bowl in Dallas because he was academically-ineligible.  The bowl opportunity is a big deal to Hightower.

THE HUSKIES’ VERSION OF ‘COACH K’

Of all the Boise State ties still on the Washington staff, there’s nobody who has deeper Bronco roots than Pete Kwiatkowski.  He was a Division I-AA All-America defensive tackle for the Broncos when he finished his playing career in 1987.  After that, Kwiatkowski spent 17 seasons over two different stints as a Boise State assistant.  He was the defensive coordinator in his final four years of an eight-season run under Chris Petersen, then followed Coach Pete to Seattle.  Officially, Kwiatkowski is UW’s co-defensive coordinator—in the summer of 2018, he graciously relinquished his play-caller duties in order to help keep Jimmy Lake on the Huskies staff.  Here’s hoping that Kwiatkowski is rewarded by regaining the full-time D-coordinator’s post now that Lake is the new head coach.

As Boise State men’s hoops packs for Hawaii and the Diamond Head Classic (where it opens against Georgia Tech on Sunday), Derrick Alston Jr. is leading the charge on a holiday coat drive to support the Boise Rescue Mission.  Maybe Alston was inspired by his appearance at 7 Cares/Idaho Shares Day last Saturday.  But he’s all in on this project to collect new and gently-used coats a week from Saturday at the Broncos’ game against Cal State Northridge.  Donate a coat, and you’ll receive a discounted $7 ticket to attend the game.  As for the game at hand, Georgia Tech fell to 4-5 last night after being smothered 65-47 by Ball State in Atlanta.

STEELIES YIELD NOTHING IN NORFOLK

Don’t look now, but the Idaho Steelheads have won three games in a row.  They got the third 2,500 miles away from Boise, blanking the Norfolk Admirals 2-0 Wednesday night.  The contest was scoreless deep into the third period—until the Steelheads’ Ondrej Vala scored the first goal of the night with just 4:12 left in regulation.  Will Merchant added an empty-netter in the final minute, and all the while, goalie Tomas Sholl was stopping all 21 Norfolk shots he faced to earn his ninth career shutout.

Former NFL quarterback Jake Plummer is born in Boise.  After leading the Capital Eagles to a state A-1 championship in 1991, Plummer went on to Arizona State, where he came within a touchdown of leading the Sun Devils to a national championship before falling to Ohio State in the Rose Bowl on New Year’s Day, 1997.  Jake played 10 seasons in the NFL—six with the Arizona Cardinals and four with the Denver Broncos—before abruptly retiring after the 2006 season.  And last week he was inducted into the College Football Hall of Fame.  Jake Plummer…45 years old today.