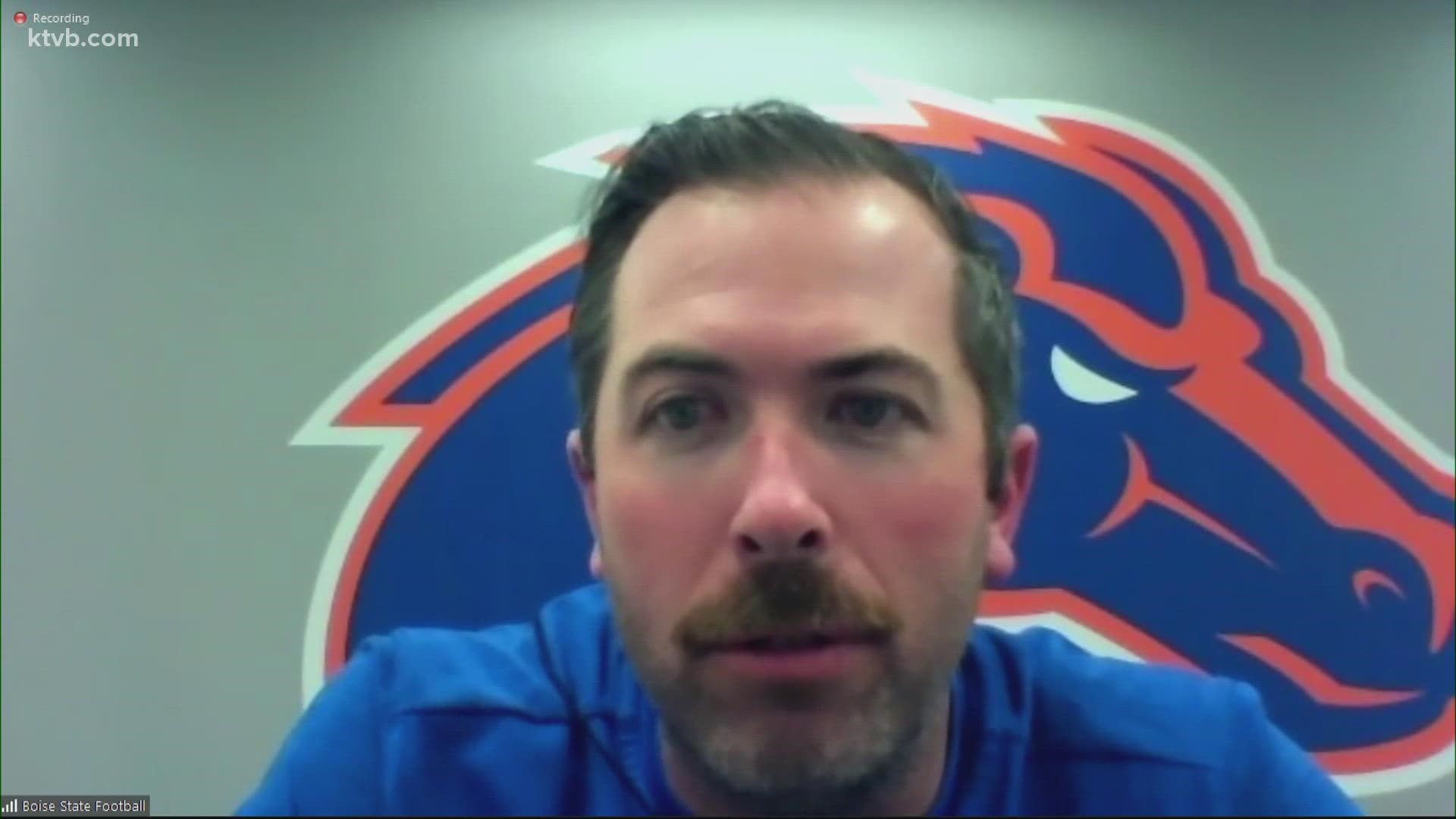 Boise State athletic director Jeramiah Dickey’s “six games, six sellouts” goal was a longshot, but it’s been a rallying cry. And every time the Broncos have laid an egg this fall, something good has happened in time for the next game on the blue turf, and the fans have come back. Boise State has averaged 36,023 per game, with a high of 37,423 against Nevada on that sunwashed day last month. There’ll probably be some dropoff for the Wyoming game Friday night—this will be the Broncos’ first cold weather game of the season (although it really won’t be cold). But the team has some mojo going. There’s one thing that Boise State fans can control as the university postures itself for a possible future Big 12 invitation: what the stands look like.

Something we’ve never seen at Albertsons Stadium that is embarrassing for Fresno State: the alcohol-fueled fights in the stands last Saturday at Bulldog Stadium. It’s pretty easy to find the video. Pure ugliness. The Bulldogs not only lost badly on the field in front of their first sellout crowd in seven years, some bad-apple fans dealt their image a blow. It’s hard to imagine that happening at Boise State. But now that alcohol is served at Broncos home games, well, don’t abuse it.

TIGHTENING UP THE OFFENSIVE TRENCH

Boise State is hoping the strides made by its offensive line since the bye week aren’t a mirage, because they are solid. The move of Jake Stetz to center seems to have worked, as there have been no errant snaps to Hank Bachmeier during these last two Broncos wins. Garrett Curran’s return to the lineup has been a positive, too. And Bachmeier hasn’t been under as much duress. Then there’s the run game. In the past two games, Boise State has rushed for 182 yards per game. In the previous seven, the average was 84 yards. How about this stat coming out of the Fresno State game? The Broncos have committed just one false start in each of their five road games this season despite loud opposing crowds

You may notice a lot of San Jose State and Colorado State fans around town this weekend—clad in blue and orange. Boise State needs both Utah State and Air Force to lose another game for the Broncos to be in the hunt for a Mountain Division title in the Mountain West. (They also need to beat Wyoming Friday night, don’t you know.) The Aggies face the Spartans and the Falcons take on the Rams Saturday, with both games on the road. The best shot would appear to belong to San Jose State, which almost took down Nevada last week. The Spartans have Nick Starkel back at quarterback, and they’re a different team when he’s calling signals. CSU is just reeling right now, having lost three games in a row. And one thing you know about Air Force: those guys’ heads are always squarely on their shoulders. Advantage Falcons.

MUMA’S PROTOCOL ON THE BLUE

Wyoming linebacker Chad Muma, the reigning Mountain West Defensive Player of the Week, is plenty good on the field, but his life gets really interesting on the sidelines. Muma was diagnosed with Type I Diabetes when he was 13 and spent his teen years learning how exercise affects his body. Now, Muma is beholden to a regimen that has him cautious about what he eats the day of a game. He checks his blood sugar numbers throughout the day and sometimes gives himself insulin before taking the field. Muma checks his numbers in the first quarter, at halftime, in the third quarter and after the game. He may even have to give himself insulin during the game, but the condition has never kept him from playing. Through it all, Muma is second in the conference in tackles with 89 (he led the league last year).

The Frontier Conference championship race has come down to the final Saturday of the regular season for College of Idaho. The Coyotes face Carroll College in Helena, and there’ll be some scoreboard watching going on while they try to beat the Fighting Saints. If the Yotes win and Rocky Mountain loses at Montana Western, C of I would clinch an outright conference title and a berth in the NAIA Playoffs. But all Rocky has to do is beat Western to check those two boxes themselves. In that case, a Yotes win would still mean a share of the Frontier crown, but not a playoff spot.

GOOD TIMES IN THE GALLATIN VALLEY

Idaho can play spoiler Saturday in Bozeman, but it’ll be a tall order to stop the runaway train that is Montana State. MSU saw coach Jeff Choate bolt for a spot on the Texas coaching staff in January after leading the team to the semifinals in the 2019 FCS Playoffs—and now it’s even better under Brent Vigen. The Bobcats, ranked third in the FCS, are 8-1 and are undefeated in Big Sky play. Montana State's defense has held its last 14 regular-season foes to 20 points or less. That could put a crimp in the Vandals, who got a record six rushing touchdowns last week from Roshaun Johnson. By the way, the Idaho men’s basketball team and Long Beach State put on a show Tuesday night amidst the pageantry of the grand opening of ICCU Arena. The 49ers beat the Vandals 95-89 in overtime.

The Famous Idaho Potato Bowl is losing is prized spud. The game’s executive director, Kevin McDonald, will retire next March after 15 years overseeing Boise’s bowl game. McDonald weathered the storm of declining attendance, commonplace in non-New Year’s Six bowls, and took sponsorship to the next level, beginning with the Idaho Potato Commission deal. Then he engineered a seamless transition to ESPN Events when the Worldwide Leader acquired the bowl in 2013. We might not still have this game if McDonald wasn’t around.

The closest call of Boise State’s unbeaten regular season, as Anthony Montgomery boots a 37-yard field goal on the final play of the game to beat San Jose State, 23-20. The Broncos had trailed 20-12 midway through the fourth quarter before mounting their rally, helped by Ian Johnson. The sophomore sensation had suffered a partially collapsed lung earlier in the game but played through it to the tune of 149 yards rushing. Johnson ended up spending five days in a San Jose hospital and missed the following week’s game after returning to Boise.