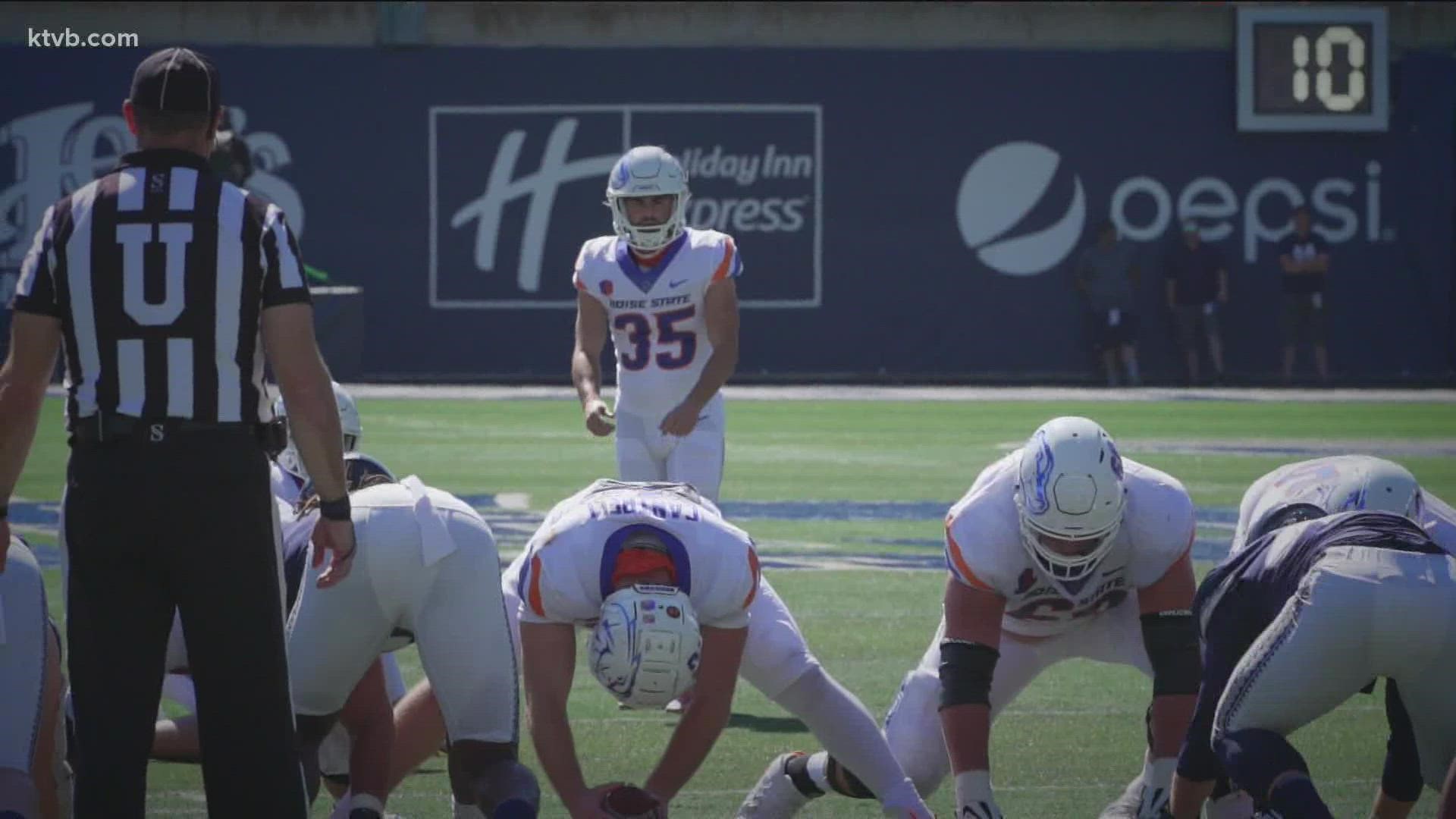 Boise State athletic director Jeramiah Dickey doesn’t consider his football team’s 3-4 start a big picture item. Dickey’s big picture is his facility assessment study, which he said will be done by December 1 Wednesday on KTIK’s Idaho SportsTalk. “This will lead to a (capital) campaign,” Dickey told Mike Prater and Johnny Mallory. While he stressed that it’s a campus-wide analysis, he did zero in on Albertsons Stadium and its various options. “Our stadium’s loud—can we make it louder?” Dickey said. “I think closing in one of the end zones would help that.” But that won’t happen without more club level seats, loge boxes and suites. “Because you need something to pay for it,” said Dickey. He’s pleased with the results of his push for attendance; the Broncos are averaging over 36,000 fans per game.

CAN TYLER CLIMB THE LADDER?

With the running game struggling mightily and injuries running rampant, Boise State has dipped into the depths of it depth chart. Last Saturday behind third-stringer Andrew Van Buren, the Broncos went to Taequon Tyler instead of Tyler Crowe. We always wondered what Tyler would look like when the popcorn was poppin’ (he got in during mopup against UTEP last month). Tyler peeled off a nice-looking 14-yard gain against Air Force. Might he get more of a look during the bye week? Only the coaching staff knows what he looks like in practice—pass protection, executing assignments and such. We still don’t know much about him, but I am intrigued. Tyler, a 5-9, 210-pound a junior college transfer, missed all of last season due to a torn Achilles suffered in the summer of 2020.

MOMENTS OF TRUTH IN THE MOUNTAIN WEST

What’s more reliable—the polls or the point spreads? Because there’s a conflict in one of the biggest games in the Mountain West this week. San Diego State is ranked 22nd in AP, even with its disappearing-act offense. So who’s favored when the Aztecs visit Air Force Saturday? The Falcons by 3½. Oddsmakers are trusting Air Force’s 6-1 record, its methodical offense and disciplined defense. I think I’m going to watch. The other showdown is in the San Joaquin Valley, a crucial one in the West Division race. Fresno State is favored over Nevada by three. The Bulldogs are coming off a 17-0 shutout of Wyoming in Laramie, and the Wolf Pack has, well, Carson Strong.

Boise State men’s basketball finished fourth in the Mountain West last season, and the Broncos are picked to finish fourth in the conference this season. They had been picked second a year ago, with four first-place votes. It’s all about the finish after Boise State didn’t get it done down the stretch last winter. Derrick Alston Jr. is gone, but the Broncos should be a lot more balanced this time, with more equitable distribution between Abu Kigab, Marcus Shaver Jr., Devonaire Doutrive, Emmanuel Akot and Mladen Armus. The story in the media poll is Colorado State. Niko Medved has the Rams on the fast track, and they’re picked No. 1 after making the semifinals of the NIT last March. San Diego State and Nevada are close behind at Nos. 2 and 3.

MERRITT ACROSS THE PACIFIC

Troy Merritt took last week off from the PGA Tour. He was no doubt saving energy for a trip overseas, as he’s playing the Zozo Championship this week at Narashino Coiuntry Club in Inzai, Japan. It’s only the second tournament of the new season for Merritt—he missed the cut two weeks ago at the Shriners Children’s Open in Las Vegas and tied for 16th a month ago at the Fortinet Championship in Napa, CA. The Zozo Championship debuted in 2018 as the first PGA Tour event in Japan.

This series may not end up the way Boston wants it to, but the Red Sox still have Kyle Schwarber. The former Boise Hawk is doing what he does in the playoffs, hitting three home runs in nine games as Boston heads to Houston trailing three games-to-two in the ALCS. The biggest knock was Schwarber’s grand slam in the first inning of Game 4 (although the Astros came back to win 12-3 Monday night). Schwarber’s first playoff appearance came in the 2015 Wild Card series for the Cubs against Pittsburgh, and he promptly homered. He hit two more out and batted .500 in the divisional series that year versus St. Louis. Then came two more homers in the NLCS loss to the Mets. Schwarber missed virtually all of the 2016 season with a torn ACL, but he returned in the World Series and hit .412 in the Cubs’ milestone win over Cleveland.

YOTES LOOK TO KEEP PACE IN THE FRONTIER

College of Idaho is back after a bye week, hosting Montana Western Saturday in the only meeting between the teams this season. With four weeks left in the regular season, Rocky Mountain leads the Frontier Conference at 5-1, with the Coyotes and Montana Western a game back at 4-2. So this game is pivotal. The Yotes will try to dance with who brung ‘em—their defense leads the Frontier in every major category, allowing just 279 yards and 18 points per gane. Opponents have been held under 300 yards in five of the six games this season. By the way, since reviving football in 2014, the Yotes have never lost coming off a bye.

Best wishes to Todd Simis, who may or may not be coaching his final game when his Capital Eagles face the Timberline Wolves Friday night at Dona Larsen Park. Simis has had a lot of success at Capital since 2004, but it’s his first six seasons as a head coach that have always stuck out to me. When Timberline opened in 1998, it siphoned off a good portion of Boise High’s talent and much of its coaching staff. But Simis stayed behind to be the Braves’ head coach. He was 4-51 at Boise in a most difficult situation, and when he applied at Capital, some connected to the school wondered why the Eagles would hire Simis—and even protested. But they didn’t know him. He’s a high-character guy and has gone 133-54 at Capital. Simis has done a wonderful job throughout his career.

Idaho fires head coach Robb Akey two-thirds of the way through his sixth season the day after a 70-28 loss at Louisiana Tech. Akey had led the Vandals to an 8-5 season and a thrilling Humanitarian Bowl win in his third year in 2009, but Idaho faded after that. The loss in Ruston saw the Vandals allow 839 yards of total offense while clinching their 12th losing season in 13 years. It was Idaho’s 17th loss in its last 20 games and left Akey with a career record of 20-50. Offensive coordinator Jason Gesser was named interim coach.