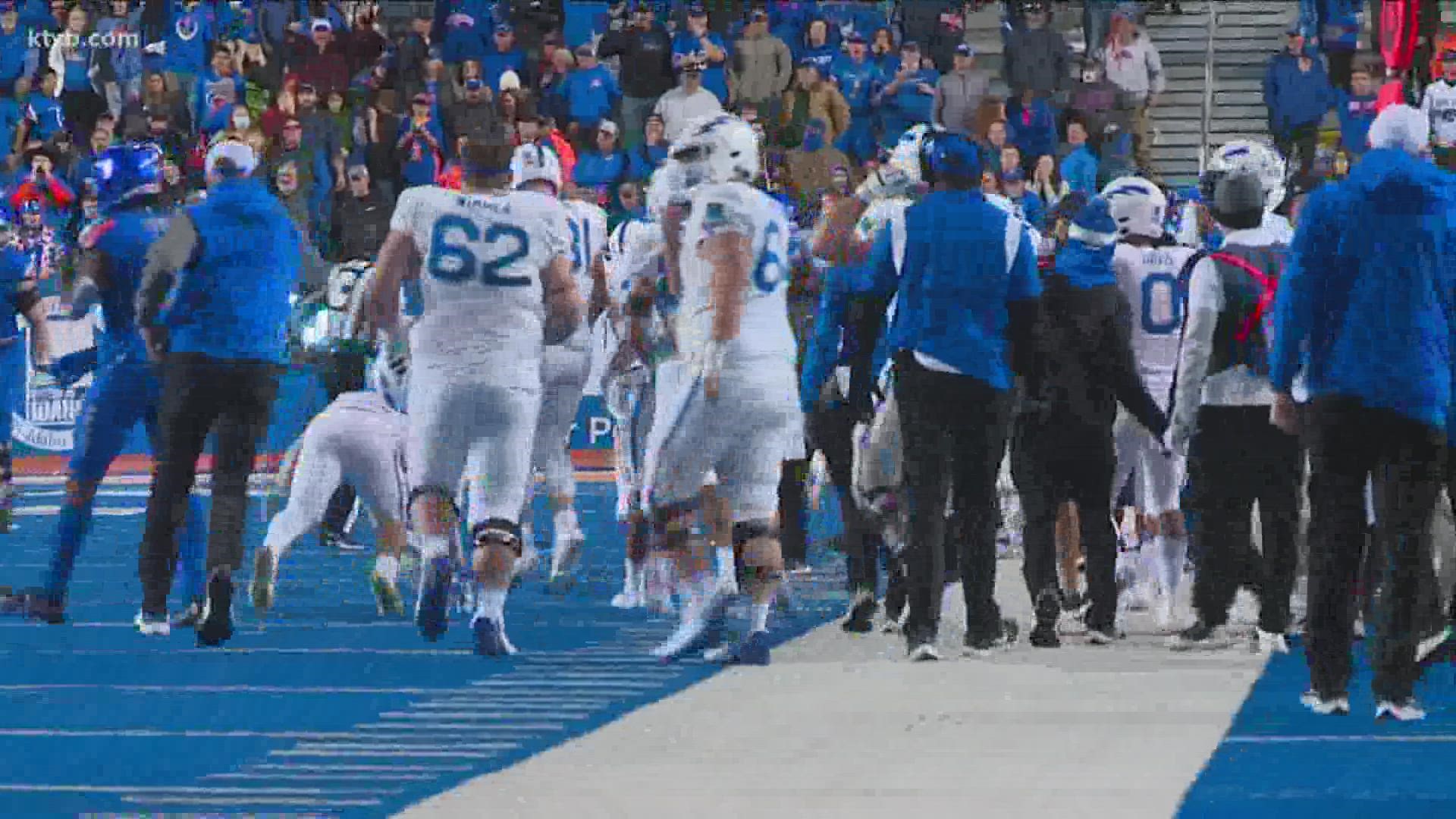 You can talk about the 1,000-yard rusher streak, and consecutive 10-win seasons and division titles and bowl games and all that. All of those are either up in the air or out the window this season for Boise State. There’s another streak that’s in perilous territory, and it’s one that is a major point of pride with the Broncos. They have recorded 23 straight winning seasons, the longest current run in the nation. Boise State is 3-4 right now. There are five games left on the schedule.The Broncos need to win four to clinch a winning season and extend that streak, and they need to win three to be bowl-eligible. If they’re fortunate enough to be 7-5 or 6-6, this year’s bowl destination would seem to be the hometown Famous Idaho Potato Bowl, a game they haven’t played in since 2005. A letdown? Sure. But now it might be a goal.

LEFT SIDE OF THE PILE GOT PUSHED

It’s a bye week for Boise State, but there’s more than enough film from the loss to Air Force to keep the Broncos occupied. Not to peel off every name involved, but the Falcons really picked on the left side of the Boise State defense most of the night Saturday. Air Force pounded that area out of the gate as it chewed up 75 yards and converted two third downs and one fourth down on its opening touchdown drive. The defense didn’t give up chunk plays on the ground—Falcons leading rusher Brad Roberts busted off one run of 21 yards and quarterback Haaziq Daniels broke loose on a 25-yard TD dash. But nothing went the other way. Outside of Scott Matlock’s two sacks, the Broncos had one tackle-for-loss for one yard. The defensive line situation is like the O-line—what they have now is the hand they’ve been dealt.

One Mountain West team remains in the Top 25. San Diego State moved up to No. 22 in the AP and No. 21 in the Coaches Poll in spite of itself. In a game that was agonizing to watch last Friday night, the Aztecs and San Jose State combined for four field goals in regulation and went into overtime tied at 6-6. SDSU survived 19-13 in two OTs. Sheesh. Among others receiving votes, Air Force is fifth in line to get in the AP Poll and sixth in line on the Coaches list. The Falcons and Aztecs play this Saturday in Colorado Springs. Fresno State got one vote in the Coaches Poll. For some reason, Nevada has exactly zero votes. To me, the Wolf Pack is still the favorite to win the West Division—and maybe the Mountain West title.

WOULD THE ZAGS CONSIDER IT NOW?

Mountain West commissioner Craig Thompson let a bulldog out of the bag last Friday with his one-word answer to a Mike Prater question on Idaho SportsTalk. “Will conversations with Gonzaga ever resume again?” asked Prater. “Yes,” stated Thompson. Then he said he had to run. Prater interviewed longtime Zags beat writer Jim Meehan of the Spokesman-Review in Spokane Monday on that very subject. “I think there would be more interest (right now),” said Meehan. “I don’t know how far to stretch it beyond that. But yeah, there’s some appeal from Gonzaga’s standpoint.” Obviously, BYU’s departure to the Big 12 in 2023 changes the makeup of the West Coast Conference. Said Meehan, “If it was appealing enough for them to explore it three years ago, it was well within range to bring the conversation up again at some point.”

BONNIES GIVE THE SCHEDULE A BOOST

If Boise State men’s basketball wants to begin the redemption process right off the top this season, it has its chance. The Broncos, who lost five of their last six games from late February into March last season, will face St. Bonaventure in their third game of the season to begin the Charleston Classic on November 18. The Bonnies, a much-hyped team since the end of last season, were ranked 23rd in the Preseason AP Poll on Monday. Boise State didn’t receive any votes, but Colorado State and San Diego State did (11 and five points, respectively). The Broncos open the season three weeks from tonight at home against Utah Valley.

A FIRST FOR BATES, A REAPPEARANCE FOR DEAYON

There are two former Boise State standouts of note coming out of Week 6 in the NFL. John Bates finally logged his first NFL catch, covering seven yards in the Washington Football Team’s 31-13 loss to Kansas City on Sunday. Bates continues to get increased playing time as starting tight end Logan Thomas sits on the injured list. And Donte Deayon, ever resilient, made four tackles in the L.A. Rams’ 38-11 rout of the New York Giants. It was Deayon’s first NFL game since December 29, 2019. He’s 27 years old now (seems older doesn’t he?).

Fun-loving Nick Rolovich isn’t having much fun right now. But it was his choice. Rolovich was fired as head coach at Washington State on Monday, the deadline for state employees in Washington to be fully vaccinated against COVID-19. Rolovich has refused the vaccine but hasn’t said why. He reportedly applied for a religious exemption and was denied. Consequently, the former Hawaii coach walks away from a $3 million per year contract. All four of Rolovich’s unvaccinated assistant coaches were released, too. Rolovich was 28-27 in four seasons at UH before going 5-6 in his brief stint at WSU. He hired an Elvis impersonator to follow him around at Mountain West Media Days in 2017 and a Britney Spears impersonator the following year. No such frivolity now.

Boise State picks up its first-ever win over a Top 25 team, upsetting no. 8 Fresno State on the road, 35-30. A standing room only crowd of 42,881 and a national audience on ESPN watched the Broncos fall behind David Carr and the Bulldogs 28-14 early in the third quarter. But sophomore quarterback Ryan Dinwiddie brought BSU back, throwing for 297 yards and four touchdowns, the last one a 54-yarder to Jay Swillie with seven minutes left. Swillie bounced off two defenders when he made the catch and outraced them to the end zone.