Boise State’s David Moa terrorized Mountain West offenses in 2016. Now, the luck of the draw has him on the fringe of the NFL Draft this week. 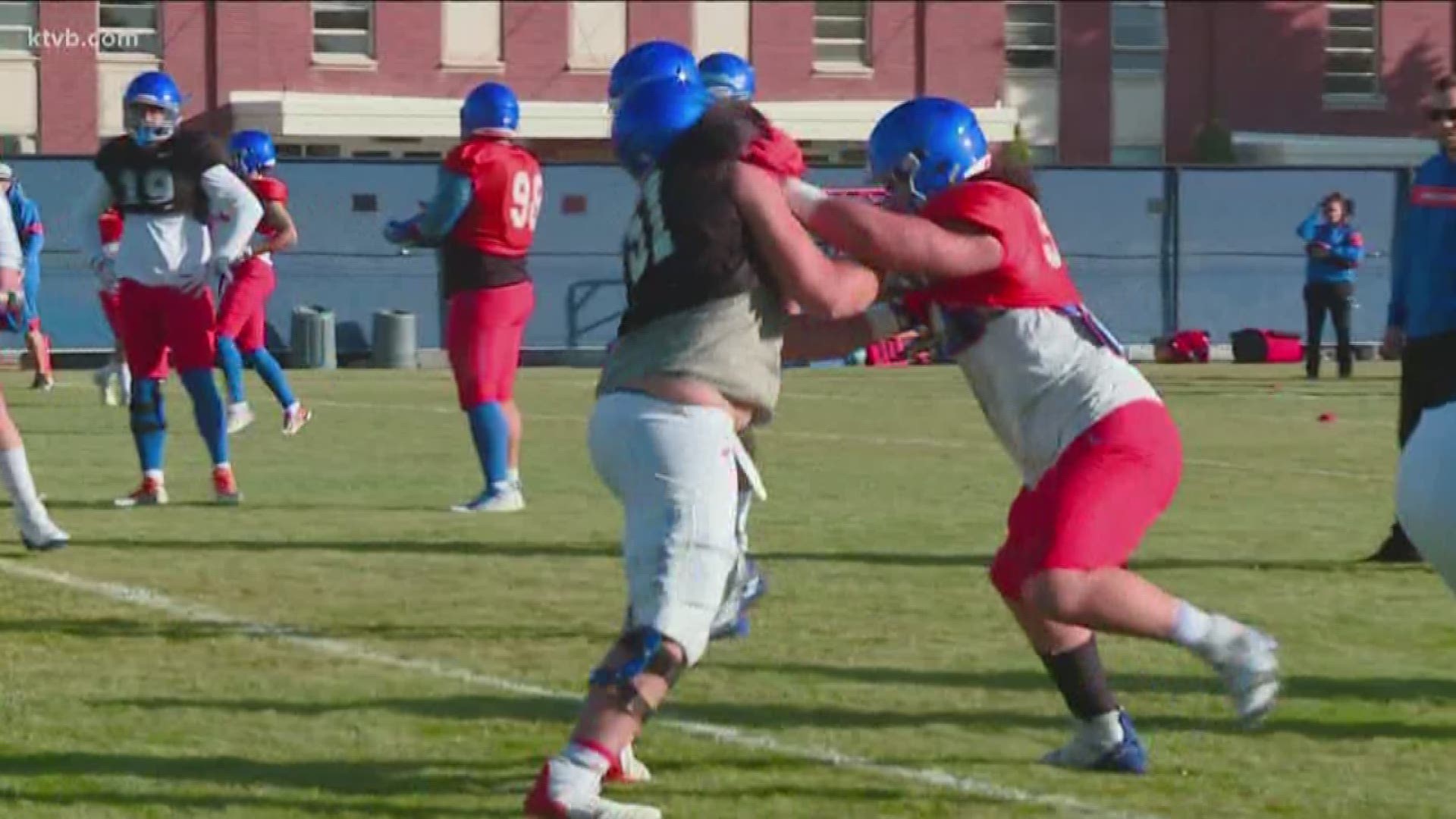 If anyone could have used the traditional pre-NFL Draft routine, it’s David Moa. The former Boise State standout is unlikely to be drafted this week, but by this Sunday night he’ll hopefully know which team will give him a free agent shot. The Broncos’ pro day was going to be huge for Moa, but now he’s left to Zoom calls and video workouts as he tries to impress NFL brass. Will teams be convinced that Moa can be the player who rocked the Mountain West with a conference-leading 8.5 sacks in 2016? He was a sophomore then, and some wondered aloud if Moa would declare early for the draft after his junior season. He recorded just two sacks in the three years following. Moa didn’t record his only sack as a second-chance senior until the regular-season finale at Colorado State (although it was a big one).

Moa’s junior year was overshadowed by a downtown arrest after a fight early in the season. He bounced back from that—especially in the leadership department—but his 2018 campaign was all but wiped out by an Achilles injury. There are NFL teams that see through the adversity, though. Moa told B.J. Rains of the Idaho Press a couple weeks ago that he’s “talked to the Rams, Titans and Chiefs.”

NO FOOTBALL – NO NOTHIN’?

Why is the NCAA considering something as strange as a football season that would last from January through April next year? Well, the Mountain West posted an 11-minute interview with commissioner Craig Thompson on Monday. If you take nothing else away from it, take this: “The matter of the fact is, if there’s no college football this fall, there’s very little likelihood there will be any other sports, because 85 percent of the revenue derived in college athletics comes from the sport of football.” Thompson was nothing if not frank. When the NCAA Tournament was eliminated last month, “each of our institutions probably lost seven figures—in excess of a million dollars,” said Thompson. However, he added, “Nobody wants to cut any sports. That’s not our intention at all.”

The Mountain West is looking at a 15-20 percent budget cut, “as is everybody,” said Thompson. Everything’s on the table in an effort to save all sports: reducing the number of competitions, reducing the number of participants, reducing non-conference events. The media right now is getting accustomed to virtual communication with coaches and athletes. The way Thompson is talking, that’ll be the fate of Mountain West Media Days this summer, normally held in Las Vegas. And, “I don’t know if it’s gonna come back,” said the commissioner. The loss to fans is the great storytelling that comes out of face-to-face conversations there. Trust me on that.

WHAT COULD HAVE BEEN

The unanimous preseason pick for last place in Mountain West baseball this spring wasn’t looking like that when the season suddenly stopped last month. Boise State is D1Baseball.com’s Most Surprising Team in the Mountain West after going 9-5 in its abbreviated debut year. The Broncos showed signs by opening with two close losses in a three-game series at nationally-ranked Texas. Then they won three consecutive series at home, including the home-opening victory over Northern Colorado in front of 3,279 fans in Memorial Stadium. Also, outfielder Michael Hicks was named the Best Senior in the Mountain West, and pitcher Wesley Harper earned the Best Freshman honor.

If Boise State coach Gary Van Tol can’t have a baseball season, he figures he can still have a recruiting season. The Broncos have signed right-handed pitcher Matt Gabbert to a National Letter of Intent, and he’ll join the program in the fall. Van Tol has always liked the Boise State football program as a blueprint, and he’s quick to point out that Gabbert was also a quarterback at Central Valley High in Spokane. On the diamond, Gabbert doubled as an infielder for the Bears. “His interest in becoming a Bronco was very clear from day one,” added Van Tol. The Broncos have had several verbal commitments in addition to Gabbert.

KTVB’s Mark Johnson got the latest on the Albertsons Boise Open Sunday night. Tournament founder Jeff Sanders said the event is still scheduled for Hillcrest Country Club August 13-16. But Sanders also said the tourney is prepared to “pivot” as the changing coronavirus landscape may dictate. Right now, the Korn Ferry Tour plans to return to competition with a new event June 11-14, albeit without fans. But with the Open Championship (British Open) already canceled this year, what kind of pressure might the PGA Tour eventually feel? The Boise Open was played in August for the first time last year. It would obviously be better off in September this season.

Unknown Rosie Ruiz is the first woman to cross the finish line at the Boston Marathon. Other runners wonder, “Who the heck is Rosie Ruiz?” and say they never saw her on the course. Neither did race officials as it turned out, and Jacqueline Gareau was declared the winner after Ruiz was disqualified. You know what else happened that day? Tony Romo was born. The former Dallas quarterback and current NFL commentator is 40 years old.