I don’t mean to keep coming back to cautionary tales when it comes to Bronco hoops. But, going into what seems a lock of a win, I’ve got another. 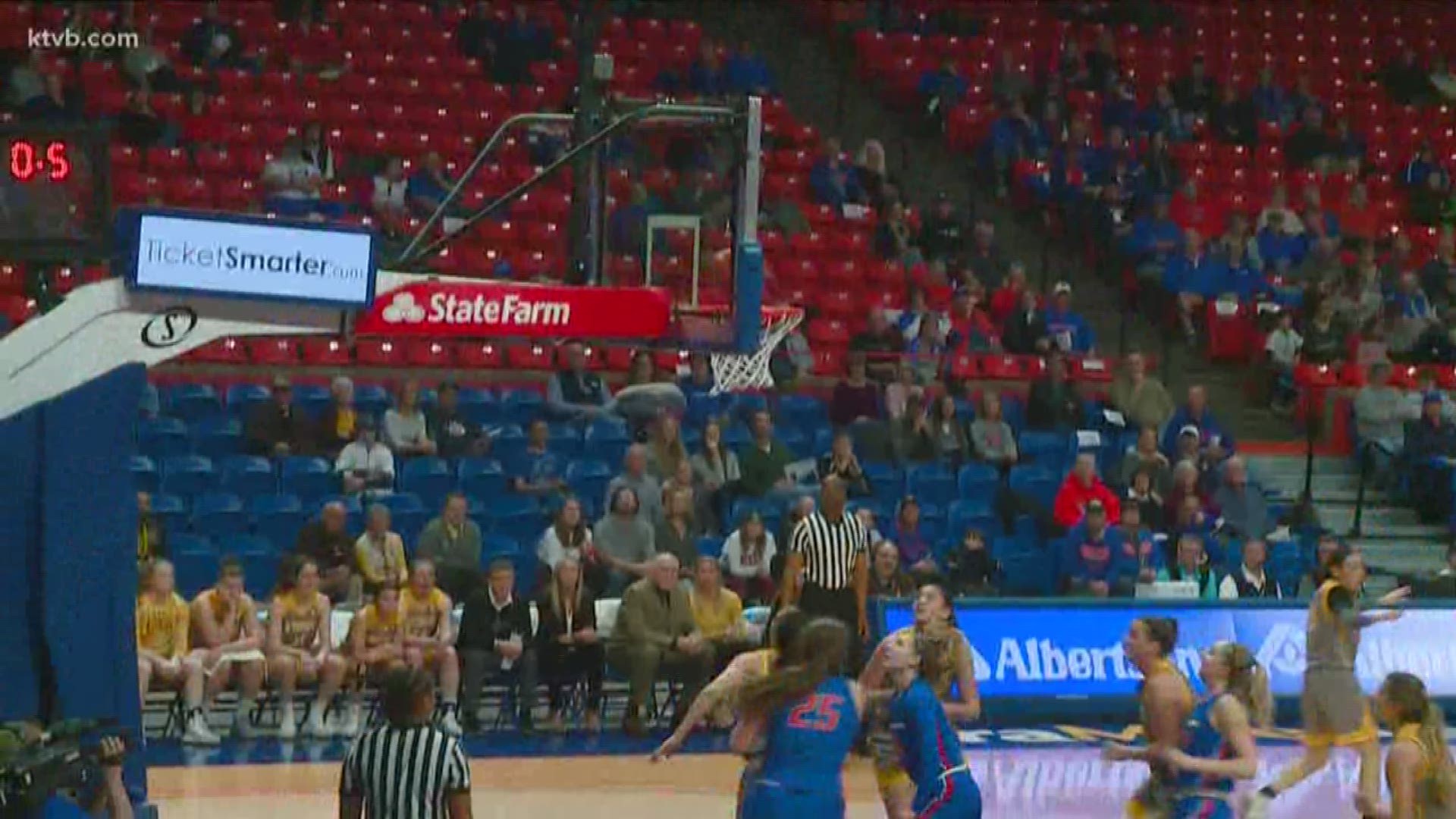 Boise State plays at San Jose State tonight.  How could this be a trap game, you scoff?  You need only go back four years, when the Broncos were a week removed from a miracle final-minute rally that beat San Diego State 66-63 in Viejas Arena.  They promptly laid a colossal egg in a 68-63 loss to the Spartans in the sleepy Event Center Arena.  Boise State consequently went into the Mountain West Tournament that year seeded third, which is a goal for them right now.  Then they lost in the first round to Colorado State and turned down a bid to the new “Vegas 16” postseason tournament.  It was a good decision in retrospect, but it did leave Anthony Drmic two points short of Boise State’s career scoring record.  The Spartans came into that game 3-14 in conference play.  They’re 3-11 now.

Yes, Boise State is heavily-favored tonight, but the Broncos have to get their shooting remedied.  They’ve been under 43 percent from the field five games in a row now.  The last time they topped it was in their first game against the Spartans, when they sizzled with 57 percent shooting.  Split the difference—50 percent would be sufficient in the South Bay.  Abu Kigab, recovering from his hip-pointer, got his first start since the SJSU game Sunday against San Diego State but still played only 17 minutes.  In parts of three games since the injury, Kigab is 4-for-18 from the field.  For example, he came in midway through the first half versus Air Force last week and dropped in two quick buckets.  But he missed his remaining eight shots, including four three-point attempts.  The Broncos need a 100 percent Kigab.

San Diego State, of course, has the No. 1 seed sewn up in the Mountain West Tournament in a couple weeks.  The race revolves around the second and third seeds, which will allow those teams to avoid the Aztecs until a potential MW championship game.  Only a complete collapse will keep Utah State out of the No. 2 spot now, which is where the Aggies sit currently.  They’re tied with Nevada, which beat New Mexico 88-74 Tuesday night.  But USU holds the tiebreaker, and the Pack still has a game left against the Aztecs.  So it’s all about No. 3.  Colorado State dropped into a tie for fourth with Boise State and UNLV after an 80-56 thumping in Las Vegas Tuesday night.  The Broncos own the tiebreaker over both CSU and Nevada and will likely get the third seed if they win out.

WHAT ROUND FOR WEAVER?

Mock drafts are coming at us fast and furious.  ESPN’s inimitable Mel Kiper Jr. released his latest first round projections on Tuesday, and Boise State’s Curtis Weaver is not there.  Nor is he on two of the three mocks at NFL.com (from Maurice Jones and Chad Reuter).  But Bucky Brooks pegs Weaver as the No. 31 overall pick, going to Kansas City.  Andy Patton of USA Today’s Seahawks Wire likes Seattle drafting Weaver, as he’ll probably be available when the Seahawks’ No. 27 overall pick rolls around.  But, as Patton notes, the ‘Hawks could wait it out.  “While some have Weaver as a late first rounder, others consider him more of a second or even third round pick, a spot that might suit (Seattle) a little better considering his rawness,” writes Patton.  Weaver’s next stop: the NFL Combine next week.

ZACH WILSON SHOULD BE SECURE IN PROVO

You can start to taste spring football now, but you wonder if this is just window dressing.  “BYU football coaches promise ‘wide-open competition’ for starting quarterback spot in spring ball,” said the Valentine’s Day headline in the Deseret News.  It’s Zach Wilson’s job, right?  But Jay Drew’s story suggests it “a three-man derby, as Wilson attempts to hold off redshirt sophomores Jaren Hall (even as the outfielder splits time between baseball and football the next few months) and Baylor Romney.”  Said passing game coordinator Aaron Roderick: “All three guys will get reps, and it is going to be a competition this spring.”  Is it just talk?  On the other hand, Romney deserves a shot after his performance in the 28-25 upset of Boise State last fall.

‘DIRTY DOZEN’ FINALLY ON THE DIAMOND

It’s finally time for Boise State baseball’s “Dirty Dozen” to get down to work.  That group consists of the original 12 players in the revived Broncos program from the fall of 2018 and spring of 2019.  Eight of them are position players, and four of those are in the starting lineup for the opener at Texas Friday, as projected by B.J. Rains of the Idaho Press.  There’s Geon Hyoung Kim, the Timberline High grad who transferred from Portland, starting in centerfield.  In leftfield is Michael Hicks of Coeur d’Alene, who also played at Portland.  Catcher Cory Meyer out of Highland High came to Boise State by way of Washington State.  And Australian Grant Kerry is slated to start in rightfield.  It should be highly emotional for the guys who have been immersed in coach Gary Van Tol’s team since Day 1.

If the Idaho Steelheads are to make a move for second place in the ECHL Mountain Division, now’s the time.  The Steelheads open a nine-game homestand tonight against Kansas City, and they need to take advantage of CenturyLink Arena ice.  Utah has won four games in a row to open up a six-point lead over the third-place Steelies in the standings (Allen continues to be the runaway leader in the division).  Idaho has won seven straight games over the Mavericks in Boise.  Statistical notes: Marc-Olivier Roy leads the Steelheads in scoring this season with 42 points, while Will Merchant is tops in goals with 17.  Merchant also leads the team with five power-play goals.

The last time the Boise State women faced San Jose State, it turned out to be the pinnacle of the Spartans’ season to date.  They broke a nine-game losing streak to the Broncos with a 74-61 decision in the Events Center.  SJSU was 9-1 in the Mountain West at that point but hasn’t won since.  For Boise State, it’s been a quiet senior season for Riley Lupfer.  Then you look at NCAA stats and see that she’s fourth in the country with 82 three-pointers.  It has not been a quiet senior campaign for Jayde Christopher, the nation’s second-leading assists artist.  The Broncos have at least four games left, and Christopher needs 33 assists total to reach the Mountain West career record of 243.

Tiger Woods holds one of the most-watched sports press conferences in television history.  Although it wasn’t really a press conference—it was a 13½-minute statement apologizing for as many as a dozen affairs revealed after a Thanksgiving night incident that had Woods leaving his Florida home and crashing his SUV down the street, with wife Elin not far behind to presumably lend assistance.  But she was angry.  A wide array of sponsors subsequently dropped him, and he went into rehabilitation for sexual addiction.  Woods would return to golf in the 2010 Masters but played a limited schedule the next two years.