RayJ Dennis a one-hit wonder? One-hit wonders aren’t put in the position to do what Dennis did last Saturday night. He’s earned the spotlight. 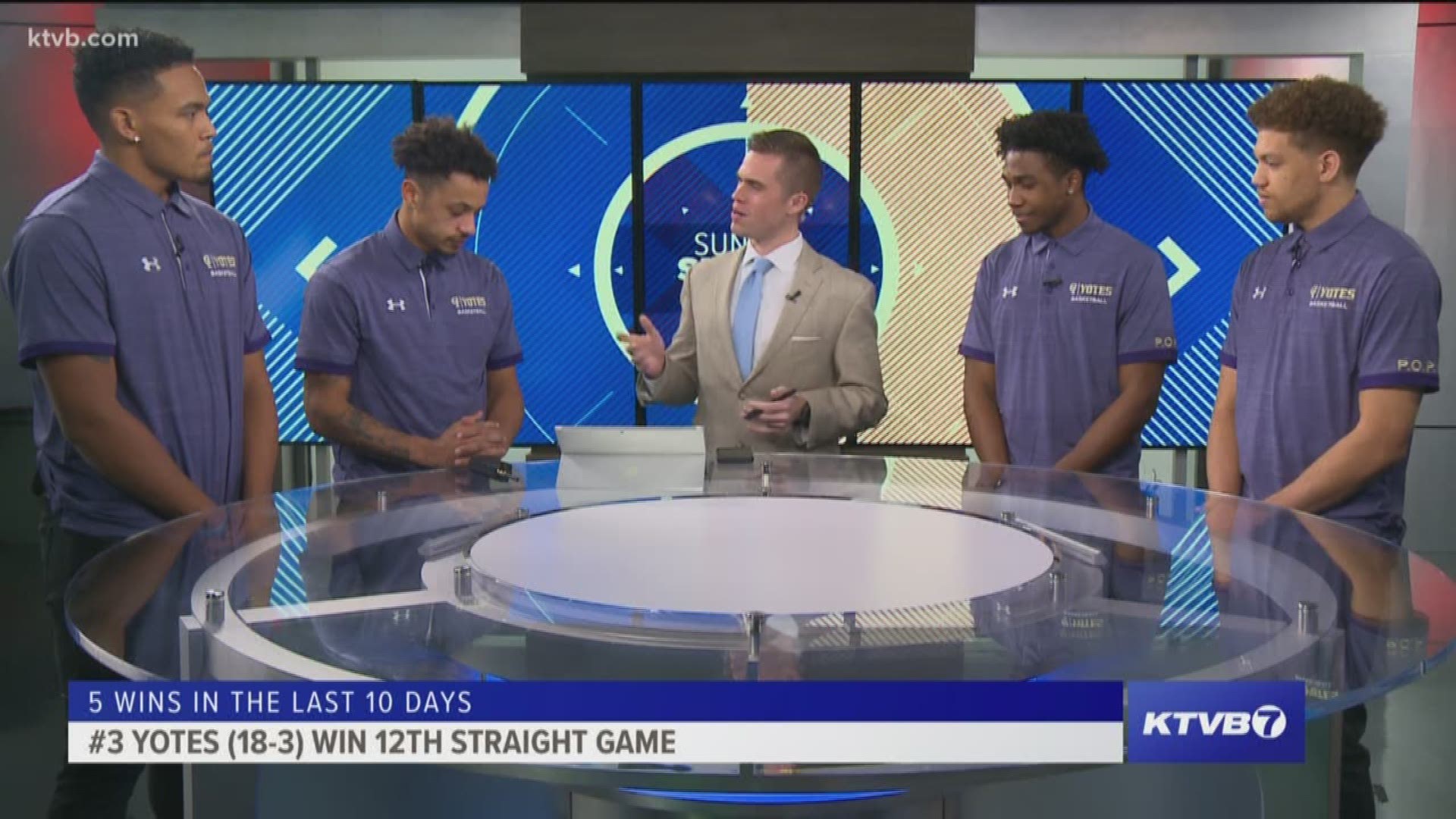 Tomorrow is the second day of the rest of RayJ Dennis’ basketball life.  The Boise State true freshman broke out last Saturday like no one else before him, scoring 19 points in the last 3½ minutes of regulation to key the Broncos’ overtime conquest of Utah State.  Fresno State had to adjust its set when watching tape of Dennis, but the Bulldogs have seen it now and will have a plan for him Saturday evening in Save Mart Center.  Dennis should be a different player moving forward now that he’s tasted success and developed confidence.  He had scored only 20 points over the previous nine games, but coach Leon Rice sensed something, having started Dennis the past four contests.

When you watch a highlights package of last Saturday night’s epic comeback and overtime victory (and there are lots of them out there), you see Justinian Jessup almost as much as you do Dennis.  It was Jessup who drove the wagon in the OT, giving Boise State its first lead of the game with a layin and free throw a minute and a half in, then drilling a clinching three-pointer with a minute remaining.  Jessup ended up with 15 points for the game and has been in double-figures in seven of the Broncos’ eight Mountain West games.  He now has 284 career three-pointers, just 16 short of the conference record held by BYU’s Jimmer Fredette.  Despite a couple of clunkers, Jessup is shooting 43.5 percent from beyond the arc in league.  He did not hit one last year at Fresno State, though.

HOW REALISTIC IS THIS AAC TALK?

Is this lawsuit—er, complaint—just smoke and mirrors, or does Boise State have options for its football program in this dispute with the Mountain West?  Dan Wolken of USA Today says yes.  Writes Wolken: “The Mountain West’s peer league, the American Athletic Conference, is watching this soap opera closely, considering whether the time is right to make a play that would significantly strengthen its brand as the best football league outside the Power Five, kneecap its rival and fill a hole in its membership that was created when UConn announced it was leaving last summer.”  Wolken says the wild card is whether the American conference would feel it needs the Broncos and would see their value as a football-only member.

WEAVER AT WORK IN JERRY WORLD

There’ll be some fun and games, literally, in the midst of serious NFL Draft prep for Curtis Weaver.  The former Boise State star has been selected for the State Farm All-Star Football Challenge at AT&T Stadium in Arlington, TX, a week from tonight on ESPN2.  Twenty-four players will be divided into six teams for a series of skills contests—five teams representing each of the Power 5 conferences and the sixth featuring four Group of 5 standouts, called the “Wild Card” team.  Weaver will be joined on that unit by former Utah State quarterback Jordan Love.  Cameras will likely be drawn to Weaver’s effervescent personality.

The Hula Bowl is kind of a throwback college all-star game, and it returns Saturday after a 12-year absence, thanks to a deal with CBS Sports Network.  The game in Honolulu includes players from the U.S., Japan and Australia.  Five are from local teams, including College of Idaho offensive tackle Josh Brown, who already has one postseason appearance under his belt.  Brown played every offensive snap for his squad in the NFLPA Collegiate Bowl last week.  He’ll be joined at Aloha Stadium by four Boise State representatives: defensive tackles David Moa and Sonatane Lui, tight end Garrett Collingham and safety Kekoa Nawahine.

A DRAG FOR DELAET

You hate to hear this, considering the ordeal Graham DeLaet’s back has put him through the past two-plus years.  But the former Boise State star had to withdraw Thursday from the Farmers Insurance Open at Torrey Pines due to, yes, back problems.  DeLaet just returned to the PGA Tour last October after missing two years due to a back injury.  He was playing the 2019-20 season on a medical exemption.  This is a sudden setback, as the former Boise State star was really looking forward to this tournament.  “My game actually feels pretty close right now, you always know,” DeLaet said on the practice green on Monday, according to the Edmonton Sun.  “Sometimes you kind of fake it and you say that, but right now it does.”

The Boise State women’s biggest Mountain West game of the season is coming Saturday against Fresno State, and it’s not hard to figure out why.  The Broncos were the preseason pick to win the Mountain West, but it’s the Bulldogs whom they’re chasing.  Fresno State is 8-0 in conference, with Boise State two games back.  This is the Broncos’ only shot at the Bulldogs this season.  Braydey Hodgins will be a key—it seems she found her offensive game again with 17 points at Utah State last Saturday.  All ghe while, Hodgins became the fourth member of her immediate family to become a 1,000-point collegiate scorer.  Her mom, the former Karen Murray, did it at Washington, and her older sisters Delaney and Hayley both reached the milestone at Eastern Washington, where they are the top two career scorers.

RANKED VS.RANKED – AND STEELIES IN THE MIDWEST

There’s very little margin for error this weekend for College of Idaho if it is to extend its 12-game winning streak.  The Coyotes are No. 3 in NAIA Division II—tonight they get No. 15 Southern Oregon at the J.A. Albertson Activities Center, followed by No. 5 Oregon Tech Saturday night.  Last weekend C of I became only the third Cascade Conference team ever to start a season 11-0 in league play.  One of the previous two was the Yotes’ 1995-96 team that went on to win the national championship under Marty Holly.  And the Idaho Steelheads, who have dropped three of their last four games, play at Kansas City tonight and tomorrow night and at Tulsa on Sunday.  The Steelheads lost 2-1 in a shootout at Utah on Martin Luther King Day.

Klay Thompson of the Golden State Warriors scores 37 points in one quarter, the most in NBA history, in a 126-101 win over the Sacramento Kings.  Thompson went off in the third quarter, going 13-for-13 from the field, 9-for-9 from beyond the arc, and 2-for-2 from the free-throw line.  The nine three-pointers were also an NBA record for one quarter.  The former Washington State Cougar finished with 52 points before leaving the game early in the fourth quarter.