Fans in ExtraMile Arena tried to will Justinian Jessup to the Mountain West career record for three-pointers Saturday. He only tied it—but the tying one was huge. 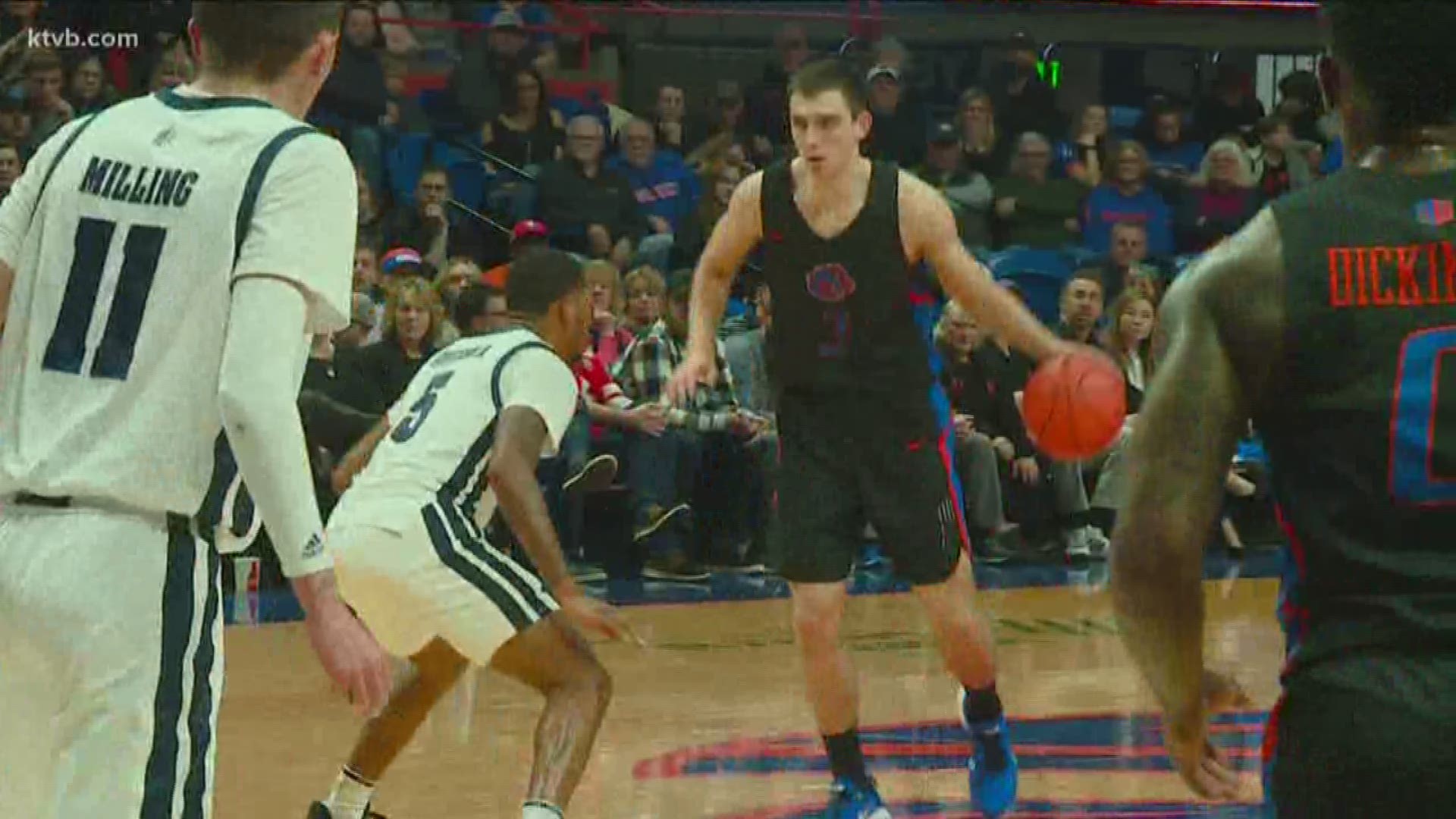 At the beginning Saturday night, it looked like Boise State was facing Fresno State or San Jose State again as it vaulted to a 22-point first-half lead.  Then it was apparent the Broncos were dealing with Nevada, still a talented bunch that’s accustomed to winning.  Jalen Harris, the Mountain West’s leading scorer in conference games, started going off, and the Wolf Pack got the Boise State lead down to three with 11 minutes remaining in the game.  After the Broncos built the advantage back to 12 points, the Pack pared it to four with 4½ minutes left.  That’s when Justinian Jessup hit the long-anticipated three-pointer that tied Jimmer Fredette’s Mountain West career record, leading to a crucial 73-64 win.  Don’t look now, but Boise State is now in second place in the conference.

The Justinian Jessup subplot was interesting Saturday night.  Boise State’s senior star made his first basket just 20 seconds into the game, but it went for two points.  Jessup drained his first three-pointer a minute later.  Then there was a false alarm about seven minutes in when Jessup hit another three that appeared to tie the record, but he was called for a travel.  He missed his next five tries from beyond the arc to the pained choruses of “Ohhhhhh…” from the crowd.  Then he hit the magical trey with 4:20 left, and that keyed the victory.  Jessup scored 17 points on the night, while Derrick Alston led the Broncos with 24, with 11 of them from the free-throw line.  Harris kept Nevada within shouting distance, pouring in 30 points, 25 of them after halftime.

It was understandable that some would find the hiring of former linebacker Winston Venable as Boise State running backs coach unusual on Saturday.  Perhaps they’ve thought this through since then.  Venable will bring a defensive perspective to the position.  That was tweeted by former Broncos wide receiver Shane Williams-Rhodes.  But oh, the intangibles.  Venable was as high-energy as it got as a player.  And with the running backs, he’ll command the room.  He’ll also be an elite recruiter.  This line of work runs in the Venable family.  Winston’s dad, Max, played 12 seasons in the majors and has been a big league instructor since.  Winston’s brother, Will, is currently third base coach for the Chicago Cubs after a nine-year big league career spent mostly with the San Diego Padres.

RELATED: Boise State basketball: Nevada and all that Jazz

Two plays stand out to me in Venable’s Boise State career.  You can still visualize them if you saw them.  The first was at Fresno State in 2009, and it wasn’t his 30-yard pick-six that launched the Broncos’ 51-34 victory.  It was  when Venable vaulted a Bulldogs running back in pass protection to hit quarterback Ryan Colburn as he threw and forced an incompletion.  The second was the interception of TCU QB Andy Dalton at the end of the 2010 Fiesta Bowl, capping Boise State’s 14-0 season.

Curtis Weaver had a nice Friday.  The former Boise State star and Mountain West career sacks leader won the Strength Challenge at the State Farm All-Star Football Challenge at AT&T Stadium on ESPN2.  And Weaver got props in a profile by Todd McShay, who still thinks he’s a first-round NFL Draft pick.  “When you look at his game, it’s built for the NFL,” said McShay.  “It’s not just the speed, it’s not that long, angular guy.  It’s power and quickness and relentlessness, and that’s what I love about Curtis Weaver.”

RELATED: Boise State basketball: It ended up being a layup

As Kansas City’s pass game analyst and assistant quarterbacks coach, Bishop Kelly grad Joe Bleymaier had to feel an indelible part of it.  After a six-minute offensive masterpiece at the end of the game last night, the Chiefs found themselves 31-20 winners over San Francisco, claiming their first Super Bowl title in 50 years.  As we said last week, working with Patrick Mahomes has to be fun.  Bleymaier will now be fitted for a gigantic ring.  For you in the Twitter-verse, I wonder where in, uh, Kansas that Bleymaier lives.

The Idaho Steelheads won once and lost once over the weekend against a team that has become a nemesis this season.  In each case, the Steelheads fell behind the Rush 2-0.  They weren’t able to overcome it Saturday night in a 2-1 loss.  But Idaho staged a raucous rally Friday night, capped by a Brett Supinski goal 2½ minutes into overtime for a 3-2 victory.  The Steelheads put the clamps on defensively after falling into the two-goal hole.  Rapid City managed only 12 shots on goal combined in the second and third periods and zero in the OT.  That paved the way for goalie Tomas Sholl’s 19th win of the season.

Braydey Hodgins played like the Mountain West Preseason Player of the Year Saturday, and the Boise State women played like the conference favorites in an 83-72 win at Nevada.  The Broncos rallied from a three-point halftime deficit with Hodgins launching an 18-4 third-quarter run with a layup, two of her season-high 25 points.  A’Shanti Coleman was money in the second half, scoring 19 of her career-high 22 points on 9-for-9 shooting.  Coleman also pulled down nine rebounds.  Boise State shot just 10 percent from three-point range, but 59 percent from inside the arc.—an atypical box score, but the Broncos and coach Gordy Presnell will take it.

College of Idaho and Northwest Nazarene rock on.  With victories at Multnomah (84-74) and Warner Pacific (87-66) over the weekend, the Coyotes have now won 16 games in a row, their longest streak in 65 years.  The Yotes had a tricky task versus Multnomah.  The Lions came into the game leading the NAIA in scoring at 98 points per game and busted out to a 14-point first-half lead before C of I got a handle on them.  NNU is on a roll, too.  The Nighthawks’ 81-77 triumph over Simon Fraser Saturday night was their seventh straight, the longest streak in 12 years.

RELATED: Boise State basketball: On all cylinders at Save Mart

After going 0-18 all-time in Logan, Utah, Boise State gets its first-ever road victory over Utah State.  The Broncos led by five points at the break despite star guard Derrick Marks, the Mountain West’s leading scorer, having to spend the final 14 minutes of the first half on the bench with foul trouble.  Marks came back in and scored 17 of his 23 points in the second half, including a stunning 35-foot three-pointer that turned the game in a 68-63 Boise State victory.  It was the Broncos’ last matchup against legendary Utah State coach Stew Morrill, who retired at the end of the season.