The Boise State women’s basketball team was 14-7 after a devastating January loss to Fresno State. The Broncos are now 24-9—and dancin’. 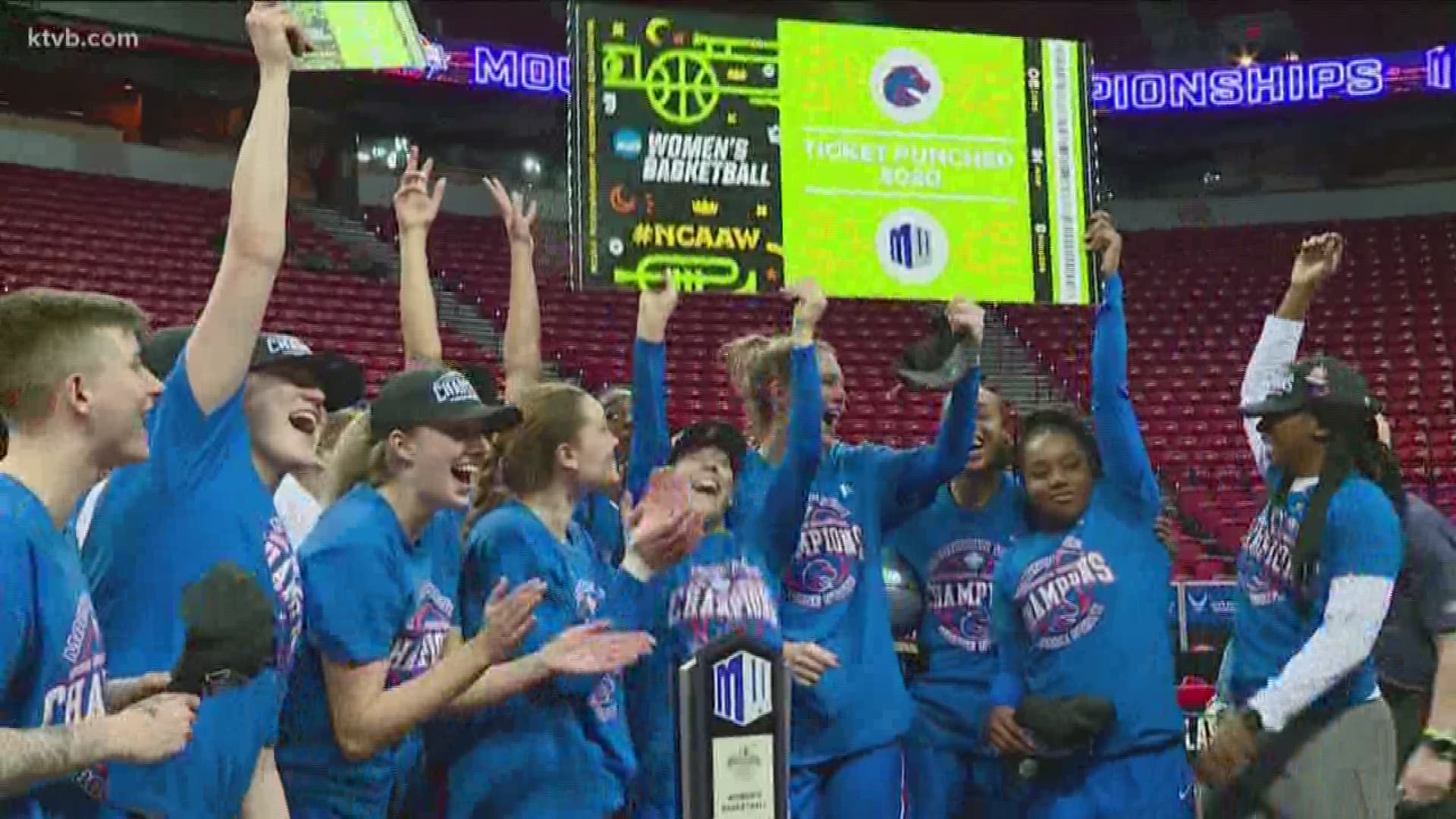 Since January 25, the Boise State women have been consumed by the goal of one more shot at Fresno State—hopefully in the Mountain West Tournament championship game.  The Broncos got it, and they didn’t squander it, beating the Bulldogs 80-76 in overtime Wednesday night to claim their unprecedented fourth consecutive title.  Boise State fended off some dreaded déjà vu.  Fresno State had rallied from a 17-point deficit to win in January at ExtraMile Arena.  This time the Broncos let a nine-point lead get away in the fourth quarter but drilled things down in OT.  Boise State thus becomes the first team in the country to punch its ticket to the 2020 NCAA Tournament.

There was a passing of the torch of sorts in Las Vegas.  Boise State senior standout A’Shanti Coleman fouled out of the game with 1:16 left in regulation.  Sophomore Jade Loville had already started her game-changing stretch, and she finished it in overtime.  Loville ended with 20 points, the most by a player off the bench in tournament history, and scored five of Boise State’s nine in overtime.  Loville was a gamer when the Broncos need it most, and she’ll be a focal point on this team next season.  This year?  It was Coleman, the tournament MVP after averaging 19.7 points and eight rebounds in three victories while shooting 59 percent from the field.

DAY OF RECKONING IS HERE

Bubbling under the surface at the Mountain West Tournament this afternoon is the issue of a 20-win season.  If the Boise State men don’t get past UNLV today, how do we characterize the 2019-20 campaign?  It would have to be disappointing not to reach 20 wins with the talent the Broncos have.  And the game against the Rebels appears to be Boise State’s last chance, as the NIT is not going to take a 19-12 team with a first-round conference tournament exit, and the “alphabet soup” tournaments have long been irrelevant to Division I teams at the high mid-major level and above.  The Broncos have not made it past the quarterfinals of the Mountain West Tournament since 2015, the year they won the Mountain West regular-season championship.  Today is fairly big.

How much can two teams change in a week’s time?  Boise State plays a second straight game against UNLV after the first one didn’t go so well.  There was no quit in the Broncos, as they whittled a 27-point deficit down to seven in the final minute last Wednesday at the Thomas & Mack Center, eventually losing 76-66.  But the fact that it got to 27 in the first place was very concerning.  Boise State couldn’t hit the ocean for the first 30 minutes of the game, and it went through a long stretch playing matador defense (uncharacteristically).  A lot needs to be corrected.  Hint: Derrick Alston scored 26 points in the first meeting between the Broncos and Rebels in early January at ExtraMile Arena.  Boise State won that game 73-66.

Remember when Boise State had to play Dayton on its home floor in the First Four of the 2015 NCAA Tournament?  This is the next best thing.  College of Idaho is the No. 1 overall seed next week at the NAIA Division II Championship in Sioux Falls, SD.  And in the first round next Wednesday, the Coyotes get to play Northwestern of Iowa.  Not only are the Red Raiders not terribly far from Sioux Falls, they’re the tournament host.  Some reward for a 30-3 team.  Oh well.  The Yotes head back there with the Cascade Conference Defensive Player of the Year, as Centennial High grad Talon Pinckney became just the third player ever to earn the honor in back-to-back seasons.  C of I’s Colby Blaine was named CCC Coach of the Year, while Rocky Mountain grad Nate Bruneel joined Pinckney as a first-team all-conference pick.

Spring football means wholesale changes on the Boise State offensive line.  It’s necessary, of course, with Ezra Cleveland, John Molchon, Garrett Larson and Eric Quevedo all departed.  The one starter remaining, Boise High grad John Ojukwu, would seem like a natural to move over to Cleveland’s old left tackle spot to anchor the unit.  There are four returnees who are early candidates to step in: Jake Stetz, Kekaniokoa Holomalia-Gonzalez, Donte Harrington and Garrett Curran.  All four have at least a little experience.  The most vivid memory of Stetz is from the Florida State game.  When Ojukwu went out with an injury in Tallahassee, the Broncos moved Molchon over to right tackle and inserted Stetz and left guard.  The Broncos didn’t miss a beat as the Broncos ran their way to a 36-31 victory.

Idaho Steelheads goalie Colton Point nabbed his first career shutout last Saturday.  It was Tomas Sholl’s turn Wednesday night, and he recorded his fifth shutout of the season in the Steelheads’ 4-0 blanking of South Carolina.  Interestingly enough, Sholl has started three games in his career against the Stingrays and has shutouts in all three.  This came after he had landed ECHL Goaltender of the Month honors earlier in the day.  Sholl was 7-1 in February with a 1.74 goals-against average.  It’s his second monthly honor this season and his third overall.  By the way, the Wednesday night win was the Steelies’ seventh in a row.

MERRITT’S IN – DELAET’S STILL OUT

Troy Merritt hasn’t played a PGA Tour event in three weeks, but he’ll be back on the course today for the Arnold Palmer Invitational at Bayhill outside Orlando.  Merritt missed the cut at the Genesis Invitational February 14, but he had his best finish of the season the previous week with a tie for 25th at the AT&T Pebble Beach Pro-Am.  The Meridian resident and former Boise State star is currently 162nd in the FedExCup standings.  Graham DeLaet is not in the field—he hasn’t played since back problems forced him to withdraw from the Farmers Insurance Open at Torrey Pines in January.

A STAMPEDE REMNANT OR TWO

Believe it or not, it’s been four years now since the Idaho Stampede played in Boise as part of what is now the G-League.  There are still some former Stamps in the NBA, including Anthony Tolliver, the much-traveled veteran.  Tolliver is on the move again, signing with the Memphis Grizzlies.  He played for the Stampede 10 seasons ago, averaging 21.4 points and 11.4 rebounds in 14 games before an NBA callup.  Tolliver has now played in more than 700 NBA games.  The Grizzlies are the 12th NBA team he’s played for.  Elsewhere, former Stampede and Boise State star Coby Karl is the G-League Coach of the Month for February after leading the South Bay Lakers to a 7-2 record.  It’s the second such honor of Karl’s coaching career.

Unsigned as a free agent—and missing spring training for the first time in his career—Gaylord Perry is signed by the Seattle Mariners.  The 43-year-old righthander was dubbed the “Ancient Mariner,” and in May of that year he’d become the first pitcher in 19 years to win 300 big league games.  Later in the season, Perry was ejected from a game for doctoring a baseball, the only time that ever happened to him despite a decade’s worth of allegations.  He’d pitch 1½ seasons with the M’s and would finish his career in 1983 with the Kansas City Royals.