Forty years of waiting ended with a flourish for the revived Boise State baseball program over the weekend. It’s sinking in now. 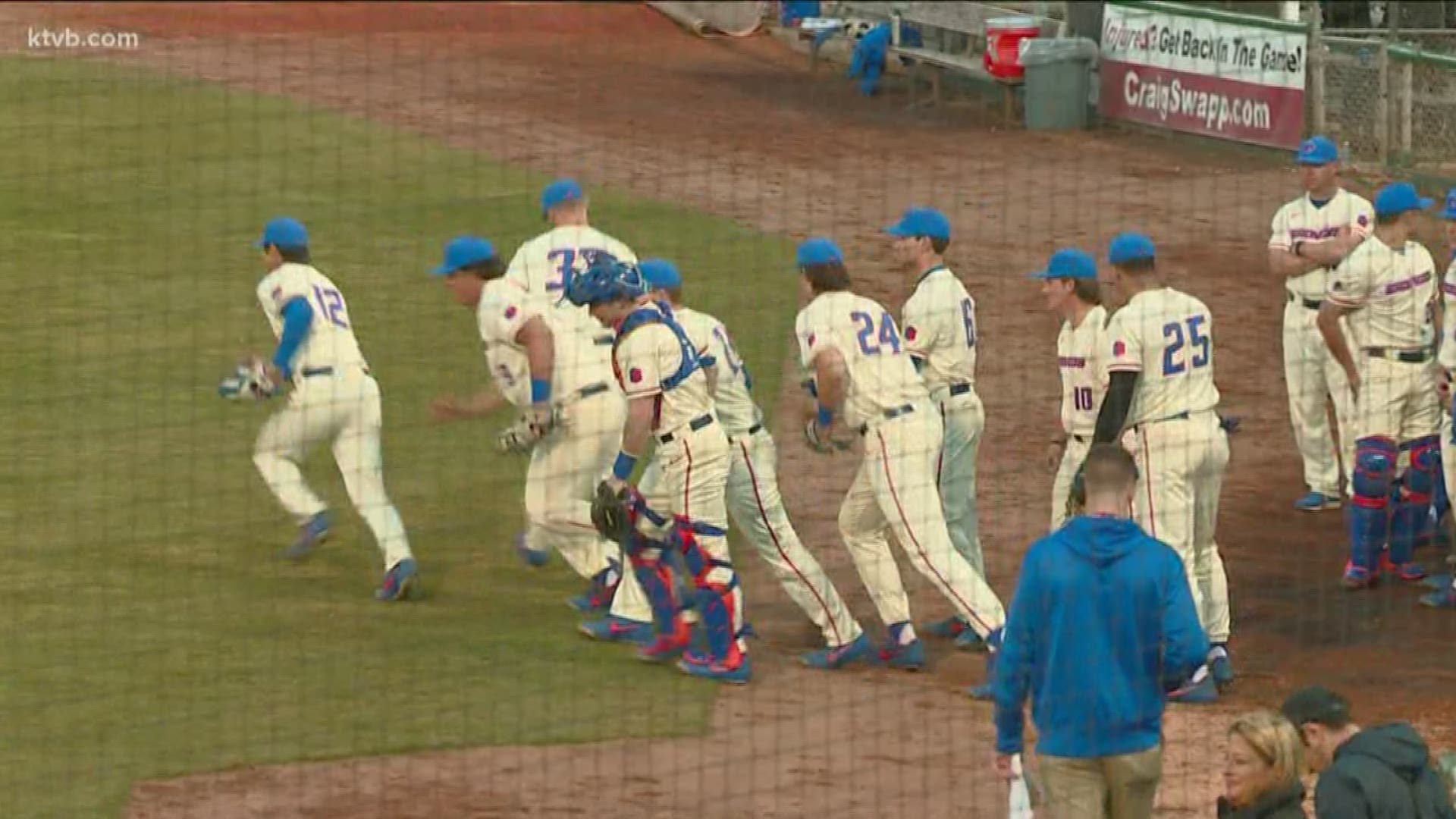 When Boise State baseball played at Texas a week ago, it was kind of an out-of-body experience.  The Broncos were swept, as expected, but they played well.  Who were those guys?  Now it’s believable.  Boise State, in its first home series in 40 years, took all four games over the weekend from Northern Colorado at Memorial Stadium.  It was a good-lookin’ sweep.  The opener Friday night, a 4-0 win before 3,279 fans, was magical.  Then the Broncos captured both ends of Saturday’s doubleheader, 5-4 in 10 innings and 12-9, as the pitching staff combined for 27 strikeouts.  On Sunday, three Boise State hurlers combined on a one-hitter in an 8-2 win.  Regardless of what else happens in Year 1 of the new program, those four victories are huge.

Observations on the Friday night debut: it looked like a scene from “Field of Dreams” the way cars were backed up all the way down Glenwood waiting to get into the Memorial Stadium parking lot.  It certainly felt different inside.  There was no beer, fans were wearing coats, and there were no leaves on the cottonwood trees beyond the outfield fence.  But that only added to the atmosphere.  It took a while for the first “Boise…State…” chant.  Maybe fans wondered if it was appropriate at a baseball game.  It was, and it finally came in the bottom of the sixth inning.  On that very pitch, Cole Posey hit the blooper that scored two runs and gave the Broncos a 4-0 lead.

RELATED: Boise State football: Every schedule has its quirks

UNLV IT IS FOR THE BRONCOS

Nothing crazy happened on the last Saturday of the Mountain West men’s basketball regular season.  Utah State’s upset loss at New Mexico didn’t affect anything, so Boise State is left with the No. 5 seed in the Mountain West Tournament and will play No. 4 seed UNLV Thursday afternoon in the Rebels’ home building.  That does not bode well for the Broncos, who were almost run out of the Thomas & Mack Center last Wednesday before falling 76-66.  UNLV is playing the best hoops in the conference right now and is coming off a 92-69 romp over San Jose State.  The winner of the Broncos-Rebels game faces San Diego State this Friday night, assuming the Aztecs put away the winner of Wednesday’s Fresno State-Air Force play-in game.

Derrick Alston is probably going to be that rare player who goes from walk-on to NBA Draft pick, but will that happen this June, or in June of 2021?  Even without blue-and-orange glasses on, Alston looks like a guy who could really benefit from one more year at Boise State.  He still has only 188 pounds on his 6-9 frame, and his junior year Mountain West numbers have actually been down from last year.  Alston is averaging 14.9 points versus 16.0 in conference play last season.  His rebounds are up, but unfortunately so are his turnovers.  Alston is turning the ball over 3.6 times per game in the MW against just 1.4 a year ago.

Alston’s No. 92 on ESPN’s list of top 100 draft-eligible players and is projected as a deep second-round pick in the draft right now.  That’s pretty good for a guy who averaged 0.6 points per game just two seasons ago.  Alston is still an exciting, indispensable part of the Boise State roster, but he’s not taking over games the way he did last winter.  Kinda hoping he stays rather than declare early for the NBA Draft.  It’s not time for him…yet.

The first-round bye has gone by, and second-seeded Boise State opens play in the women’s Mountain West Tournament tonight against Air Force (the Falcons beat Colorado State 60-48 in their Sunday play-in game).  The Broncos are 19-1 all-time against Air Force.  That’s the knock-on-wood stat for them.  Boise State goes into the tourney with honors, as Riley Lupfer and Jayde Christopher have been named first-team All-Mountain West.  Lupfer is the first Bronco to be a three-time first-team all-conference pick in 24 years.  Christopher was also named to the league’s All-Defensive Team.

STOCK UP IN INDY

Among the four Boise State representatives at the NFL Combine in Indianapolis, there wasn’t a bigger winner than the Broncos’ four-year starter at left tackle, Ezra Cleveland.  After putting up 30 reps in the bench press, tops among offensive tackles at the Combine, Cleveland peeled off a 4.94-second clocking in the 40-yard dash.  That’s big for an O-lineman.  He also won the 20-yard shuttle and three-cone drills for the entire OL group.  “One of the best Combine performances of any offensive tackle of the past 34 years,” tweeted one Combine observer.  Ian Rappaport, NFL insider at NFL.com, echoed that sentiment, tweeting, “One of the top left tackles, who had the most bench reps for tackles, now runs the fastest 40 (so far). Rising...”

Any organization strives to be playing its best hockey at playoff time.  For the Idaho Steelheads, the postseason can’t get here fast enough.  The Steelheads have now won six in a row and eight straight at home after a three-game sweep of Utah in CenturyLink Arena.  The run continued with a 2-1 overtime win Friday night and a 4-0 blanking Saturday night.  The Friday triumph finished with a goal by Marc-Olivier Roy a minute into the OT.  On Saturday, goaltender Colton Point earned the first shutout of his professional career, turning away all 25 of the Grizzlies’ shots on goal.  The Steelies are now just a point behind second-place Utah in the ECHL Mountain Division.

ONE CASCADE CHALLENGE LEFT FOR C OF I

College of Idaho stifled high-scoring Eastern Oregon again 84-57 Saturday night, and now it’s on to the Cascade Conference championship game Tuesday night in the J.A. Albertson Activities Center.  The Mountaineers’ lowest-scoring game of the season had been 58 points versus the Coyotes in mid-January.  Now it’s 57.  The Yotes will face Oregon Tech in the title tilt—remembering that it was the Owls who knocked them out of last year’s NAIA Division II Championships with a Final Four win.  Not to forget that C of I has now won 23 games in a row.  Elsewhere, Northwest Nazarene lost a 70-66 heartbreaker Saturday night in the final game of the regular season.  The Nighthawks are the No. 4 seed in the GNAC Tournament.

Boise State sells out Taco Bell Arena for its first “black-out,” and the Broncos respond in their black uniforms with a crucial 78-65 win over Colorado State, their 20th victory of the season.  The game featured one of the great scoring performances in Boise State history, as sophomore guard Derrick Marks put up a staggering 33 points in the second half and 38 for the night.  The win over the Rams, who were No. 17 in RPI ratings going into the game, boosted the Broncos’ hopes of a first-ever at-large berth in the NCAA Tournament.