There are very few givens in the NFL Draft. Sudden trades can blow up those draft boards. But here are some teams to track for two former Boise State stars. 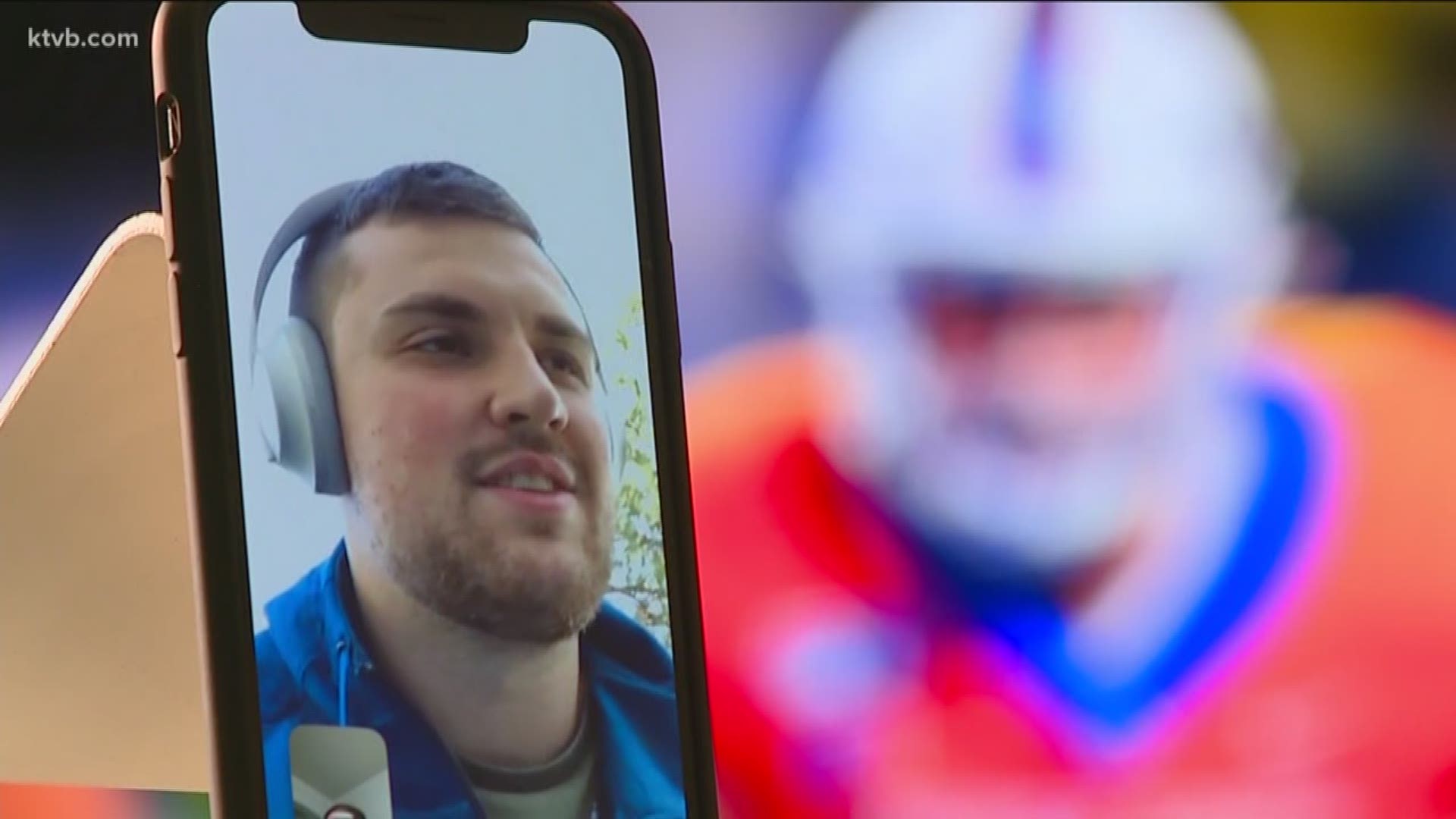 For Ezra Cleveland, it might be tonight, and it might not be.  Curtis Weaver fervently hopes it will be Friday.  But both former Boise State stars are poised to be taken in the NFL Draft.  They have the same agent, Ron Slavin, and he gave us teams to watch for each of them the other day on Idaho SportsTalk.  Slavin says the most active teams in Cleveland’s corner have been the Browns, Dolphins, Jaguars, Vikings and Seahawks.  (How does Cleveland in Cleveland sound?)  For Weaver, Slavin says the best conversations have been with the Lions, Rams, Bears and Browns.  NFL.com gives Cleveland a 6.29 grade, which means “good backup who might become starter.”  That’s not first-round level.  Weaver’s grade is 5.99—a 6.0 mark means a “developmental traits-based prospect.”  Glad I cleared that up for you.

JUNIORS TO MAKE THE JUMP

Both Cleveland and Weaver have forgone their senior years for the NFL Draft.  Boise State is the only Group of 5 school to have an early entrant taken in each of the last six drafts.  Can you name the six guys?  There was DeMarcus Lawrence in 2014, Jay Ajayi in 2015, Kamalei Correa in 2016, Jeremy McNichols in 2017, Leighton Vander Esch in 2018, and Alexander Mattison last year.  All were chosen in the third round or higher except for Ajayi and McNichols (both fifth-rounders).  The first two Broncos to be early entrants in the draft both did it in 2008.  Ryan Clady was a no-brainer, while Orlando Scandrick was a mild surprise.  But both ended up with solid NFL careers.

RELATED: Former Boise State QB Jaylon Henderson hopes for a shot at the next level

THE BEST OF THE MOUNTAIN WEST

Quarterback Jordan Love is a shoo-in as the top pick out of the Mountain West, set to go in the first round tonight.  But we haven’t really scoped out the rest of the conference.  AJ Schulte of ProFootballNetwork.com calls this “the best Mountain West NFL Draft class in years.”  Even better than 2018, when Boise State’s Leighton Vander Esch, Wyoming’s Josh Allen and San Diego State’s Rashaad Penny all went in the first round.  In addition to Love, Cleveland and Weaver, Schulte tabs Cowboys linebacker Logan Wilson and Fresno State offensive guard Netani Mute as “top-end talents.”  Broncos wide receiver John Hightower and Hawaii QB Cole McDonald are among Schulte’s “mid-round targets.”  He sees as many as 17 Mountain West players being taken over the next three days.

Darius-James Peterson, College of Idaho’s record-destroying quarterback, won’t go in tonight’s draft, and he knows it.  But Peterson is positioning himself for the future, having already signed with the Montreal Alouettes of the CFL.  DJP had an individual pro day in the Treasure Valley several weeks ago and ran 4.44 seconds in the 40-yard dash.  He also put up an amazing 39½-inch vertical leap.  Hey, Doug Flutie parlayed CFL stardom into am NFL gig.  Flutie was 5-10—Peterson is 5-9.  A Yote to watch at the end of the draft Saturday is offensive tackle Josh Brown, a 6-6, 306-pound consensus NAIA All-American in 2019.  Scouts have seen what Brown can do.  He played in two all-star games, the NFLPA Collegiate Bowl and the Hula Bowl.

Boise State was ahead of the curve with furloughs.  Unfortunately, Fresno State is out ahead of it with this.  Declining revenues due to the coronavirus have socked athletics departments everywhere, and Fresno State president Joseph Castro told the Fresno Bee Tuesday he’s open to the possibility of having to eliminate sports down the line.  The Bulldogs were cash-strapped to begin with, but they restored wrestling and added women’s water polo in 2015.  Fresno State sponsors 21 sports programs, among the most in the Mountain West.  Boise State, incidentally, has 18.

A CHANCE AT A PRESTIGIOUS PODIUM

It goes unnoticed most of the time, but the audio-visual crew in the Boise State athletics department is at the top of the skills ladder.  You see it in social media, at BroncoSports.com and sometimes on TV.  Now “Inside Bronco Football,” produced entirely by Boise State staffers, including one graduate assistant and two undergraduate students, has been nominated for a 2020 Northwest Emmy Award.  The category is Sports Program – Post-Produced or Edited.  The episode is from Week 11 of the football season, leading into Senior Night against New Mexico.  The honor of being nominated is magnified by the fact that the other three contenders are all from Seattle, with two shows on the Seahawks and one on the Sounders.  Regional Emmy winners will be announced June 6.

San Antonio Spurs center David Robinson becomes the fourth player in NBA history (after Wilt Chamberlain, Elgin Baylor and David Thompson) to score 70 points in a game as he goes for 71 in a win over the Clippers at the L.A. Sports Arena.  The explosion enabled “The Admiral” to pass Shaquille O’Neal on the final day of the regular season for the NBA scoring title, breaking a seven-year run by the temporarily-retired Michael Jordan.