'We're one voice': students organizing March for Our Lives and school walkout

A week after a gunman killed 17 people at a Florida high school, students across the country are springing into action. Come March 24, people will be "marching for their lives" everywhere in the United States, including in Boise. 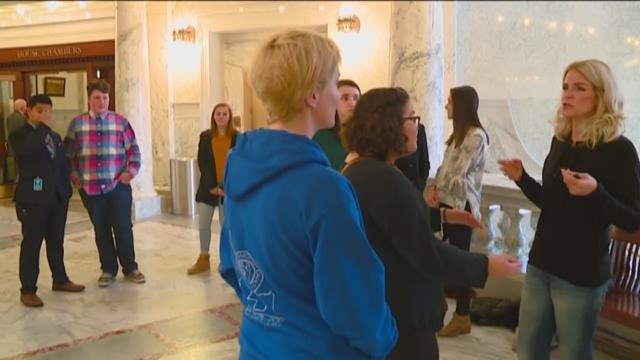 BOISE -- "Not one more." Not one more child shot in school, not one more needless death: the words that define a movement.

A week after a gunman killed 17 people at a Florida high school, students across the country are springing into action. Come March 24, people will be "marching for their lives" everywhere in the United States, including in Boise.

Survivors of the Parkland, Fla., massacre are organizing the national march in Washington, D.C., while students and supporters in other cities are marching in solidarity on the same day. In Boise, the rally will be at the Capitol, a place where they feel they can make a stand and get their message across.

"We want our voices heard, we want them to see we're not going to stop until something happens, until we see action," Rocky Mountain High School junior Anahii Jimenez said.

"I want to feel safe in school," Jimenez added.

Idaho kids, their families and supporters will take to the Statehouse steps on March 24 at 10 a.m. and demand their lives and safety become a priority as the national march hits the streets in America's capital.

"It feels like we haven't had a voice," Ridgevue High School senior Dillon Rice told KTVB. "It's not an issue that's going to stop so we have to bring awareness to it because I guess even the deaths of 17 [people] isn't enough at this point."

The sister marches sparking across the country are inspired by survivors of the February 14 Marjory Stoneman Douglas High School shooting, who are organizing the D.C. rally.

"They're leading all of us teenagers all of us kids. But I mean, we're kids with big voices," Jimenez said.

"The argument of 'but they're kids' it doesn't work anymore. Because those victims, they were kids," Rice added.

Local voices and organizers behind the Boise march want to bring awareness to gun control.

"If we don't do this now when are we going to do it, who is gonna do it?" Jimenez said. "Right now gun control - in my view - it's not political. Right now it's not whether you're Democrat, liberal, conservative. That doesn't matter right now. It's our children's lives, it is our future children's lives."

Ten days before the march, exactly one month after the Parkland shooting, a school walkout is planned.

"I'm hearing that a lot of kids are going to walk out. Half of them are probably going to walk out just to walk out and half of them have done some research. And I know teachers are talking to the kids about it: hey, let's go over history, let's go over what the reasons are," Meridian Police officer and Mountain View High School resource officer (SRO) David Gomez said. "The teachers they're going to have an interruption in class which is not my favorite. We're happy that kids are taking part in their world but on the second hand they are gong to disrupt every classroom."

As soon as the clock strikes 10 a.m. students across the country, including here in the Treasure Valley, will be walking out for 17 minutes in recognition of the 17 lives lost too soon.

"They want to start a dialogue and this is a way to bring attention to that dialogue that they want to start. Turn it into something really productive. We're going to take a tragedy and let's turn it into something productive that can bring the whole community together," Meridian Police Deputy Chief Tracy Basterrechea told KTVB, "Obviously there's going to be differing opinions on what the solutions are but we have to listen to everybody and one another to make this work."

"We take attendance because we're required to take attendance. If I was going to give kids advice and they decide they want to participate I'd talk to my parents and say call in and tell them that I'm going to participate in this walkout because that way it's an excused absence, not an unexcused absence," West Ada School District spokesman Eric Exline said. "We expect kids to be at school. If they want to do something based on their own conscience, their own beliefs that's what they can do but we'll just keep running school as normal that day."

Officer Gomez and Meridian police say they want to make sure students are safe, aware of their surroundings and don't cause any damage or destruction in the community during the walkout.

"Kids can really come together in a united voice and work toward solutions that quite frankly adults haven't been able to come to in 20 years. So maybe this is the impetus that makes some of the adults grow up and have those conversations and compromises with one another," Basterrechea said.

Gomez says this is prompting kids to educate themselves and figure out how they can make a difference.

"Whatever your kid believes, talk with them," he added. "It's a good opportunity to have a family chat with your kids."

Learn more about March For Our Lives here.