A family friend said the boys, John and Shawn, were found in a cabinet holding one another. 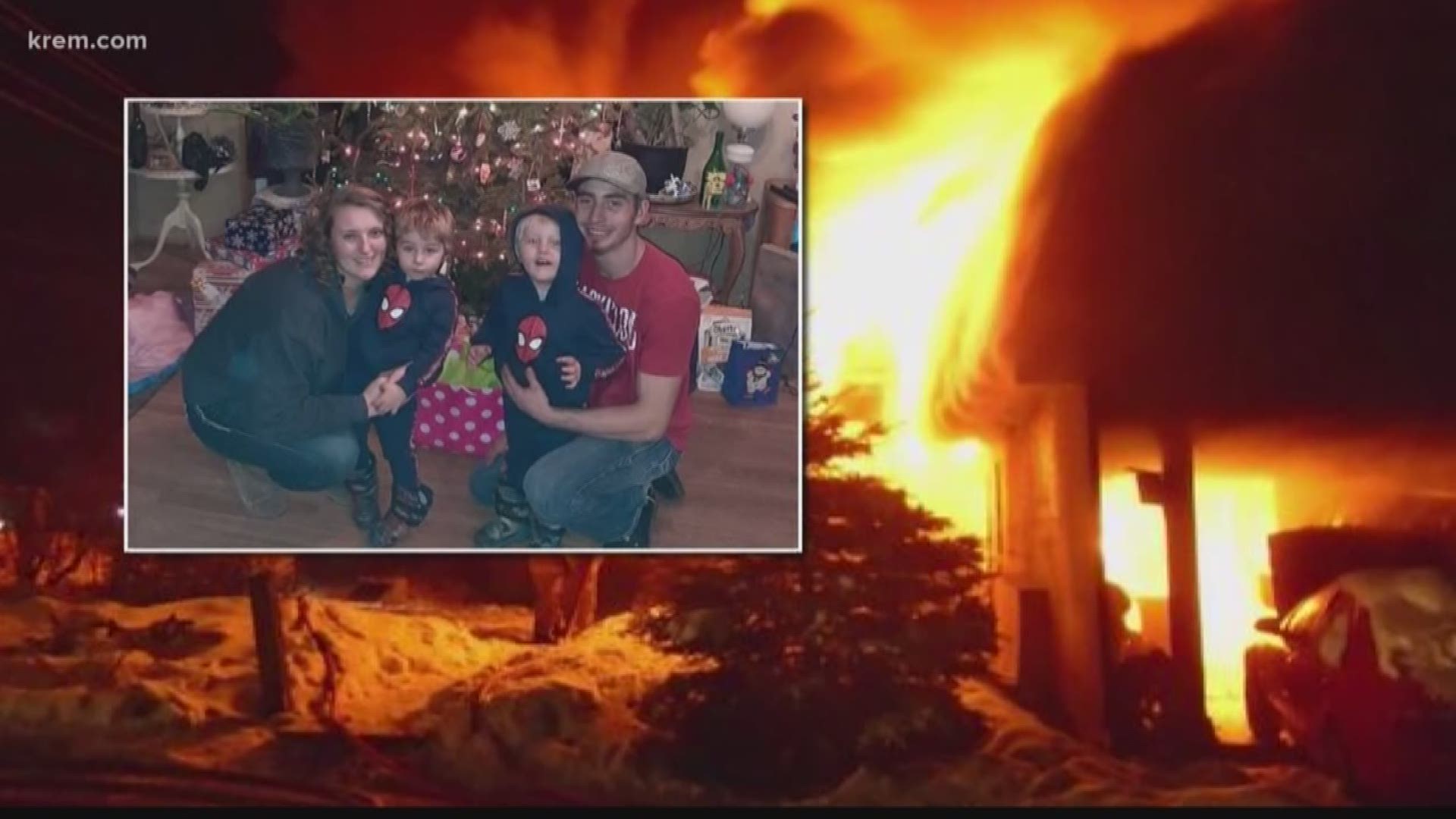 WEIPPE, Idaho — Twin brothers John and Shawn Carr left the world the same way they entered it: Holding one another.

Amidst a tragedy that has rocked the small community of Weippe, Idaho, grieving family members and friends said that they found some peace knowing that the Carr brothers were with one another when they died in a house fire last Friday.

"There are not any words for this," said Tyra Ruberti, aunt of thee-year-old John and Shawn Carr. "We're all destroyed. There's no other way around it."

Investigators said that the Carr family home, located on the corner of 8th Avenue and Highway 11 in Weippe, caught fire early Friday morning following an electrical fault in a light fixture.

The brothers were asleep in the home's living room while the parents slept in a separate bedroom, a family friend told KREM. The boy's mother, Hannah Hueth told investigators that she awoke to smoke in the home and then woke up Chance Carr, the boy's father. Intense smoke and flames prevented Chance from rescuing the boys, said authorities.

"They did everything they could to get to their little guys," said Jason Berreth, a family friend and spokesperson.

Chance and Hanna exited their bedroom through a window in an effort to find another way to save their sons.

"In fact, they both ran around and tried to find another entrance to the home to get to the boys," he said.

The bodies of the brothers were eventually located in the home's kitchen, according to authorities. Berreth said John and Shawn were found in a cabinet, holding one another.

"They started life holding each other and they ended life the same way they started. It's kind of a beautiful story of love in the midst of such tragedy," Berreth said.

Although twins, Ruberti said John and Shawn each had distinct personalities but shared a love of the outdoors.

"Often referred to as 'little monkey boys,' they are true country boys through and through," said Ruberti, fighting back tears. "They loved fishing with their daddy."

Chance had purchased the home in the Clearwater County city of roughly 400 people a couple of years ago, Ruberti said of her brother, but didn't have insurance. Chance and Hannah were a young couple just starting out on their own, she emphasized.

Both came from large families themselves, Ruberti added, noting that many extended family members and community members are also in pain from the fatal fire.

"I don't think there's a person in Weippe or Peirce, or many in Orofino, that don't know the boys pretty darn personally," she said.

An online fundraising effort had brought in over $22,000 as of Monday night to help the family pay for funeral costs and temporarily living expenses. In addition to the home being destroyed, Ruberti said that Hannah and Chance lost all of their belongings.

An account had also been set up for the family at Lewis-Clark Credit Union locations and was accepting donations, Ruberti added.

"People have a heart. How can you not care?" she said of the overwhelming community support.

The tragedy tops off an already difficult period of time for the family, Ruberti said. Chance, who works in the lumber mill in Weippe, had some of his fingers amputated following an accident at work. Berreth said that the couple have experienced deaths of family members in recent years too.

"It's a heart wrenching story, no matter who you are, no matter how well you knew them. It's a tough one to digest," he said.

A funeral service was being planned for this weekend, Berreth said. Once the fire scene is cleared by investigators, Berreth said that several community members who own heavy machinery plan to remove debris from the home.

Berreth, who also serves as a bible instructor, emphasized that Chance and Hannah were seeking spiritual healing through the process too.

"The family has found a lot of peace knowing that God saves and that these boys are with Jesus," he said.