Cole Abshere wrestled with the monster catfish in Lake Terrell for 45 minutes and broke a 20-year state record. 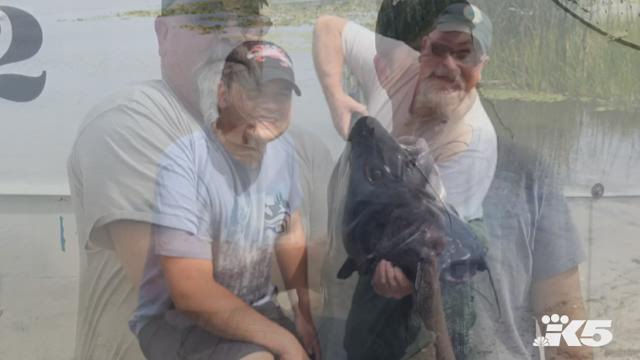 A 20-year record was recently broken by 16-year-old Cole Abshere from Blaine, Washington.

Cole, who first started fishing at 3 years old, was with his grandfather, who he calls Jojo, on Lake Terrell when he wrangled a 37.7-pound channel catfish measuring 42 inches to shore.

They had been fishing for about two and half hours with some small catches and were talking about leaving.

Cole decided he would check his bait and thought he had hooked some weeds on the bottom. His grandfather, however, was sure that there was a fish on the end.

After some tugging, the line took off and they knew it was a fish. Cole reeled it closer to the dock by himself with a simple eight-pound line and a worm.

“My Jojo kept encouraging me and I did it,” said Cole. “It took about 45 minutes and I was tired, but I wasn’t about to give up.”

By the time he got the catfish to the shallow, the line snapped. Only then did they realize the size of the monster catfish. Cole and his grandfather went into the water and wrestled it to the shore.

At 37.7 pounds, it exceeds the previous record by a whole 1.5 pounds caught by Ross Kincaid who held on to that record since 1999.

Cole and his grandfather harvested 25 pounds of meat from the fish and donated the head and spine to the Washington Department of Fish and Wildlife.

“I’m assuming the fish that Cole caught was 14 years old and was stocked in Lake Terrell in 2005,” said Justin Spinelli, WDFW catfish expert.

They sent the spine to labs to test the age and expect to get results back within two weeks.

According to Spinelli, the WDFW stock channel catfish in select lakes when they are about eight inches long and expect them to grow to about 15 inches in two years, 18 inches in five years, and exceed 25 inches in 10 years.

“It’s rare to see them survive this long and get to this size,” said Spinelli.

The WDFW is cleaning the head and hope to use it for education and research.

Cole’s favorite part about fishing is just being outside and hanging with his friends. When he’s not fishing, Cole spends his time playing video games.

“I enjoy video games, but nothing beats being outside and fishing,” said Cole. “In fact, I was wearing a shirt that said ‘I’d Rather Be Outside!’”

He wants to get his saltwater fishing license next so he can fish at the Blaine Marina dock by the ocean side with his friends.

RELATED: Why Ashton Kutcher just mic-dropped a catfish at the CMT Awards