Video: Teenage girl turns on clothes dryer with dog inside

The video sparked outrage on social media when the incident was streamed on Instagram Live. Now police are investigating. 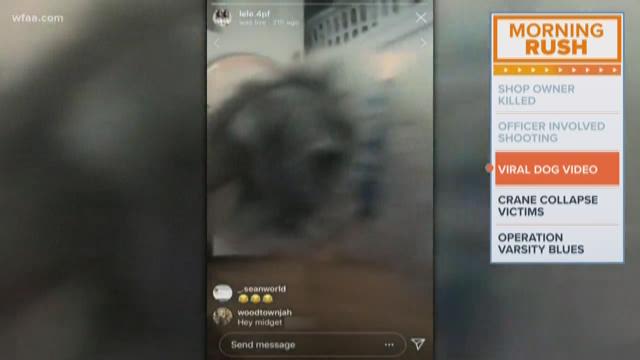 Updated at 5:55 p.m. with new information about the investigation.

Lewisville police have taken over an investigation into a video showing a teenager putting her small dog in a clothing dryer and turning it on.

On Monday, Dallas police said they wanted help identifying a female shown on video putting the dog in the dryer. By Monday afternoon, investigators had determined the incident happened in Lewisville.

The video sparked outrage online after the incident was streamed on Instagram Live.

The teenager records herself picking up her small dog, putting it in the dryer, closing the door, turning on the dryer and then opening the door. She is heard laughing throughout the video.

The dog appeared to be OK but ran away from the young woman and cowered under a table.

Several people commented online that the girl is from Dallas.

Dallas police officials confirmed Monday that they were investigating, along with Dallas Animal Services.

Lewisville authorities took over the investigators after meeting with Dallas detectives.

The girl will not be publicly identified because she is a minor, Lewisville police said.

Officials said the incident is being investigated as cruelty to non-livestock animals, a criminal offense.

It's unclear if the teenager will be criminally charged or whether police will comment further.

"Due to the age of the person involved, few details in this case may be released," Lewisville police said in a written statement.