VERIFY: Yes, Washington and Idaho have safeguards to prevent people from voting twice

With more and more people voting through mail, questions have been asked of the security of our elections. 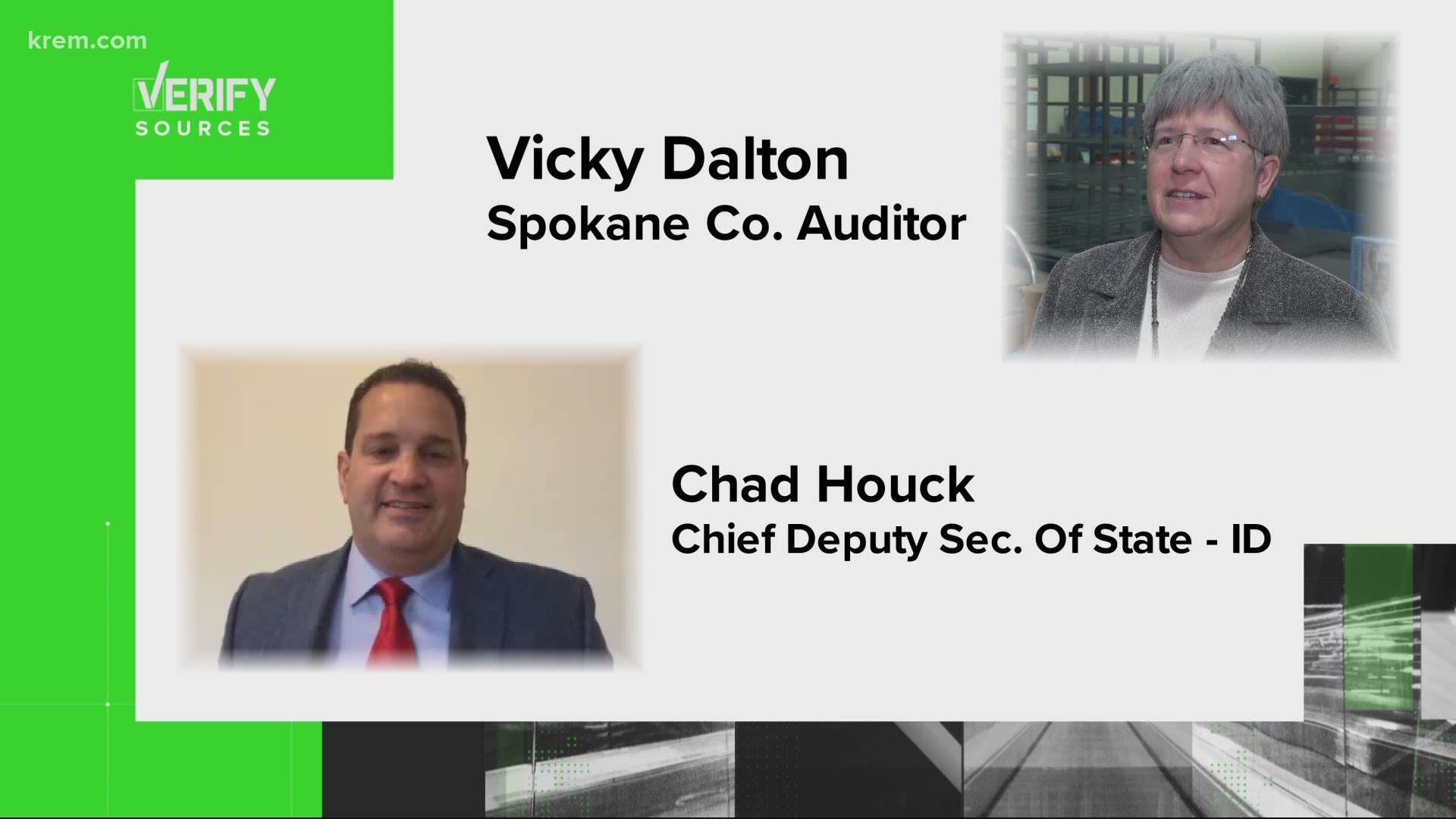 SPOKANE, Wash. — In 34 days, Americans will cast their vote for the next president, and with the pandemic raging on, more Americans are expected to cast their ballot through the mail this election compared to previous elections.

That’s led to a lot of questions and claims about the security of our voting systems.

“KREM and other local news station report that mail in ballots are being sent out to voters soon. They also state if you don’t get one in the mail that another will be sent to you. How does the election board verify that the voters didn’t actually get the first absentee ballot before sending a new one? Or, is there some other way for the election board to verify that voters only vote once?”

How do states prevent people from voting twice?

Washington is a vote-by-mail state where every registered voter is mailed a ballot.

“So, every time we send out a ballot out to the voter that goes into the voter’s record, so we know if we sent one ballot, two ballots, three ballots, and each one of those envelopes is indicated [with] which sequence number that is,” Dalton said.

It’s the same process if a voter prints their ballot online, Dalton said. The county elections office knows when it’s been printed. It’s in the voter’s record and staff know which ballot that is when it comes back to the office.

RELATED: VERIFY: Spokane County processes mail-in ballots as they arrive, not all at once

“There is a bar code on the envelope for the ballots that we send out from the office and for those that are printed online there’s also an indicator on the oath page that tell us which ballot it is,” Dalton said. “So, all of those ballots are tracked and as soon as they come into the office we run them through the scanner and we know immediately who the voter is and which ballot it is.”

But, what about Idaho?  It is not a vote-by-mail state. However, voters can request an absentee ballot be mailed to them. In the era of COVID-19, elections officials say a lot of Idahoans are choosing to vote absentee.

“We’re anticipating that being as much as 50 percent of our voting population that’s going to utilize those absentee ballots,” Houck said.

“When you request an absentee ballot here in Idaho the first thing we are going to do is we’re going to check and see if you have any outstanding ballot requests already,” Houck said. “So, if you were to request online and then submit a paper form as well to the country clerk that online request is already going to be reflected in the state voter registration system as, ‘absentee ballot pending.’ So, that paper request is not going to be accepted.”

In the event that a voter does get two ballots and tries to voter twice - which is a felony – Houck said there is a process in place to make sure only one ballot is counted.

“Lets say, in your home you got ballots and you decided you wanted to vote both of them and you signed for both of them, only the first one that come back of those two is actually going to be the one that is counted,” Houck said.

We can verify that yes, election offices in Washington and Idaho have systems in place that track every ballot mailed to voters or printed online. Those systems prevent people from voting more than once per election.

Have a question for our KREM Verify team? Leave a voicemail for our own Mark Hanrahan at 509-838-7334, email us at verify@krem.com, or visit krem.com/verify.