While it may seem logical that no power equals no cell service, the reality is that cell providers have taken steps to keep service up. 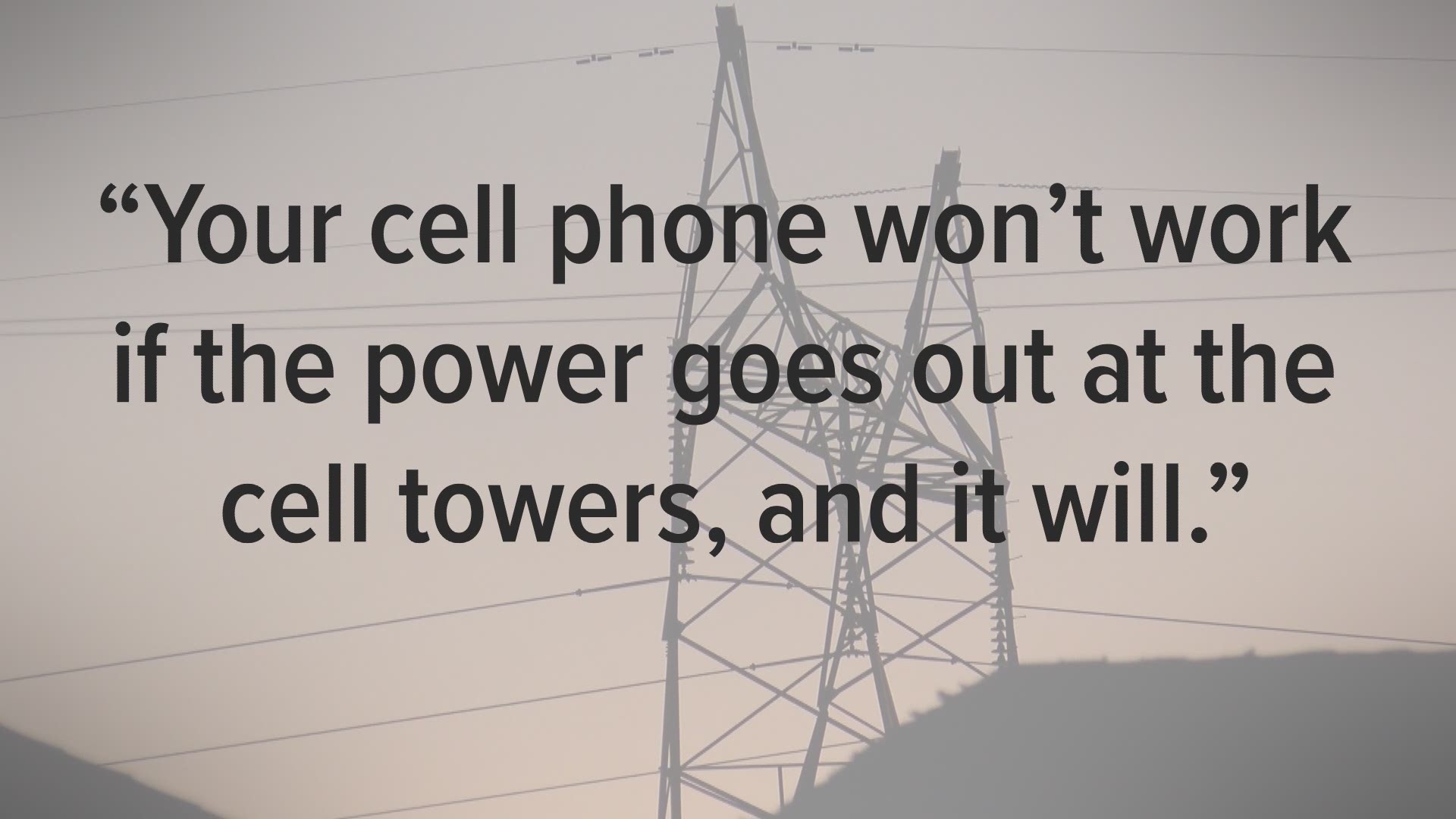 As power outages continue across parts of California, there are multiple comments online right now that look like this: “your cell phone won’t work if the power goes out at the cell towers, and it will.”

That claim sounds like common sense, right? If the cell towers lose power they can’t function. But is that actually true?

Before you throw your phone into airplane mode to save power, read what we found out.

Will people who lose their power in the California outages also lose cellphone service?

Not exactly. It turns out that many of the providers have backup systems in place or operate emergency generators to make sure that service is still available.

In recent years with fires across the state, the California Public Utilities Commission urged cell providers to install backup power in high-risk locations.

And many of them did that.

A Verizon representative told VERIFY that many of their towers have backup generators and battery systems.

"Verizon is prepared to keep customers connected during any disruption in commercial power.

"Verizon's network reliability is based on having a comprehensive backup power strategy should commercial power be lost due to an emergency or extreme weather. We have generators and backup batteries at the majority of our cell sites (towers) and all of our switch locations (network nerve center) to keep our network up and running if commercial power is lost. And we are able to refuel our generators to keep them running. Having this backup to our backup plan is critical to our strategy. This ensures our network can continue serving customers indefinitely until commercial power is restored.”

A T-Mobile representative said the carrier has backup generators too and would be operating mobile teams to augment service in certain areas. They also provided a statement.

An AT&T representative told VERIFY that they were working to get backup generators in place.

“Like all PG&E customers, we are also affected by this power shutdown. Overall our network continues to perform well. We are aware that service for some customers may be affected by this event and are working as quickly as possible to deploy additional generators and recovery equipment. To keep our wireless and prepaid customers in areas directly affected by the planned power outage connected during this difficult time, we’re providing unlimited talk, text and data,” they said.

And Sprint sent a press release as well. They said they also had backup generators, and would be providing portable ones to locations that didn’t.

Don’t just assume you won’t have service. The idea that all cell towers will shut down without power is actually false. The major providers have generators and backup plans to keep service.

That’s an important distinction. Without power, and without service, people may be tempted to turn their phones off or put them in airplane mode to conserve battery.

That’s still a good idea if you can’t charge your phone, but also check periodically to see if you do have service and make sure there aren’t any alerts or warnings for your area.