Toddler's family fights for access to “World’s Most Expensive Drug”

Maddy Bruce has been prescribed a drug that could cure her potentially deadly disease. But, at $2 million dollars, insurance won’t pay. 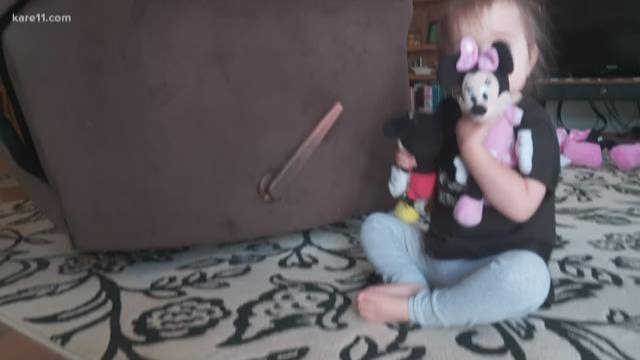 BLAINE, Minn — What is the value of a possible cure?  For a Blaine mother, it is two million dollars, the cost of the world’s most expensive drug.  But it’s a drug that their insurance will not cover.

Credit: KARE
Zolgensma is the world's most expensive drug

Angie Bruce has decorations already up for a birthday party.  Her daughter Maddy turns two in less than three weeks.   But for Maddy, her second birthday is more a deadline than a celebration.

It is the date when she will be too old to receive a medication that could cure her Spinal Muscular Atrophy, or SMA.

Zolgensma, a gene therapy treatment for SMA was approved earlier this year by the FDA for use in children – but only up to two years old.

It is hailed in the SMA community as a groundbreaking treatment, but it is wildly expensive, at more than two million dollars for a single dose.

“It’s just mind-blowing,” Angie said of the cost and yet she desperately wants to provide it for her daughter.

The family is insured through the State of Minnesota which has repeatedly refused to pay for Zolgensma for Maddy.

Angie first learned her daughter had SMA before she was even born.   It was a devastating diagnosis.

Credit: KARE
Maddy's mom Angie has been fighting for insurance coverage of Zolgensma

“When she told me that she had SMA, I just I couldn’t even talk on the phone I just broke down crying,” Angie recalls.

SMA is a genetic disorder that causes muscle weakness.   In the worst cases, it leads to death for children.  In other cases, if left untreated, SMA causes severe respiratory issues, prevents kids from breathing on their own and makes walking impossible.

“I had thought we were going to lose her,” Angie said.

When Maddy was born another drug called Spinraza offered hope.  It requires spinal injections 3 times per year for a patient’s entire life.  The cost is high – more than $100,000 per injection.   Maddy received her first dose of Spinraza when she was just two days old.  The state has agreed to cover the cost of that drug.

“I think it has been life changing for her,” Angie said.

Thanks to that treatment, Maddy breathes on her own, scoots across the floor and can even pull herself up to standing.   But the injections are a struggle, Maddy fights back so much she has to be sedated.

“Undergoing the Spinraza injections is really hard on her little body and he little spirit,” Angie said.  “I fight back tears every time. Just cause it’s so traumatizing for her.”

Spinraza treats symptoms, but it is not a cure. Angie and her doctors believe the newly approved drug Zolgensma could be.

Priced at two million dollars, Zolgensma made headlines for the eye-popping cost.  In the long term, the one time treatment is actually less expensive than a lifetime of Spinraza injections.  But the high price has raised ethical dilemmas about what a cure for kids like Maddy is worth.

In a statement Minnesota Department of Human Services, which administers Minnesota’s Medicaid program, pointed to a controversy embroiling Zolgensma and its maker Novartis Pharmaceuticals. The FDA says scientists for Novartis manipulated test data.  But the FDA has also said it believes the drug is safe and has not moved to take the it off the market.

“The health and safety of Minnesotans is our top priority when we make decisions regarding coverage of new drugs. The FDA has recently raised concerns about Zolgensma. We take these concerns seriously and will continue to promote the use of other treatments that have been proven to be effective,” the statement from DHS said.

Angie plans to appeal, again, but she is running out of time.

She says she is inspired by Maddy’s strength to keep fighting.  She hopes when Maddy blows out the candles on her second birthday, she is not extinguishing her hopes of a cure.

A GoFundMe page has been set up for those who would like to help out with Maddy's battle to get Zolgensma.