Ways to help protect your home from wildfire

We spoke to a woman whose home is still standing after a wildfire. It was the only one that didn't burn down out of nearly 40 homes in her neighborhood. 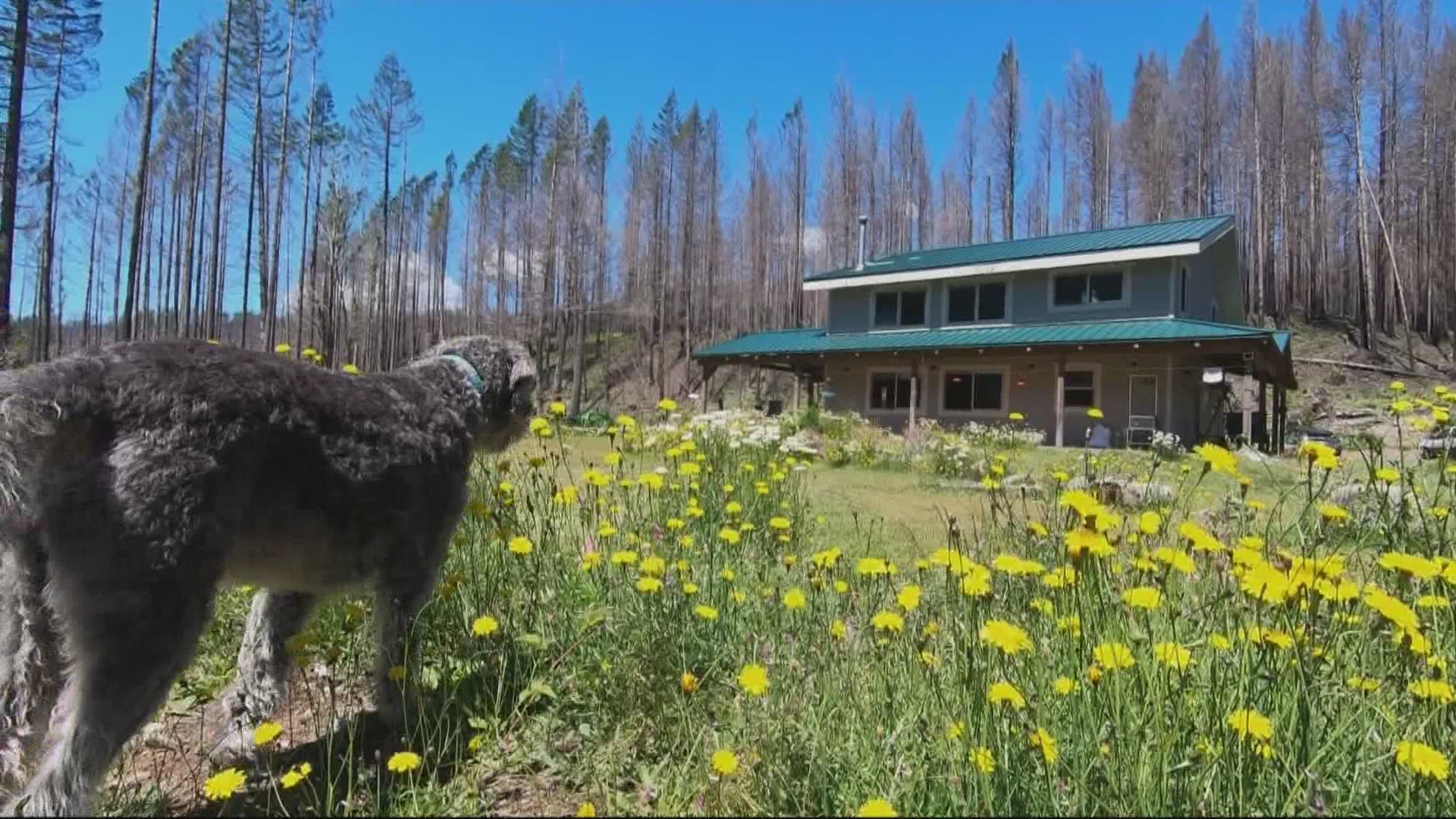 Summer is officially here and with the wildfire threat that comes along with it, we all need to be thinking about how to protect our homes.

Last year, thousands of homes in Oregon were lost to fire during a historic fire season.

While many homes burned, there were some located in fire-affected areas that didn’t burn.

Mary Bradshaw and her husband own a home in the North Fork area of Lyons. Their home was the only one out of almost 40 in their neighborhood that survived last September’s wildfire and is still standing.

Bradshaw said before the wildfire, there were 37 homes in her immediate area, all of them surrounded by trees.

Initially, she and her husband didn’t think the fire would reach them. But once the sky turned orange, they knew it was time to go. When the Bradshaws finally returned, they discovered every home around them had burned.

“We felt pretty guilty actually because our place was still standing and all these people […] had lost everything,” said Bradshaw.

But they also felt grateful for the decisions they'd made so many years ago.

“When we built 10 years ago, we knew we were building in a forest,” said Bradshaw.

“Metal roofs were a no brainer because metal doesn't typically burn. We have fiberboard cement siding so it doesn't burn,” she said.

“The porch is all cement […] and around the foundation, we have stones as opposed to any vegetation,” said Bradshaw.

When she and her husband built their home, they didn’t install gutters, which eliminated leaf and debris buildup that could catch fire. Instead, they opted for French drains. In addition, the closest trees were 30-40 feet away from the home.

“Nothing is near the house. Nothing is overhanging the house. So it would be really hard for something to fall on the rocks, next to the house, and cause it to catch fire,” Bradshaw said.

Right now flowers are in bloom near her home, but she said soon those will be gone.

“I know people love to put flowers and trees right up by their house. But don’t,” said Bradshaw.

“No flower boxes on the window, just things like that.”

Further up Highway 22 in Gates, the Peterson family is in the middle of rebuilding their home that burned down.

They're building with fire in mind, making both their patio and siding from cement.

“I'm no Fire Marshal but I think cement should hold up better compared to wood,” said Kris Peterson.

Fire-resistant material can be more expensive, but there are also less costly options.

“It can be as simple as making sure you're clearing out your gutters,” said Jenna Trentadue, the national fire plan coordinator for the Oregon Department of Forestry.

She said the big concern involves the small embers that can travel and catch stuff on fire. Simple things to think about include keeping grass cut and keeping anything flammable away from the home. That includes any vegetation or lawn furniture. Both Bradshaw and Trentadue also said people should consider not using bark or wood chips around their homes.

“It’s actually the little stuff around the home that is the larger threat,” said Trentadue.

Trentadue used the example of building a campfire and how smaller, more flammable pieces of kindling are used to get the fire started.

For people whose homes survived and may have wood decks, Trentadue said instead of replacing the whole deck, it can be less costly to only replace the planks located closest to the home with more fire-resistant material. The idea is to create a barrier between the home and the wooden deck.

Bradshaw’s neighbor, Steve Mitchell, is in the process of rebuilding his home as well and is also keeping fire-resistant materials in mind. However, he said in a fire as intense as last year’s Beachie Creek Fire, he doubts fireproofing a home would have made much difference.

Still, Trentadue said utilizing fire-resistant materials and creating a buffer, or defensible space, around a home is still important.

“It's always about lowering risk. You're not going to be 100% fireproof,” Trentadue said.

Back at the Bradshaw’s home, Mary said building with fire-resistant materials was more expensive, but to her, it was worth it.

The two structures on her property that did burn down were a shed and well house. Both were surrounded by wood chips or vegetation.

In addition to using fire-resistant materials while building a home and creating defensible space around a home, Bradshaw said the one other thing she would want to tell others is to make sure they have an inventory of everything they own. She said it could be a list, photos, or a video. Having an idea of what you own will help save time when it comes to insurance claims.

More helpful information can be found here on the Keep Oregon Green website as well as this Oregon Department of Forestry webpage.