Fishermen are sounding the alarm as blistering heat waves and extended drought in the U.S. West raise water temperatures and imperil fish from Idaho to California. 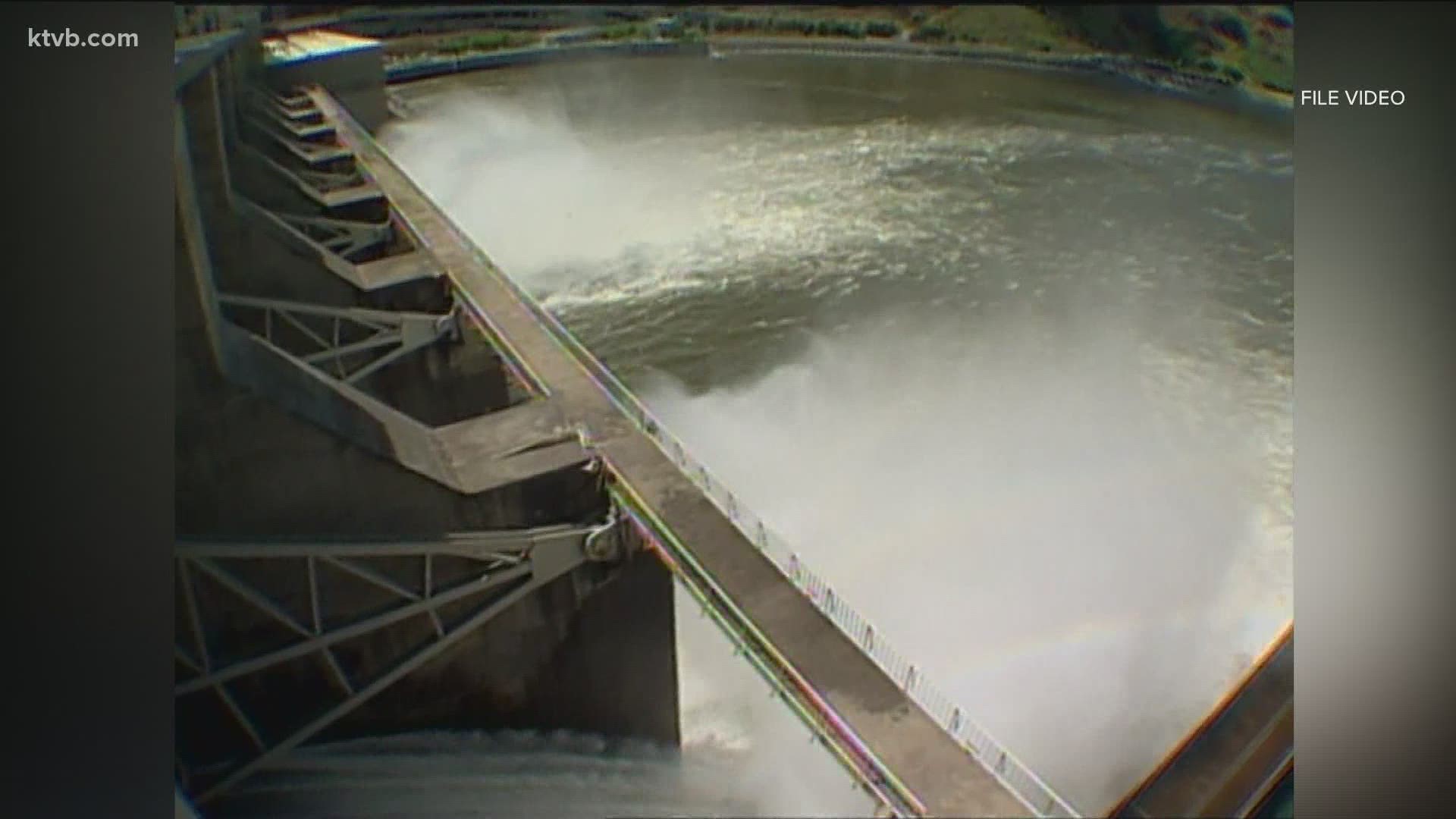 SAN FRANCISCO — Editor's Note: The video with this story first aired in Feb. 2021. It details a plan by Idaho Rep. Mike Simpson to breach four dams on the lower Snake River to save salmon.

Baby salmon are dying by the thousands in one California river, and an entire run of endangered salmon could be wiped out in another. Fishermen who make their living off adult salmon, once they enter the Pacific Ocean, are sounding the alarm as blistering heat waves and extended drought in the U.S. West raise water temperatures and imperil fish from Idaho to California.

Hundreds of thousands of young salmon are dying in Northern California's Klamath River as low water levels brought about by drought allow a parasite to thrive, devastating a Native American tribe whose diet and traditions are tied to the fish. And wildlife officials said the Sacramento River is facing a "near-complete loss" of young Chinook salmon due to abnormally warm water.

A crash in one year's class of young salmon can have lasting effects on the total population and shorten or stop the fishing season, a growing concern as climate change continues to make the West hotter and drier. That could be devastating to the commercial salmon fishing industry, which in California alone is worth $1.4 billion.

The plummeting catch already has led to skyrocketing retail prices for salmon, hurting customers who say they can no longer afford the $35 per pound of fish, said Mike Hudson, who has spent the last 25 years catching and selling salmon at farmers markets in Berkeley.

Hudson said he has considered retiring and selling his 40-foot (12-meter) boat because "it's going to get worse from here."

Winter-run Chinook salmon are born in the Sacramento River, traverse hundreds of miles to the Pacific, where they normally spend three years before returning to their birthplace to mate and lay their eggs between April and August. Unlike the fall-run Chinook that survives almost entirely due to hatchery breeding programs, the winter run is still largely reared in the wild.

Federal fisheries officials predicted in May that more than 80% of baby salmon could die because of warmer water in the Sacramento River. Now, state wildlife officials say that number could be higher amid a rapidly depleting pool of cool water in Lake Shasta. California's largest reservoir is filled to only about 35% capacity, federal water managers said this week.

"The pain we're going to feel is a few years from now, when there will be no naturally spawned salmon out in the ocean," said John McManus, executive director of the Golden State Salmon Association, which represents the fishing industry.

When Lake Shasta was formed in the 1940s, it blocked access to the cool mountain streams where fish traditionally spawned. To ensure their survival, the U.S. government is required to maintain river temperatures below 56 degrees Fahrenheit (13 Celsius) in spawning habitat because salmon eggs generally can't withstand anything warmer.

The warm water is starting to affect older fish, too. Scientists have seen some adult fish dying before they can lay their eggs.

"An extreme set of cascading climate events is pushing us into this crisis situation," said Jordan Traverso, a spokeswoman for the California Department of Wildlife and Fish.

The West has been grappling with a historic drought and recent heat waves worsened by climate change, stressing waterways and reservoirs that sustain millions of people and wildlife.

As a result, the state has been trucking millions of salmon raised at hatcheries to the ocean each year, bypassing the perilous downstream journey. State and federal hatcheries take other extraordinary measures to preserve the decimated salmon stocks, such as maintaining a genetic bank to prevent inbreeding at hatcheries and releasing them at critical life stages, when they can recognize and return to the water where they were born.

Fishermen and environmental groups blame water agencies for diverting too much water too soon to farms, which could lead to severe salmon die-off and drive the species closer to extinction.

"We know that climate change is going to make years like this more common, and what the agencies should be doing is managing for the worst-case scenario," said Sam Mace, a director of Save Our Wild Salmon, a coalition working to restore wild salmon and steelhead in the Pacific Northwest.

"We need some real changes in how rivers are managed if they're going to survive," she added.

On the Klamath River near the Oregon state line, California wildlife officials decided not to release more than 1 million young Chinook salmon into the wild and instead drove them to hatcheries that could host them until river conditions improve.

Much is riding on this class of salmon because it could be the first to return to the river if plans to remove four of six dams on the Klamath and restore fish access to the upper river go according to plan.

Across the West, officials are struggling with the similar concerns over fish populations.

In Idaho, officials recognized that endangered sockeye salmon wouldn't make their upstream migration through hundreds of miles of warm water to their spawning habitat, so they flooded the Snake River with cool water, then trapped and trucked the fish to hatcheries.

And environmentalists went to court this month in Portland, Oregon, to try to force dam operators on the Snake and Columbia rivers to release more water at dams blocking migrating salmon, arguing that the effects of climate change and a recent heat wave were further threatening fish already on the verge of extinction.

Low water levels are also affecting recreational fishing. Officials in Wyoming, Colorado, Montana and California are asking anglers to fish during the coolest parts of the day to minimize the impact on fish stressed from low-oxygen levels in warm water.

Scientists say the salmon population in California historically has rebounded after a drought because they have evolved to tolerate the Mediterranean-like climate and benefited from rainy, wet years. But an extended drought could lead to extinction of certain runs of salmon.

"We're at the point where I'm not sure drought is appropriate term to describe what's happening," said Andrew Rypel, a fish ecologist at the University of California, Davis. He said the West is transitioning to an increasingly water-scarce environment.

Hudson, the fisherman, said he used to spend days at sea when the salmon season was longer and could catch 100 fish per day.

This year, he said he was lucky to catch 80 to sell at the market.

"Retiring would be the smart thing to do, but I can't bring myself to do it because these fish have been so good to us for all these years," Hudson said. "I can't just walk away from it."