Skydiver who crashed into Sandpoint home flown to Kootenai Health

Around 8:45 a.m. emergency crews were called to a home on Larch Street for a report of a skydiver who landed on a roof and was possibly impaled. 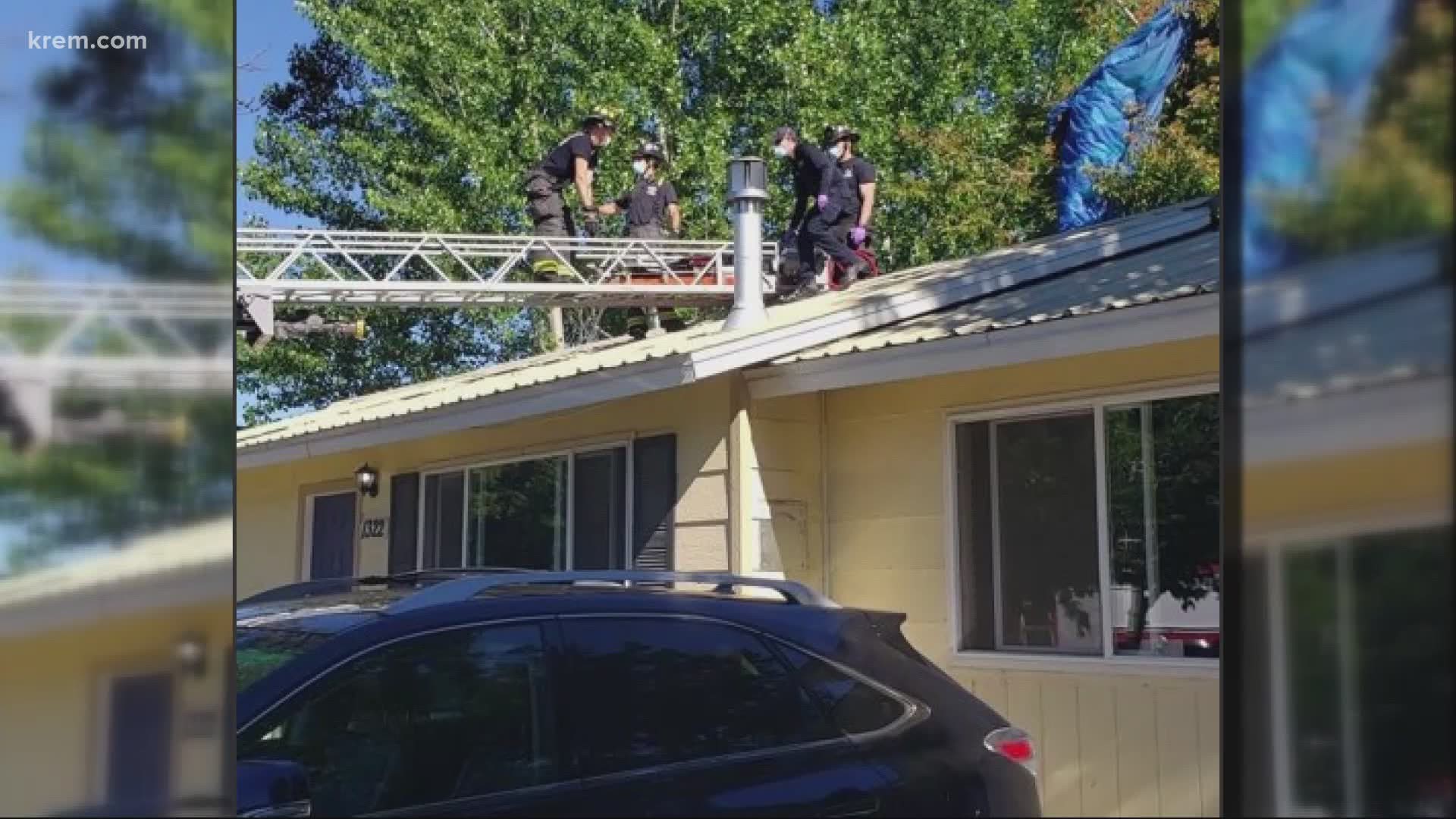 SANDPOINT, Idaho — A skydiver was injured Sunday morning after landing on a house in Sandpoint.

According to a Facebook post from Bonner County EMS, around 8:45 a.m. emergency crews were called to a home on Larch Street for a report of a skydiver who landed on a roof.

Selkirk Fire Department crews were able to get the skydiver off the roof. The victim was taken by ambulance to the Sandpoint Airport to meet a Life Flight helicopter, according to the post. As of Tuesday evening, the man's condition was not known.

John Demaka owns the house where the man crashed. He said when you consider how many trees and power lines are in the neighborhood, he's happy it wasn't worse. He said he was at the store when his wife gave him the strange news.

"She called me and said, 'Don't be surprised, we've got a bunch of fire engines and ambulances and cops at the house. A parachuter decided to drop in on us this morning," Demaka said.

According to city leaders, a group of skydivers where parachuting on Sunday and was aiming for Sandpoint's airport when a gust of wind pushed them off course.

A witness told authorities he was aiming for a nearby field, possibly at a school, but had to make a split-second decision on where to land. The roof of the Demakas home was his best bet.

"A big bang. I don't know why, she thought I had come home and somehow climbed up on the roof for some reason," Demaka said.

Both local city, fire, and EMS officials note that something like this is practically unheard of in Sandpoint. Winds can shift often, Selkirk Fire and Rescue said, thanks in part to Lake Pend Oreille and nearby mountains.

The skydiver was part of a company based out of Prosser, Washington, according to local reports. The company's Facebook page indicated that the group was visiting Sandpoint for the weekend and was providing customers with a limited number of skydiving jumps.

Sandpoint Skydiving, the company who was working with the skydiver that landed on the roof, released the following statement:

On 07/26/2020, four experienced skydivers exited a skydiving aircraft over the Sandpoint Airport in Bonner County Idaho. All four skydivers successfully deployed their main parachutes and began their descent towards the airport. None of the jumpers were able to navigate their parachutes back to the airport property and landed their parachutes just south of the airport.

Three of the four skydivers landed without incident. However, one of the skydivers sustained injuries to his elbow and leg after colliding with a tree, before landing on a roof. Bonner County Fire and EMS did an excellent job in the safe recovery and transportation of the jumper. The jumper was transported to Kootenai Medical Center for treatment. Rattlesnake Mountain Skydiving is happy to announce that the jumper will make a full recovery. After debriefing the incident with injured the jumper, we learned that jumper decided to land on the roof rather than risk injury to others by landing on a busy road or going near power lines.

The owners of the house the jumper landed on were extremely helpful during the incident. Rattlesnake Mountain Skydiving is relieved that events such as this are rare and that the injuries the jumper sustained were not more severe.

The Federal Aviation Administration is now looking into what happened.
However, an FAA spokesman said the agency will primarily look at whether the skydiver's parachute was properly packed by someone qualified.