One of the leads for Portland Mountain Rescue said the avalanche hazard on Mt. Hood is high right now because of a large, new batch of snow atop an ice base. 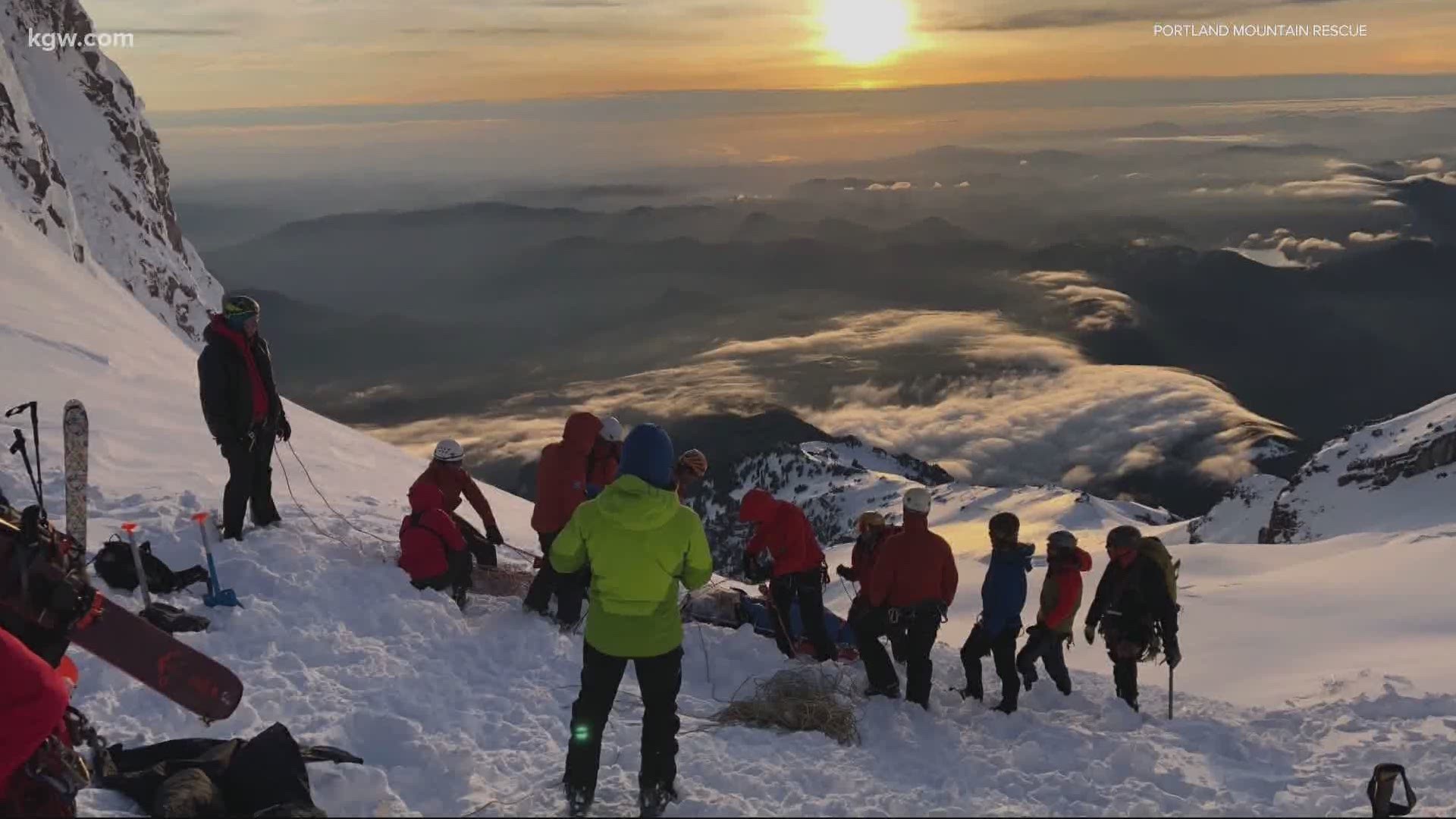 PORTLAND, Ore. — Search and rescue crews are getting some much-needed rest today after spending much of their holiday weekend looking for climbers stranded and injured on Mt. Hood.

"The weekend started off pretty busy on the mountain. We've already had two rescues. The second one came in before the first one was done," said Mark Morford, a rescue lead for Portland Mountain Rescue.

Crews have been busy on Mt. Hood since Friday night. The Clackamas County Sheriff's Office said in total, crews were actively searching for nearly 23 hours.

The first rescue mission started Friday night after a climber summited the mountain, then on his way back down got caught in white-out conditions. He was able to call 911 and investigators said he told the dispatcher he only had a few protein bars, no water, and his cell phone battery was almost dead. Search teams got to him at 2 a.m. Saturday.

"He was badly hypothermic when our teams reached him. Very difficult travel conditions to get to him," said Morford, who was part of the search crew.

Credit: Portland Mountain Rescue
Search and rescue crews find a stranded climber on Mt. Hood at 2 a.m. on Saturday, May 23, 2020.

When Morford describes the conditions as difficult, he means rescuers had to use crampons to cross icy spots, but then they'd sink into chest-deep snow in other, softer spots. He said it was a difficult and exhausting mission.

But search and rescue crews weren’t done yet.

"The second mission that came up this weekend was a couple climbing Leuthold Couloir. That's a challenging route over on the west side of the mountain. They triggered an avalanche that swept them down the route. I know that route well and I'm amazed that they survived with minor injuries," Morford said.

Credit: Portland Mountain Rescue
The area where a second stranded climber was found on Mt. Hood on Saturday, May 23, 2020.

The Clackamas County Sheriff's Office said one of the climbers had a hurt ankle when they were caught in the small avalanche. Her climbing partner was able to call search crews for help. It was also beneficial that the injured climber had a tracking device which helped search and rescue crews locate her as well.

While it's typical for people to go skiing or climbing over Memorial Day weekend, Morford said there are two things that make this holiday weekend different.

"The first is avalanche hazard is quite high. In the past couple weeks, we've seen a bunch of new snow and it's come down on an ice base," he said.

The second factor that isn’t typical: the pandemic.

"50 rescuers, that’s a lot of people. All the teams have conservative protocols, but it's next to impossible to maintain those through a long, difficult mission. So many people are at risk," Morford said.

His message to people looking to enjoy the outdoors, is a simple one.

"Get out. But please be chill and make conservative choices. Let's be safe for everybody," Morford said.

READ: 'I shouldn't have been alive': Silver Mountain avalanche survivor buried for 50 minutes