"There's definitely concerns about hatchery fish and what effects they may or may not have," NOAA Research Fisheries biologist Karl Veggerby said. 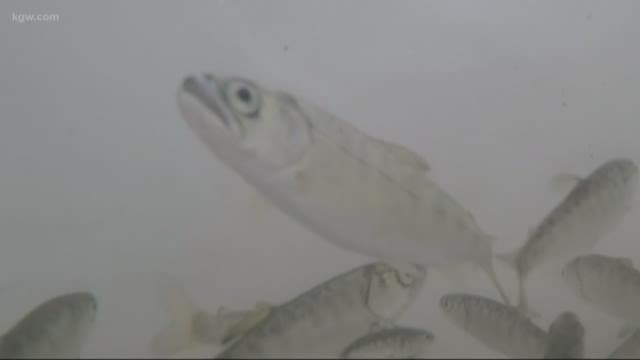 KALAMA, Wash. — Tens of millions of salmon spawned and raised in hatcheries are released into waterways like the Columbia River every year.

The goal is to increase the numbers of the endangered fish. It is no doubt an important effort. But some wonder if this tinkering with Mother Nature could be harming wild salmon.

Scientists with NOAA Fisheries spent the first part of the summer along the Columbia River in Kalama and are hoping to answer that question.

They collected samples of juvenile chinook salmon. Some were wild, spawned in natural waterways. Others were spawned in hatcheries like Fallert Creek, just a few miles up the Kalama River.

In May, the hatchery released close to two million juvenile salmon into the area.

So, why are these scientists now scooping some of them up?

"With the input of all the hatchery fish coming in, we're not quite sure where that leaves the wild stocks," said Regan McNatte, a NOAA Research Fisheries biologist.

Simply put, they want to find out once and for all if the hatchery-raised fish are hurting the wild salmon in this area by competing too much with them for things like food and habitat.

In recent years the Columbia River has seen nearly a 70% loss in salmon habitat. With less resources, the scientists want to know if the hatchery fish are pushing their wild counterparts out.

"There's definitely concerns about hatchery fish and what effects they may or may not have," said fisheries biologist Karl Veggerby.

To answer that question, the researchers first sort the fish, then measure and weigh them. They also collect samples of the young chinook's DNA and analyze the contents of their stomachs.

"We look at the fish before the hatchery releases come down — at stomach contents, their growth rates — then as the hatchery fish come through we see if there's any changes detected," McNatt said.

They're looking for changes that could indicate the wild salmon are not growing as big or as strong as they would be if the hatchery fish were not there.

The smaller and weaker the fish, the less likely they are to survive.

So, why all this research now?

To answer that question, we headed up the coast to the Puget Sound where another endangered species has been making headlines: the Southern Resident Killer Whale.

"Their population is the worst it's been in decades," McNatt said. "They're starving, they need food, and one of the proposals is to increase hatchery production to provide that food for them."

Gov. Jay Inslee wants to spend millions of dollars to increase hatchery fish production with hopes that the extra juveniles will mean hundreds of thousands of adult fish in the Puget Sound and more food for the whales.

While saving the whales is no doubt a top priority, saving wild salmon is just as important.

"We want these stocks to be self-sustaining so they can support the entire ecosystem," McNatt said.

At this point it's too early to tell if there is any impact, researchers said.

They're now taking their findings in the field back to the lab to analyze them and hope to have more answers in the coming months.