The victim of the early morning stabbing was treated and taken to the hospital. The suspect was taken into custody. 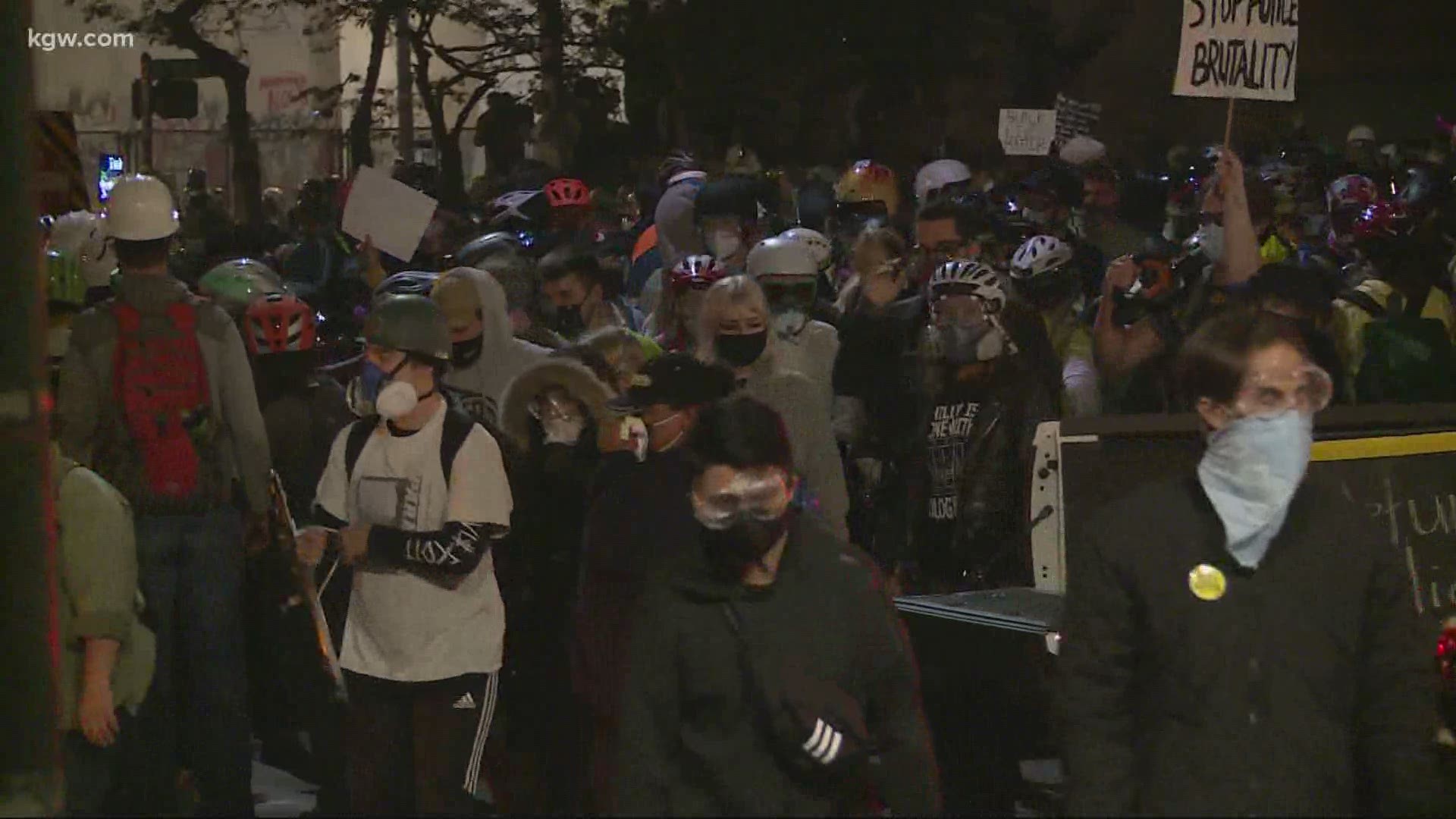 PORTLAND, Ore. — One of the largest crowds seen in recent weeks gathered outside the Multnomah County Justice and federal courthouse in downtown Portland Friday night to protest police brutality, the presence of federal officers and racial injustice.

As has been the case most nights, federal officers deployed tear gas shortly after 11 p.m. to try and disperse the large crowd. KGW's Mike Benner reported several fireworks were set off before the tear gas was released. Some demonstrators began fleeing the area and chanting "feds go home," Benner reported.

Several groups, including the Wall of Moms, were part of Friday night’s demonstration. Also in the crowd was Portland Commissioner Jo Ann Hardesty. Video from The Oregonian’s Beth Nakamura shows Hardesty addressing the crowd around 9:40 p.m. and calling out President Donald Trump for continuing to have federal officers in Portland.

Shortly after 2:30 a.m. PPB declared the activity outside of the Federal Courthouse to be an unlawful assembly.

The Portland Police Bureau responded to a report of a stabbing at around 2:31 a.m. near SW 5th Avenue and SW Salmon Street. The victim was taken to the hospital and the suspect was taken into custody.

Officers are currently investigating a stabbing near SW 5th Ave and SW Salmon St. Do not interfere with their investigation. If you do, you will be subject to arrest.

There have been sustained nightly protests in Portland for eight consecutive weeks following the killing of George Floyd. A photo of Floyd was projected on the side of the Justice Center Friday night.

Although clashes with Portland police remained consistent in the weeks after Floyd's killing, the number of demonstrators in downtown Portland was declining until federal officers arrived earlier this month. Over the last few weeks, more people have continued to show up, prompting city, state and congressional leaders to criticize the federal response, saying federal agents have only escalated tensions with their aggressive tactics, including the use of tear gas and batons. Many officials, including Mayor Ted Wheeler, have asked federal officers to leave the city.

In a different case, a federal judge on Thursday granted a temporary restraining order prohibiting federal officers from arresting journalists or legal observers during protests in Portland, unless a crime was committed.

On Friday, the U.S. Attorney for Oregon Billy Williams showed reporters the damage outside the Mark O. Hatfield Federal Courthouse. According to federal prosecutors, there has been more than $50,000 in damage from graffiti, fires and vandalism.

Williams also lashed out at city and community leaders for not taking control of the nightly protests.

“This is just mindless violence and anyone who defends the violence is enabling this to continue,” he said.

Williams said 18 people have been arrested on federal charges for their alleged roles in the violence at the federal courthouse this week.

RELATED: 'This is just mindless violence': US Attorney for Oregon critical of local leaders response to protests