Additionally, PPB said it has reassigned five officers to alternative duties due to concerns reported by members of the public. 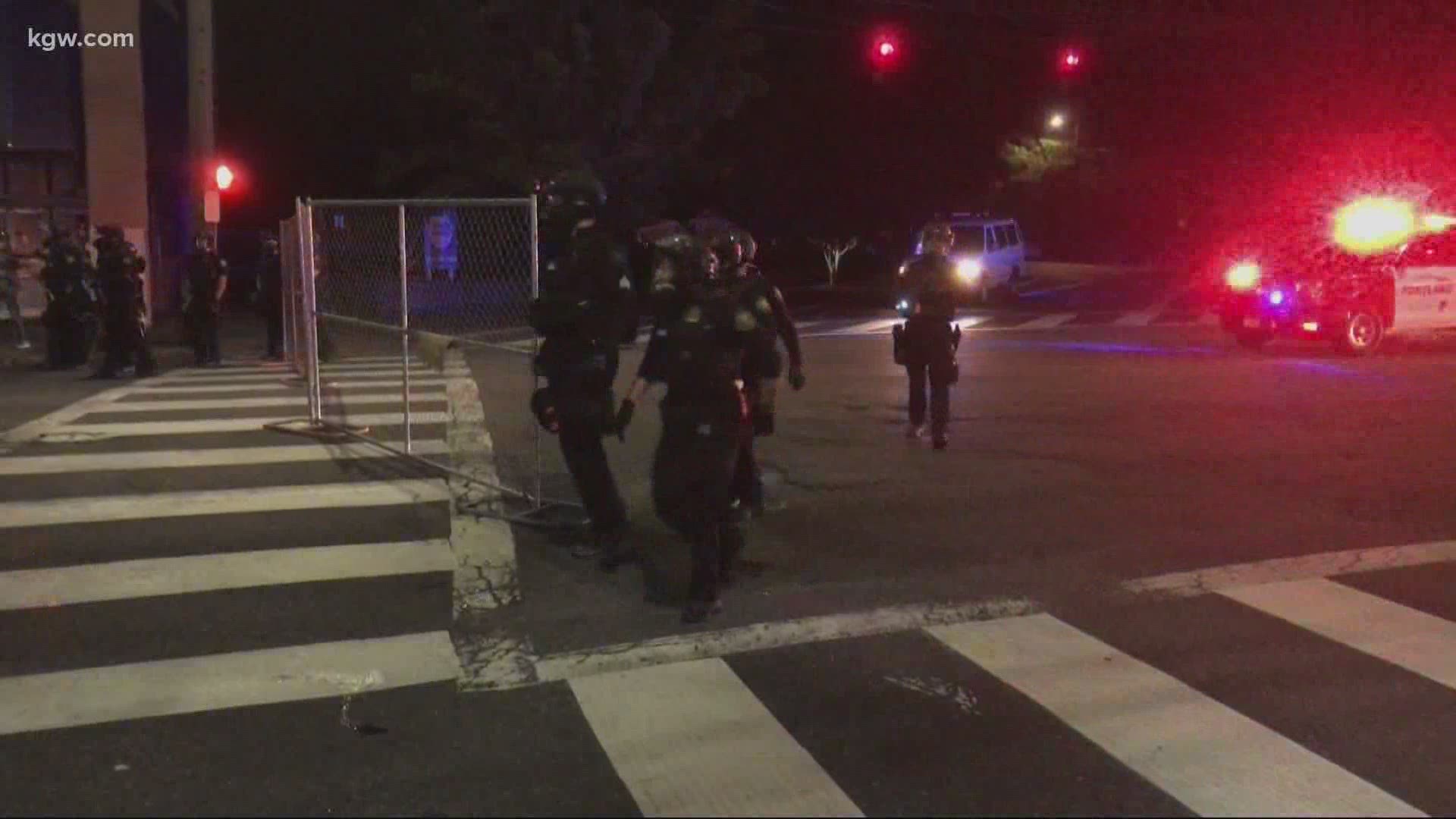 PORTLAND, Ore. — Demonstrators are calling for people to head to the Multnomah County Justice Center, which was where protesters gathered on Thursday as well. Earlier in the afternoon, demonstrators also hosted a sit-in at a Black Indigenous family's home on Mississippi Avenue who are under the threat of eviction.

Friday night's protest will be the first protest in the Portland Police Bureau announced new identification measures for police who deal with protests duties.

According to the agency, it will be issuing every officer a three-digit number that is to be publicly displayed on the helmet of each officer with PPB during crowd managing events. This is in response, according to Portland police, to people having an issue identifying members of the bureau.

The task of putting the numbers on the helmets is set to be completed by Nov. 15.

Additionally, PPB said it has reassigned five officers to alternative duties due to concerns reported by members of the public, though the press release does not specify who or what the complaints were.

"We support peaceful protest and understand that reforms to advance racial justice are necessary and overdue," said Deputy Police Chief Chris Davis in the press release. "We also want the public to be able to easily identify officers if they have concerns. That's why, beginning immediately, we are assigning every officer a three-digit number to be prominently displayed on the helmets required while performing crowd control duties," he said.

Mayor Ted Wheeler took to Twitter in a thread to talk about the changes being made.

The Portland Police Bureau today announced it will assign every officer a three-digit number and require that the number be prominently displayed on officers' helmets during crowd management events.

"Being a police officer is hard and hazardous work on a good day, and Portland's police officers have been responding to protests, demonstrations, and other incidents for over several months. I want to thank each and every member of the Portland Police Bureau for the effort they put into serving this community this year," said Mayor Ted Wheeler. "I also want to thank the Bureau for responding to community concerns about officer identification and use of force," he said.

PPB said that officers were previously asked to wear personal identification numbers and not name tags due to concerns over doxxing. PPB said it is switching from small, hard to read name tags, to having the last name of personnel embroidered onto their uniforms.

"PPB values excellence in service and we hold ourselves to a high standard," said Chief Chuck Lovell. "The vast majority of police response meets or exceeds our standards, but there are times when we fall short. This is why we have a process to review, gather information and assess if the actions were within or outside of policy and from there identify what appropriate intervention is needed, such as counseling, remedial training or discipline. We have heard the concerns from many community members and are working on solutions to address them. We continue to assess our policies and practices as well as identify where we can improve and grow to meet our community's expectations and enhance our service."
Officers will also have a new name tag with the three-digit assigned number on a name tag that will have a large font, according to PPB.

Portland demonstrators participated in a sit-in in North Portland on Friday to help protect against the eviction of a Black Indigenous family that lives on Mississippi Avenue.

Demonstrations have been held at the home before to help protect the family against eviction including an event on September 20, 2020. The family who lives there, the Kinneys, has had the home in their family since the 1950s. #safePDX called the eviction a systemic displacement.

William Kinney said on Sept. 20, "That is wrong. That is highway robbery that's why I think this case has a lot of political interest involved, because of it's location, because of this piece of real estate."

There is a GoFundMe set up to help the Kinney family.