Girls on the Run is starting up its first-ever fall season. 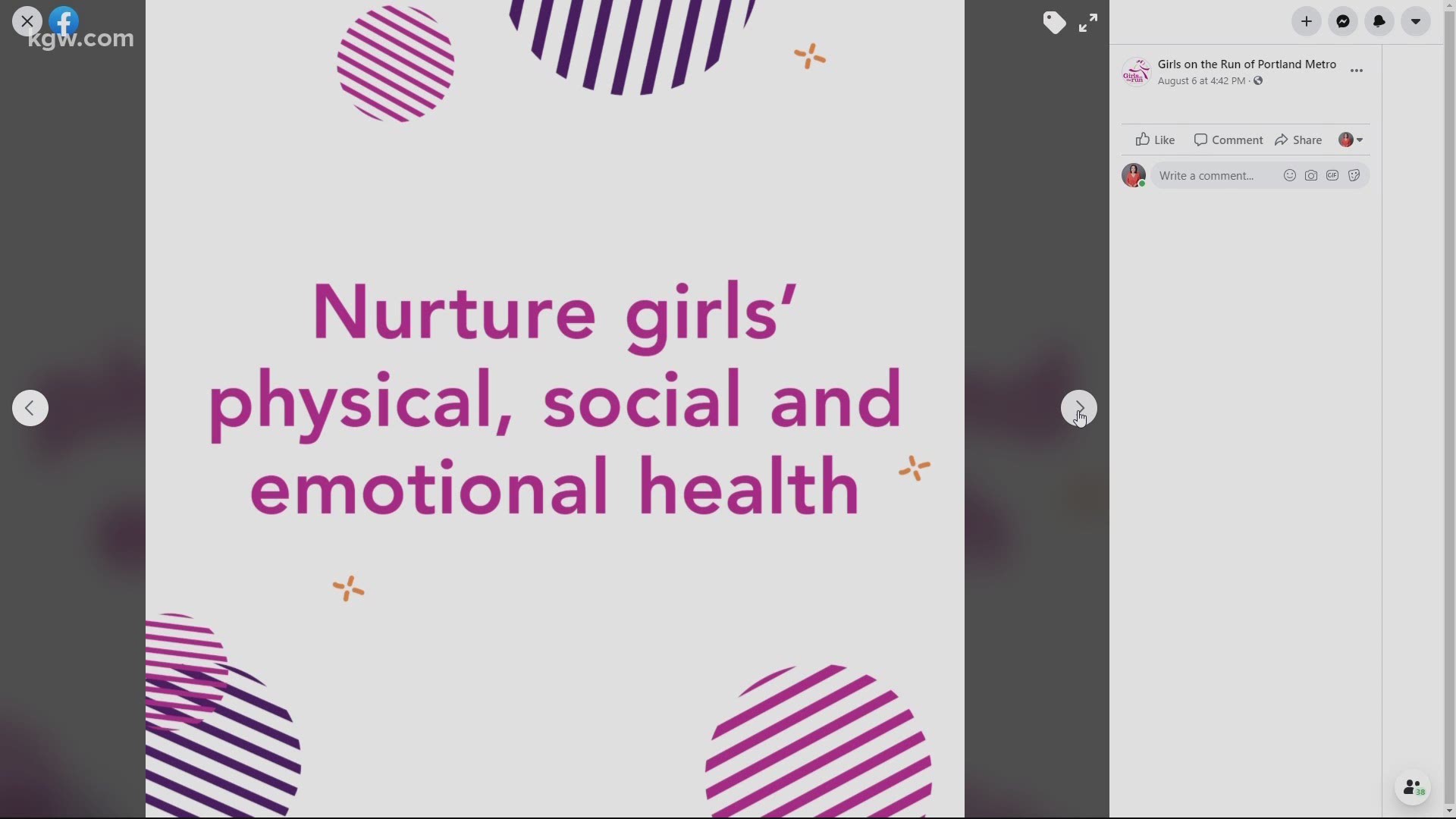 PORTLAND, Ore. — Fall sports will not be happening like usual this year and with kids starting school with full online learning, they’ll need an outlet for physical activity.

Girls on the Run of Portland Metro is one organization that’s hoping to help empower girls physically and mentally as it starts up its first-ever fall season.

It’s something 9-year-old Eloise Armstrong is excited about after so many months of social distancing and not getting to really hang out with her friends.

“Social distancing is different than hanging out with your friends and like watching movies with them, going on walks with them,” said Eloise.

“Some of my friends, I haven’t seen in four months and five months,” she said.

But she may be seeing some of them soon. Because while fall sports have been delayed due to COVID-19, she’ll be participating in Girls on the Run this fall.

Under normal circumstances, Girls on the Run is an after-school program. But Mavia Haight, executive director of Girls on the Run Portland, said they don’t anticipate being at schools this fall.

Instead, for their fall season, they’ll be set up at parks in the Portland area.

Haight said starting up a fall program was already in the works before the pandemic hit.

“We did not quite plan to do it this way but we decided girls need the program now. But we’re are able to do it, so we have an obligation to girls and families in our community to make it work,” said Haight.

She said groups will be small, limited to a maximum of 10 girls. There will also be social distancing and masks. Haight said she’s already consulted local and state health officials.

She said the best part is girls in 3rd-5th grade, over the course of eight weeks, not only increase their physical strength through accomplishing their own running goals but their mental and emotional strength too.

First, girls start off learning about themselves by recognizing their inner strength and emphasizing positive self-talk.

“The second part is about their relationships. So one of them is about being a 'standbyer' instead of a bystander. What an important lesson for raising the next generation of strong, empathetic women,” Haight said.

Then the girls learn about being leaders in their community.

“It makes me feel like, 'Hey I accomplished something and now I can move to a higher goal and I can keep pushing myself to do those goals,'” said Eloise.

Besides, she said she’d rather be doing other things than sit at her house watching the hours go by.

Registration for the Girls on the Run fall season, which starts the week of September 14, has already opened. There are a limited number of spots available, but a lottery system is in place. It closes on Sunday, August 23.

Haight said the eight-week long season costs $180, but there’s financial help available for families that can’t pay. She said there are boxes parents can check an online form for financial help.

“We want to make sure any interested girl is able to participate in our program regardless of her family’s income and we especially know that a lot of families are struggling. So, we have been fundraising as much as we can and are continuing to. so that we can continue to say yes to every single girl who wants to say yes to Girls on the Run,” Haight said.

She also said Girls on the Run is looking for volunteer coaches. The more coaches they can get, the more girls can participate. The commitment is two times a week for eight weeks. Each session is two hours long.

“You can be a girl’s hero right now and when you think, if you decide to coach, that’s 10 girls who get to do the program this fall. It’s just such a ray of light in a really hard time,” said Haight.

Typically Girls on the Run also serves 6th-8th graders, but its website says this fall that specific program won't be available.

RELATED: Girls on the Run goes virtual to empower girls