"Leaders are working as hard as they can to give protesters the right to assemble peacefully," Mayor Wheeler said at a Monday morning news conference. 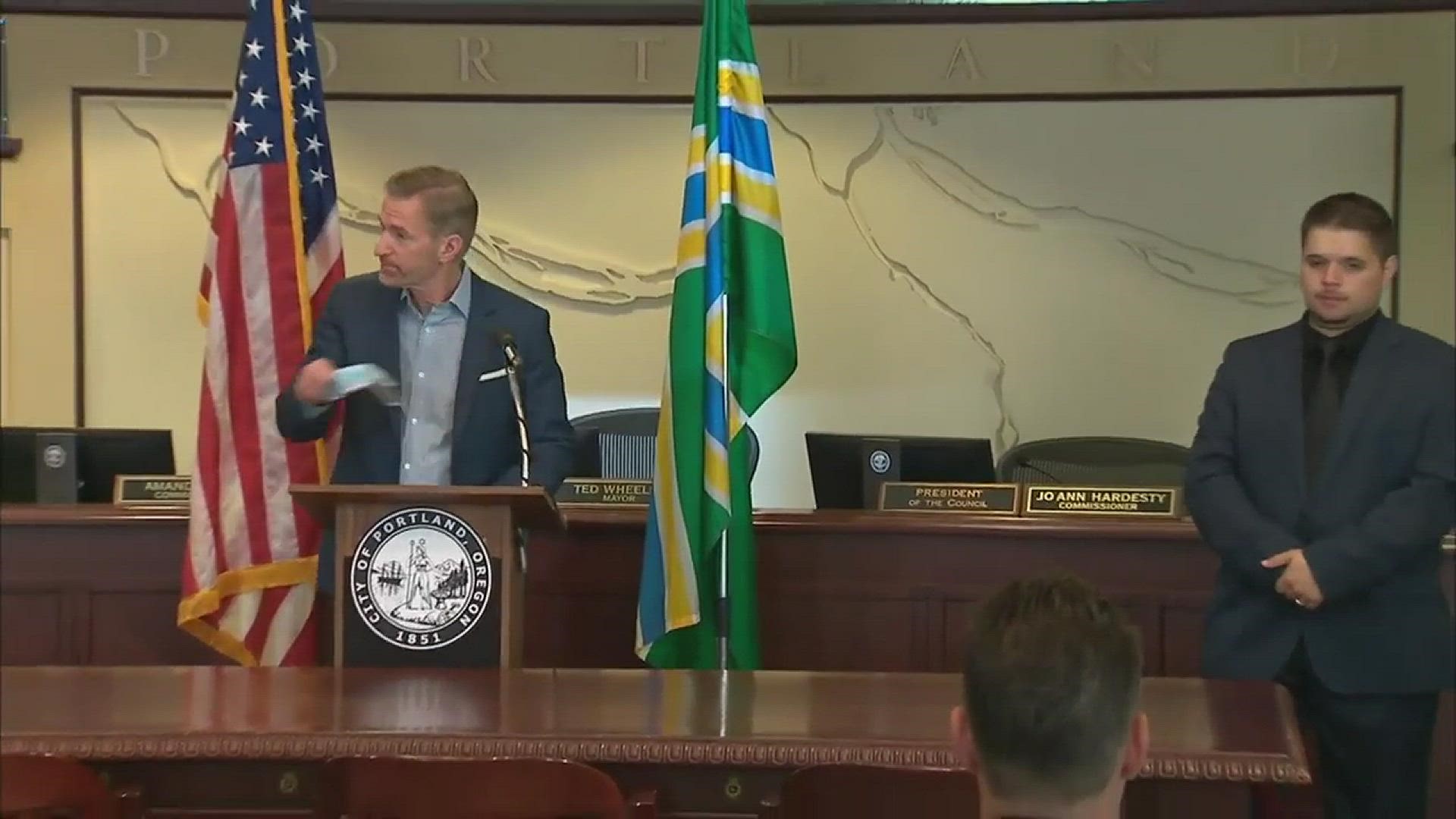 PORTLAND, Ore. — After three nights of unrest in downtown Portland, Mayor Ted Wheeler addressed the community Monday morning. He extended a curfew that's been in place since Friday and he reiterated U.S. Attorney Billy Williams' request for Gov. Kate Brown to activate the Oregon National Guard.

Governors in 23 states and the mayor in Washington D.C. have brought in National Guard troops to help with civil unrest, with about 17,000 active troops nationwide. Wheeler said he asked Gov. Brown three times on Sunday for National Guard help, and that she offered alternatives. He asked again on Monday.

When U.S. Attorney Williams was asked by a reporter during the Monday morning briefing whether activating the Oregon National Guard could exacerbate the situation, he said, "That's always a potential, but at some point you have to do the right thing and right now our law enforcement partners are in desperate harms way.

"Is there a risk? Yeah, there's a risk everyday and sometimes you just have to accept it and draw a line in the sand and do everything you can to support law enforcement."

"I agree with what the U.S. Attorney said: We do need more resources, more people. I want to be clear to those who serve in the National Guard, I respect the difference between the mission of the National Guard and local issues," he said. "If the National Guard is deployed, they'd protect facilities. Crowd control and policing will be left to law enforcement who are trained for that. The National Guard are our citizen soldiers. They're from here, live here."

On Sunday night, an estimated 6,000 protesters took to the streets in a peaceful demonstration. But at about 11:30 p.m. police said the protest had become an unlawful assembly and declared it a civil disturbance.

"Emotions are boiling over in the streets of America and in the streets of Portland," Mayor Wheeler said Monday morning. He said leaders are working as hard as they can to give protesters the right to assemble peacefully.

"They deserve to be heard. I am listening. Your police chief and fire chief are listening," he said. "But last night a small number of demonstrators provoked conflict.

"Those who demonstrated peacefully, I want to say thank you. I'm proud to stand with you," he said. "I do not believe violence or destruction is the answer to heal the deep racial wounds in America."

The mayor also said he looks forward to working alongside the phenomenal black leaders in Portland to find solutions to the inequities that have long targeted people of color. He said as long as the demonstrations continue, he will provide updates the following morning to let people know that Portland is a safe place.

"I've promised to keep creating space for black voices to be elevated and sacred," he said. "We will continue to create that space until we have lasting change."

He reiterated that there were a few moments that gave him hope, like the scene of police officers kneeling with protesters in downtown Portland.

Portland Police Deputy Chief Chris Davis said during the press conference that he saw people at their very worst, and at their very best.

"Our strategy was: Whatever happened, it would not be the police bureau that was the cause," he said. "We saw broken glass at the Justice Center, then after that protesters threw projectiles at officers and very large mortars."

"If you continue to demonstrate, do so peacefully," he said. "This is your home, this is our home. Help us move our community in a positive direction."

RELATED: Portland police chief: 'It's not about violence, it's about diplomacy'

"The destruction in our community must stop," he said. "I was personally there when our officers came under fire from projectiles, bottles and other items thrown at them. It was incredibly violent last night in front of the Justice Center at times."

He said police are actively looking for the people responsible for the damage at the Justice Center. Police have released photos of those suspects.

Wheeler said the curfew will be in place Monday night and will be reassessed on a day-by-day basis.