Steve Goodwin spent years composing music without recording it, but that music quickly started slipping from his memory when Alzheimer's kicked in. 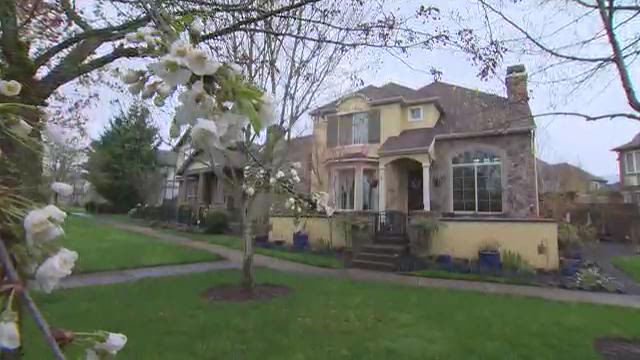 PORTLAND, Ore. -- Steve and Joni Goodwin love to spend time together gardening in their backyard in Wilsonville, Oregon.

Like their carefully tended flowers, their love has blossomed. It's something they've nurtured over decades.

"We've known each other since we were five or six," Joni said, as she tugged a weed out.

As Steve helped plant a flower, he said, "Her vitality, her heart, her mind, this is somebody I wanted to be with."

Steve composed music. He wrote Joni a song, "Sunshine And Love," when they were just 16.

"I thought anybody who could have that emotion that deep and pure would always take care of me and always love me," said Joni.

That was the first of dozens of songs Steve would write for Joni. A song for every occasion, every mood, every memory. In February, they will celebrate 50 years of marriage.

Steve's music has created a soundtrack of their unforgettable love story, but that story hit a snag several years ago.

Steve was diagnosed with early on-set Alzheimer's, and the music he wrote and used to know so well, is slipping through his fingers.

At the piano one afternoon, Steve groaned, as he stumbled on melodies he once played from memory nearly every day.

"Darn, see what I go through," he said, as he played a wrong note again.

He was fighting a fog in his brain.

"I could hear all the music in my head and heart, but I couldn't get my brain to connect to my fingers," he said. "That was frustrating. Then I realized I might be going down the same road my mother did."

Steve and Joni took care of his mother in her final years. They saw first-hand what lies ahead. Steve, 69, was diagnosed with early on-set Alzheimer's.

"It was devastating," said Steve.

He had to quit his job as a software designer. The disease was stealing his memory -- and his songs.

He never thought they were good enough to share and he never wrote most of them down.

"I never thought I'd have to worry about them going away," he said.

Music he composed for his daughters, and played them nightly as lullabies, was slowly fading away.

"It hit me like a tidal wave that not only would I be losing my daddy, but the soundtrack of my childhood," said his daughter, Melissa Goodwin.

Help from a friend

And for Joni, Alzheimer's was taking part of the soul of the man she loves.

"I felt we were going to lose not just my best friend, but his music," said Joni.

Steve's family was heartbroken, until Melissa confided in her good friend, Naomi LaViolette, who happened to be a professional pianist with perfect pitch.

"I said, maybe if he could play the songs for me, I could learn them. We could record them. I didn't know if it would work, I wanted to try and help her. She was just so sad," said Naomi.

Credit: KGW News
Naomi LaViolette and Steve working together to recreate some of his original songs.

Quickly, despair turned to hope. With her talent to learn a song by listening to it, Naomi sat patiently with Steve at the piano. He'd never played for anyone outside his family.

"To put together the pieces in his compositions and discover how well-crafted they were, that was a real gift to me," Naomi said.

Over three years of listening, playing and recording, Naomi slowly pieced together melodies lost in Steve's mind and rescued them.

"It's like she crawled up into my musical brain and unlocked what was there. I'd hear the chord. That's it. At that moment, I realized a miracle was happening," said Steve.

"It's inconceivable what Naomi did," she said.

"His music, his heart will always be with me. It says to me, I'm right here with you, honey," said Joni.

A few months ago, family, friends and strangers who heard about the project to save Steve's music gathered at the Old Church in Portland for a concert. Steve greeted them at the door.

"I'm excited. We are going to have fun. It's not going to be a pity party by any means," Steve said as he hugged an old friend.

"It means the world to us you are here. Our dad, Steve Goodwin, has early on-set Alzheimer's,” they said. “About 5 years ago, we realized he was losing the ability to play his music. So, we launched a rescue mission. We've invited you to hear a new album we've created and celebrate Saving His Music."

When Steve Goodwin took the stage, the fog in his brain lifted.

He became a showman. He confidently played "Black Moon," a song he plays only on the black keys, and combines gospel music he loved as a child. 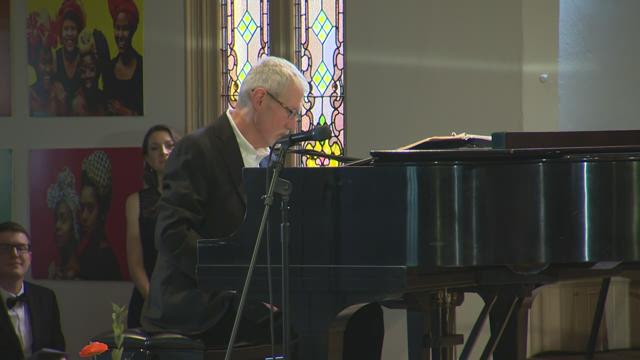 The music he never dared to share brought the audience to its feet for a long standing ovation.

For the songs Steve can't remember how to play, most of them these days, Naomi skillfully and tenderly brought back to life. 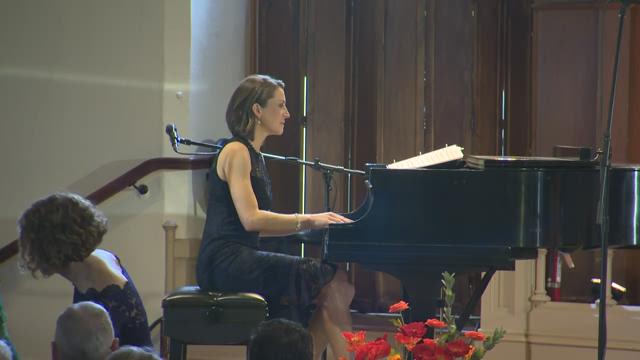 Naomi explains how she helped stitch together Steve's songs: 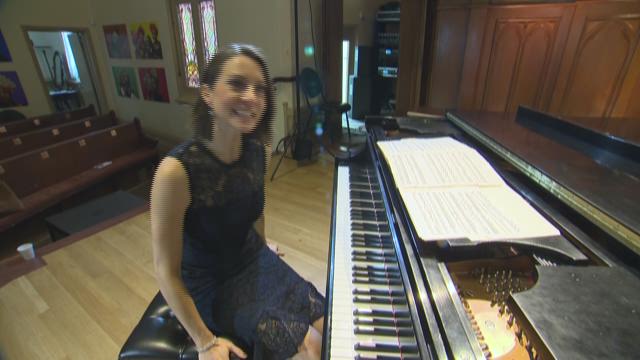 As she introduced one of Steve's songs, she told the audience, "The Goodwins are some of the most positive people I know. Taking Steve's music into my own heart and fingers has been a true gift. And I get to understand more about what true love is when I play his music. This is 'Heart of Your Love.'"

As they listened, several people in the audience wiped tears from their eyes. But perhaps the most amazing part of the journey is what has happened to Steve's brain. Once the music was saved, he wasn't worried anymore about trying to remember it.

And Steve was able to create again. Even though he frequently can't remember what day it is, or do simple math. Somehow, with Naomi's help, he's writing new compositions, like "Melancholy Flower."

Naomi wrote the lyrics and a choral score the Oregon Repertory Singers recorded, and also played at the concert.

Here are the lyrics to "Melancholy Flower:"

Out on the prairie, wild and free, a lonely flower tries to sing.
It’s hidden music in petals of gold. Melancholy flower, lovely soul.
Dark clouds fall on the flower. Misty fog blocks the sunlight.
Lost and blinded in shadow. Golden colors fade from sight.
Hold on flower- your roots are strong.
If you sing out, you won’t be alone.
Sing, flower, sing!
Through the shadows, wild and free,
Now many flowers are blossoming.
The prairie is full of singing as the wind blows in waves of gold.
The flower is known. The flower is known.

As she listened to the song that metaphorically describes Steve's journey with Alzheimer's, a friend said, "It's such a blessing, I love it. Just listen to this. It's beautiful. With both of them co-creating. It will live forever. And we will get to enjoy it forever."

The song has also been recorded on the Oregon Repertory Singers' CD, released last year.

And Joni will be forever grateful for the support of family and friends, and most especially for Naomi.

"Because of Naomi, those pieces of Steve's soul will always be with me. I'm never going to be alone," she said.

"We are incredibly grateful for this amazing, amazing Naomi," Steve said.

Santa Barbara Publishing will release "Melancholy Flower" for other choirs to sing. And a Hollywood screenwriter is working with the Goodwins on a feature length film about their journey.

Steve and Naomi are also frequent guest speakers on "Music and the Aging Brain," hosted by Science On Tap.

Their story has grown wings.

And when time takes its toll, and Alzheimer's steals what it will. The songs will remember when. And like the flowers in Steve and Joni's garden, their love will bloom again.

The Oregon and SW Washington chapter of the Alzheimer’s Association