Native Americans in Oregon cheer the change and hope it spurs more understanding of native cultures and history. Oregon is the 11th state to do so. 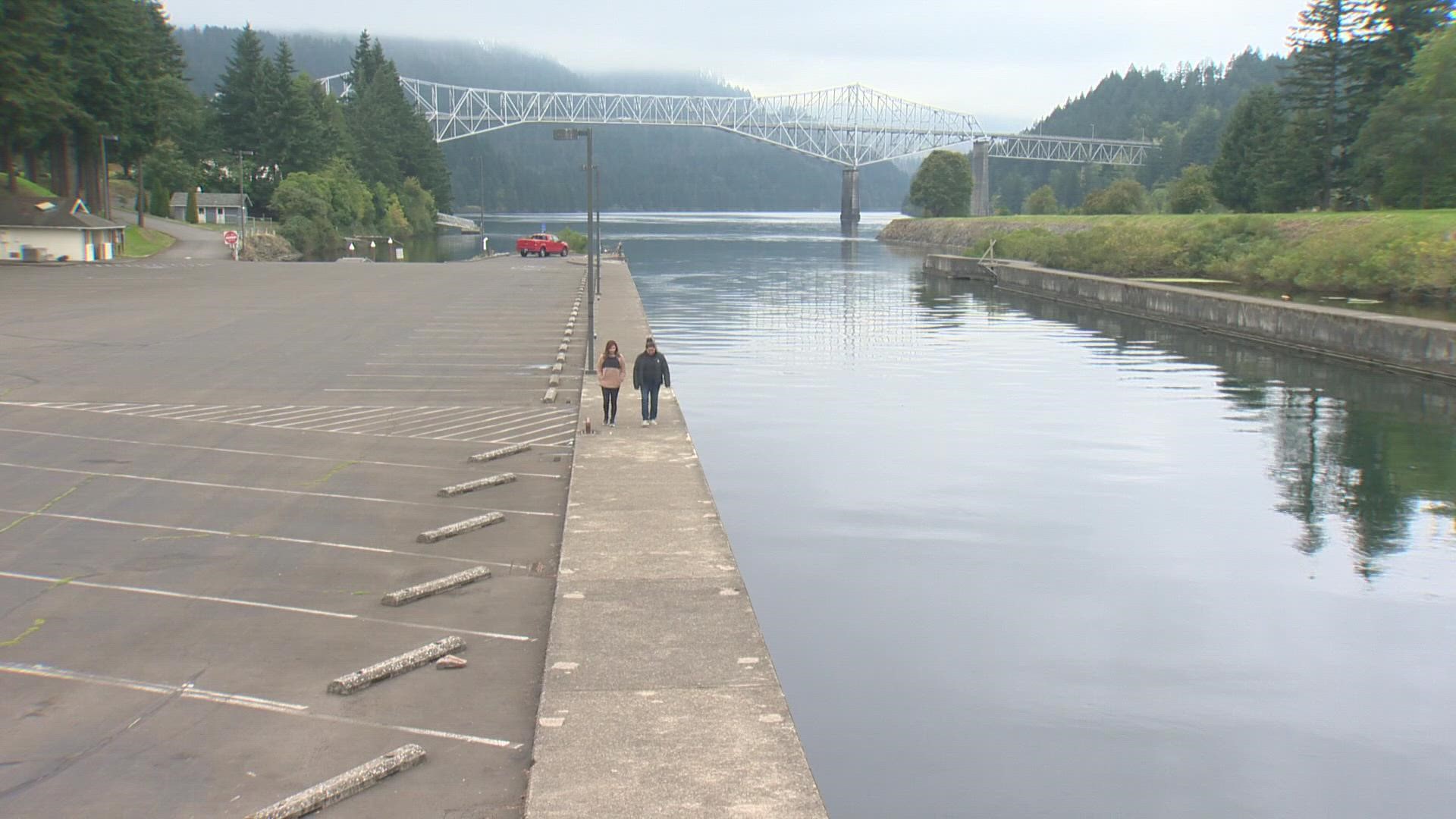 CASCADE LOCKS, Ore. — On your desk calendar, it might list the second Monday in October as Columbus Day. But this year, Oregon lawmakers voted to make Oregon the 11th state to officially change the holiday going forward to Indigenous Peoples Day. While the state recognizes it, the day has never been an official holiday with days off, although federally it does mean there's no mail service on this day.

Nevertheless, the hope is the name change will bring important awareness, and generations of native families are hoping it leads to understanding. Especially Terri Brigham Price, who is part Cayuse, part Walla Walla Indian.

"I enjoy what I do for sure," she said. Her family is well known for fishing the Columbia River in the Gorge.

"You work, and you know you worked," she said.

KGW first met her in 2015 during the fall salmon run. The work involves grueling 18-hour days filled with cuts and bruises, dangerous weather and little sleep. Of course, everything used to be harder. At Celilo Falls before the 1950s, generations of Native Americans fished with hoop nets, on wooden platforms above the raging waters. But Celilo Falls is deep underwater now. Construction of The Dalles dam flooded it in 1957.

Now the only scaffolds Brigham's family fish from are four wooden ones her grandfather built in the 1960s at Marine Park in Cascade Locks.

"Early June is the best time to come down here and fish," Brigham Price said.

Brigham's family is one of very few to have a brick and mortar market to sell their catch. The Brigham Fish Market is located at 681 Wa Na Pa St. right next to the Bridge of the Gods in Cascade Locks. Their family photos line the walls inside. There are black and white photos of Terrie and her sister as kids on the fishing boat, her mom, Kat Brigham, hauling in giant sturgeon, and other fascinating photos of her dad and uncles.

Oregon is home to nine federally recognized Indian tribes. Seven of them have designated reservation land. The treaties they were forced to sign all came in the 1850s. But it took until now, 2021, for Indigenous Peoples Day to replace Christopher Columbus.

"Well, first of all, [Columbus] was lost," Terrie said. "He didn't discover anything and he was a monster, you know, and it's that, to me, that just goes along with how little is taught of other cultures and other people in the school system.

"I think it's good that it's happened (the holiday's name change). I do think some people are taking it too far. Like you can't erase and forget, which is what they were doing to us, but you have to acknowledge and remember all the good and the bad or otherwise, you're bound to repeat it. And that would be an awful thing in history to repeat. So it's a step."

How should people or kids in school, celebrate Indigenous Peoples Day?

"Dig a little deeper. We're always willing to teach people what we believe in our traditions. If they genuinely want to learn," Terrie said. I'd rather have the understanding of our people so that when they'll look at a darker skinned person, they're not automatically saying 'Oh, what are they taking from us?' We've been here. We reserve hunting and fishing rights. We reserve our first food rights. They weren't given to us. We didn't take them. That's something we've always had. And having a little more understanding for that, I think will go a long way."

Here are some community events going on around Oregon to celebrate the new holiday:

Terrie Brigham Price and her mother Kat Brigham, who serves as the Board of Trustees Chairwoman for the Confederated Tribes of Umatilla, both appeared in an episode of Top Chef Portland that focused on Native American traditions of food and cooking in Oregon. Brigham says she's had several customers at the fish market recognize her from the show and ask questions and buy fish. She says that notoriety will only help the cause as well as Indigenous Peoples Day.

Our KGW series called 'Oregon in Season' is focused on the Gorge in the month of October. With Chef Sara Hauman, a fan favorite contestant on the show, teaming up with Brigham to make a special salmon dish that customers at Brigham Fish Market can order on special all this week! If you'd like to make the dish yourself, the recipe is below.

Chef Sara and Terrie Brigham made make it live on KGW News at Sunrise on Monday, Oct. 11. Watch the video below. 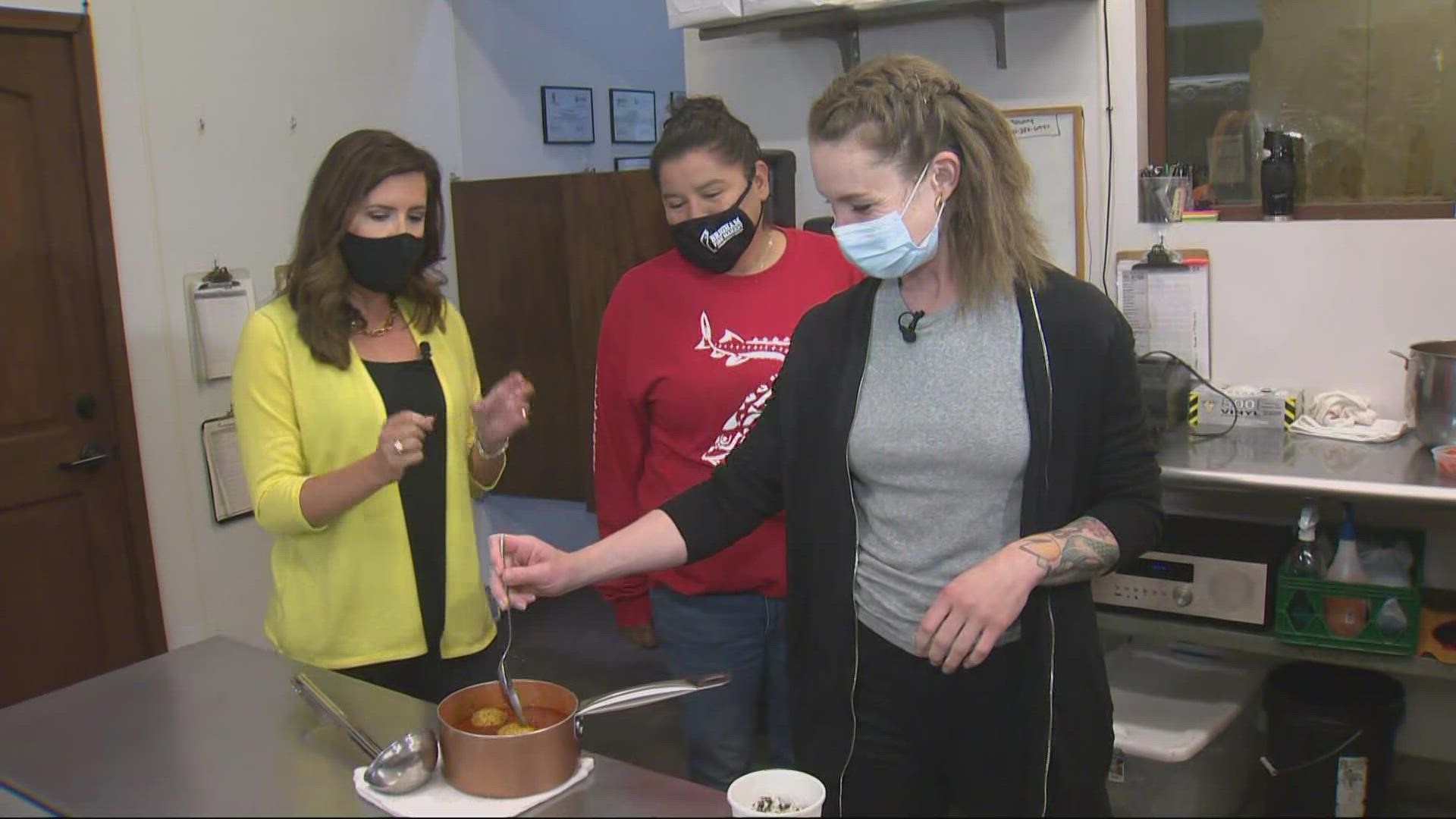 In a saute pan, heat the grapeseed oil and add the celery, onion and garlic.  Cook on medium heat until translucent and soft.  Cool the mixture down.

In a food processor, add the salmon meat, cilantro, cooled vegetable mix, cumin, coriander, eggs, panko, salt and chili flake.  Pulse the mixture in 15 second intervals, scraping down the sides of the food processor bowl in between pulsing, until the mixture begins to ball up and all the ingredients are evenly distributed. Cool the mixture thoroughly.

Once cool, roll the mixture into golf ball sized meatballs.  If the salmon mixture begins to stick to your hands, dip your hands in cold water between forming each meatball.

Place all the ingredients into a large pot and cover the bones with cold water. Bring the pot to a boil and then lower to a simmer.  Skim the gray or white foam that will begin to gather at the top of the broth.  Continue to simmer and skim as needed until the contents have reduced to 1 quart and then strain through a fine mesh sieve.

Transfer the broth to a small pot and add chopped tomatoes, coconut milk and fish sauce.  Continue to simmer the broth for 15-20 minutes then add meatballs.

Place all ingredients in a rice cooker and steam on the white rice setting.

Simmer the salmon meatballs in the coconut-tomato broth for 8-10 minutes. Spoon the meatballs and as much broth as desired over the rice and wild rice mixture. Garnish the dish with freshly sliced scallions, cilantro and toasted coconut flakes.