'We have a very healthy elk population': Idaho Fish & Game responds to concerns about elk slaughter in Magic Valley

IDFG officials said 206 elk were killed as part of a research project to prevent elk from damaging private property and crops. 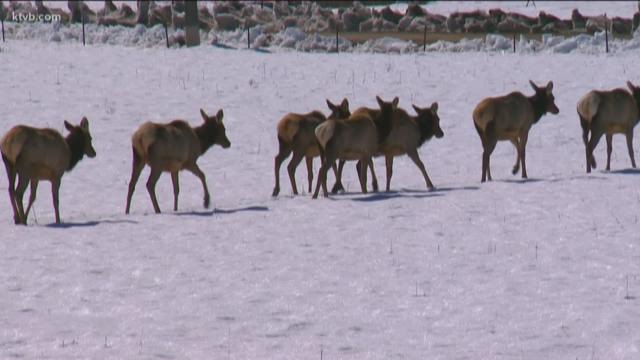 With hundreds of comments and more than a thousand shares, the post has sparked some outrage with many questioning why Fish and Game would kill the elk. Others wondered if the post was true.

Terry Thompson, communications manager for Fish and Game Magic Valley region, tells KTVB that elk were killed but the number was actually 206 not 172.

According to Thompson, the elk were killed as part of a research project with a graduate student from the University of Idaho.

“Fish and Game is mandated by state law to work with land owners if there’s a situation where wildlife is going onto private property and damaging crops," Thompson said. "That law specifically says we would work with landowners to help avoid depredation problems."

If depredation can't be avoided, the state is responsible for compensation for damages done by wildlife.

Fish and Game has received a lot of calls about the post. Thompson said one issue with it is that it makes it seem like all the elk were killed in one mass slaughter.

That is not true, officials said. As part of the project, the elk were killed between July and October and never in mass numbers.

“There were nights when we got zero – we didn’t kill any elk," Thompson said. "The most we ever killed in one night was six.”

Those 206 elk were not taken from one specific area either. Fish and Game said they came from five different game management units, spanning from Weiser to Picabo to Minidoka.

Many commented on the social media post, asking about the meat and if it was wasted.

Thompson said the picture on the post is misleading and proper procedures to preserve the meat were followed.

“Each of those elk was field dressed, immediately put into a refrigerated trailer and then transported to Scarrow Meats in Jerome,” he said.

The meat then went to Idaho Hunters Feeding the Hungry, which distributed it to food banks across Southern Idaho.

While Thompson said he doesn't want to minimize the 206 taken elk, the number doesn't hurt the overall population. In fact, it helps with population control and management of elk numbers.

“Right now in the Magic Valley region, we have a very healthy elk population. Estimates are 15,000 to 20,000 elk,” he said. “We actually have more elk than we want to as defined by the elk management plan.”

Other methods for keeping elk off private property that were addressed in the research included spraying crops with a repellent that is unharmful to elk but tastes bad. Another method involved using dogs to scare elk away from getting into corn crops.

Thompson said anyone with questions or who sees a similar post is always welcome to call Fish and Game and ask about it.

RELATED: 'Every day was a new adventure with her': Valley County man reacts to mountain lion attack that killed his dog