The 11 Republican senators who walked out over the cap-and-trade bill faced a $500 fine for each day of the walkout. 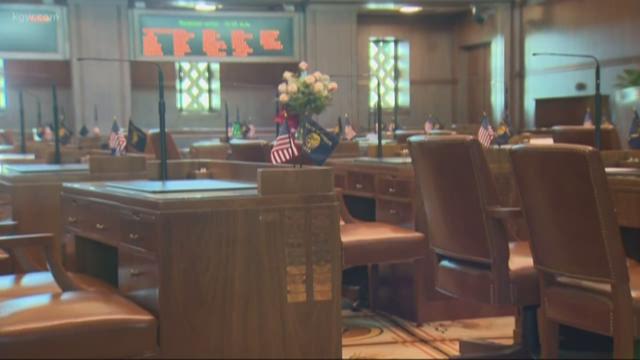 Editor's note: Video is from June 29, 2019, when Republicans returned to the Senate after the cap-and-trade bill was dead.

SALEM, Ore. -- Oregon Senate Democrats on Friday said they will not collect the fines from the 11 Republican state senators who walked out in opposition of a sweeping climate plan earlier this summer.

Democrats said the fines would have been fought in court, which would have racked up legal fees of hundreds of thousands of taxpayer dollars.

Instead, Democrats will focus on efforts they hope will prevent potential future walkouts from halting the work of the legislature. According to a press release, Senate Majority Leader Ginny Burdick (D-Portland) will introduce a constitutional amendment during the 2020 session that would change the state’s definition of a quorum from two-thirds attendance to a simple majority. The amendment would ultimately be sent to voters in the 2020 election.

“Stopping the work of the people by denying a quorum is unconscionable and undemocratic. Senate Democrats will work to protect Oregon’s democracy by giving Oregonians and their representatives more tools to stop any future quorum denials,” Burdick said. “I hope our Republican colleagues now see that this is not a tactic that should ever be used again, and that they will work with us to prevent either party from walking off the job.”

RELATED: Walkouts in Oregon politics are rare but not unprecedented

Senate Republicans walked out twice during the 2019 legislative session to prevent a quorum, preventing action from being taken on bills they believed would have passed due to the supermajority Democrats had in both the state Senate and House of Representatives.

The first walkout took place in May over a school-funding business tax bill. Republicans returned after Democrats agreed to scrap bills on gun control and vaccines, and the education business tax plan was approved and has since been signed into law.

The second walkout occurred in June over a climate plan that became known as the cap-and-trade bill. The bill would have aimed to reduce fossil fuel emissions through a cap on carbon.

Republicans, arguing the bill would kill jobs in their rural communities, walked out and fled the state after Gov. Brown ordered the state police to find them. During the walkout, the Republican senators faced a $500 fine each day they did not show up the Capitol. They returned to Salem after receiving assurances that the bill was dead.