The closure comes at the peak of wheat harvest and could be devastating for farmers who ship to Asia via barges that fill up at more than two dozen grain elevators.

PORTLAND, Oregon — A critical navigation lock at the mighty Bonneville Dam on the Columbia River has shut down because of cracked concrete, meaning huge barges that transport millions of tons of wheat, wood and other goods from the inland Pacific Northwest to the Pacific Ocean for export are at a standstill.

The closure comes at the peak of wheat harvest and could be devastating for farmers who ship to Asia via barges that fill up at more than two dozen grain elevators along the river network as far inland as Lewiston, Idaho.

Many of those barges are now stranded above the dam, unable to reach deep water export terminals on the Pacific Ocean.

“All the growers have done their part, they’ve raised high quality wheat and they want to get it out to feed the world,” said Kristin Meira, executive director of the Pacific Northwest Waterways Association.

The crack in the concrete sill was discovered late last week and the lock was drained of all water over the weekend. On Monday, crews were working to demolish the faulty concrete section so repairs could begin, said Chris Gaylord, a spokesman for the U.S. Army Corps of Engineers in Portland, Oregon.

It was unclear when the repairs would be done.

It’s not known what caused the damage; the locks are maintained annually.

The damage means that barges headed upstream can’t travel the Columbia River past the Bonneville Dam and those headed downriver toward the Pacific Ocean are stuck behind the Bonneville — effectively putting a chokehold on all river commerce in a huge swath of the Pacific Northwest from eastern Oregon and Washington to Idaho.

The eight dams on the Columbia and Snake rivers are critical parts of a watery highway that transports millions of tons of cargo for shipment to and from the Pacific Rim via large, deepwater ports on the coasts of Oregon and Washington.

The first of these dams is the Bonneville Dam, located about 40 miles (64 kilometers) northeast of Portland, Oregon.

Eight million tons of cargo move inland on the Columbia and Snake rivers each year and 53% of U.S. wheat exports were transported on the Columbia River in 2017, the latest year available, she said.

About $2 billion in commercial cargo travels the entire system annually, according to the U.S. Army Corps of Engineers, and it’s the No. 1 export gate in the U.S. for wheat and barley and the No. 2 export gate for corn.

Navigation locks allow the large barges to pass through the massive concrete dams that were built across the Columbia and Snake rivers decades ago to generate hydroelectricity for the U.S. West.

A boat enters a sealed chamber filled with water — essentially like a giant concrete bathtub — and then the water level is lowered or raised to match the level of the river on the other side of the dam. Then the lock opens on the other side and the boat exits.

The cracked concrete is on the downstream lock gate, but the damage was causing significant leaking in the whole system — so much so that water levels were falling when the lock was in operation, said Gaylord, the Army Corps spokesman.

The dams close each year for a week for maintenance and once every five to six years, they close for several months, said Rob Rich, vice president of marine services for Shaver Transportation. But in those instances, farmers and shippers and barge companies have two years of notice, allowing them to plan ahead, he said.

Rich said half of his company’s business comes from barges that tow cargo on the river system above the Bonneville Dam and he is anxiously awaiting more information about when the lock will be repaired.

Rail and trucking aren’t reliable alternatives; most of the rail system is used for grain coming from the Midwest, he said.

“I’ve been working on this system for 40 years and I can count on my hand the number of times that we had emergency outages, where we didn’t know this was going to happen,” Rich said. “It has a major impact.” 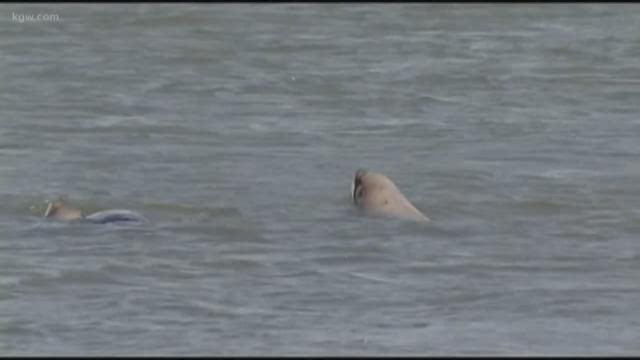