Since August 2018, someone has been intentionally misplacing books around the library with the apparent hope of making the titles unavailable to readers. 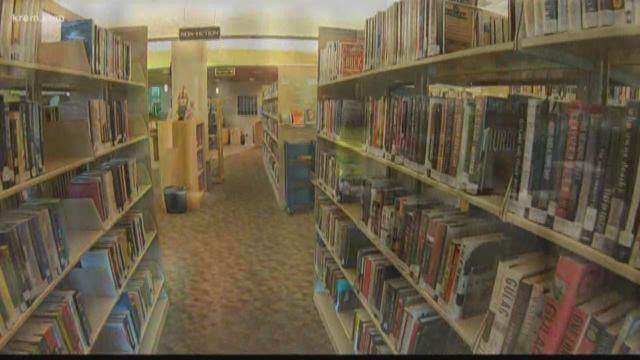 COEUR D'ALENE, Idaho — Attention surrounding a unique book-hiding patron of the Coeur d'Alene Library doesn't appear to be slowing down. At the same time, the unidentified miscreant hasn't stopped either.

Since August 2018, someone has been intentionally misplacing books around the library with the apparent hope of making the titles unavailable to readers. The hidden books are mostly non-fiction works that are critical of President Trump, according to library director Bette Ammon. Other titles included books about feminism and LGBTQ topics.

After KREM first reported on the incidents last September, word of the Coeur d'Alene Library's situation has prompted donations and has reached readers and librarians across the United States. The New York Times has since interviewed Ammon on the matter, the librarian said.

RELATED: Someone keeps hiding books critical of President Trump at the Cd'A Library

“It’s just such an unusual kind of thing," said Ammon of the problem which doesn't appear to be ending.

Just this week, staff noticed a book on the Second Amendment was missing.

The library had previously received an anonymous comment from the book-hider who remarked on a "large volume of books attacking our President" at the library. The patron vowed to continue hiding the titles to "keep this propaganda out of the hands of young minds," according to a submitted comment.

The tactic hasn't been entirely effective, it appears.

On Thursday, Ammon said that the library received a $50 donation to go toward purchasing replacement copies of the books that were being hidden.

Roughly a dozen books have been donated to the library from people who were troubled by the book-hider's attempt at censorship. In one instance, a couple from New Mexico mailed the library five books on LGBTQ topics from their personal library. The couple mentioned they thought the library “could use some other books on alternative issues,” said Ammon, paraphrasing a note from them.

Ammon added that a library director in New York State heard of the story and reached out to her. “He emailed me and said ‘This happened in my library. I commiserate with you,’" said Ammon. "I got an email from the Billings public library director. He was outraged.”

The situation also caught the attention of the author of one of the books targeted by the unknown critic.

That book, titled "Commander in Cheat: How Golf Explains Trump," was penned by Rick Reilly, a former feature writer and columnist for Sports Illustrated. According to Ammon, Reilly's publisher reached out to the library to share that the author was hoping to travel to Coeur d'Alene to speak about his book.

Ammon accepted the offer. Reilly is set to speak about "Commander in Cheat" on Thursday, November 21 at 7 p.m.

“He’s planning to hide 10 autographed copies of his books throughout the library," said Ammon, hinting at Reilly's apparent sense of humor. "He says maybe one in the mental health section and one in true crime.”

Ammon had previously told KREM that the issue was bigger than politics and is inappropriate no matter what type of subject or political viewpoint was discussed between the pages.

“It would be the same problem," she said. "Anybody who takes away the opportunity to read from someone else, whether they steal a book, check it out and don’t return it, or hide it. They’re destroying somebody else’s right to read.”

RELATED: Publisher of 'A Warning' by Trump official gets DOJ warning