Monday, Senator Mike Crapo unveiled his plan to fix problems in the Choice Program for veterans. 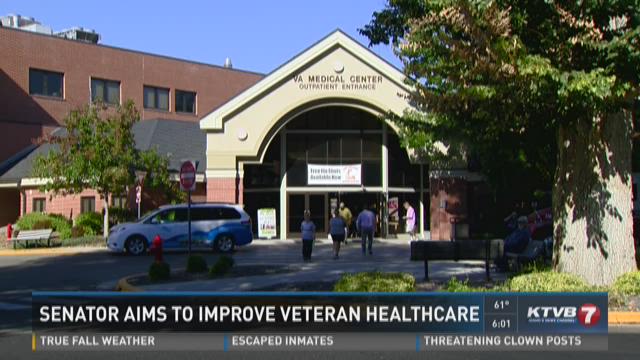 After a scandal in 2014 involving long wait times for veterans at the VA, the government created something called the Choice Program.

It allows vets to visit private care facilities when the waitlist is too long or the VA is too far away.

The program also has its share of problems, which is why Sen. Mike Crapo unveiled a new plan Monday called the Improving Veterans Care in the Community Act.

"Having to struggle when you come home is not fair to the veterans. We have to struggle in everyday life on top of all other things, it shouldn't be health care," said veteran Danny Pugmire.

Pugmire knows all too well the problems with the health care system.

He was fighting for his life waiting to see a doctor after his esophagus separated from his stomach.

"It caused me to bleed inside and outside, so I was throwing up blood on top of passing blood," said Pugmire.

Pugmire personally called Sen. Crapo's office after the VA was taking too long to get him to a doctor through the Choice Program.

"We shouldn't have to call a senator to get help," said Pugmire.

After hearing the same concern among other veterans, the senator rolled out his "Care in the Community Act.''

It's a plan that Crapo says takes the place of eight different Choice Programs in the VA and consolidates into one effective program, designed to create less hassle for vets and community health centers.

"One problem that veterans identified to me was that the bureaucracy of trying to find the pathway through this system, that probably only the federal government could've dreamed up, of having eight different paths often inconsistent with each other and confusing, is one that we are cutting through and resolving," said Crapo.

In addition, Crapo says his bill would expand eligibility for veterans to seek local treatment if their VA is too far away.

"Veterans live where veterans live and we don't have VA facilities all over the country for them. So they need an opportunity to go get medical care wherever they can get it," said retired naval officer Richard McPherson.

Finally, the measure would provide oversight of veteran services and would be reported directly to Congress.

"It's not going to fix the system, but it's going to make it so much better for us," said Pugmire.