Oregon mother may be deported while son fights for his life

She has been going through the legal steps to become a citizen for the past decade but now has 33 days to leave. 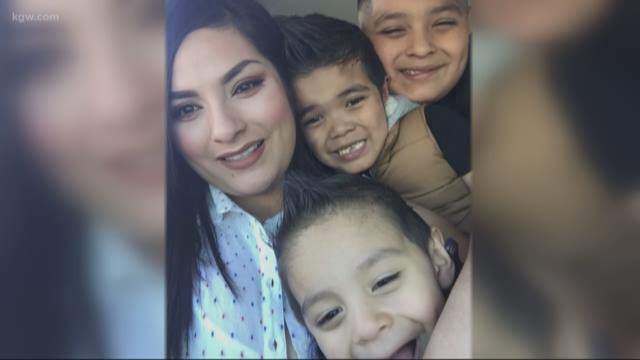 An Oregon mother may be forced to leave the U.S. as her son fights for his life. He has a kidney disorder and needs a transplant.

Last week 29-year-old Yisel Salazar learned she could be deported to Mexico, despite previously having legal status to live in the United States.

Now, she is dealing with a lot of uncertainty. Salazar’s 5-year-old son Anthony is battling a kidney disorder that has him on dialysis 12 hours a day.

“So, if anything would happen or anything there's nobody to watch my kids,” Salazar said. “So, where will my son go? That's my main concern.”

She received a letter last week from U.S. Citizen and Immigration Services saying she has to leave the country in 33 days. It says the federal government will no longer consider her requests to stay in the United States and she must leave or face deportation.

“She’s in limbo and she needs her work permit to be able to take care of her family,” Salazar’s immigration attorney Dan Larsson said.

Salazar was a child in 2001 when she came to the United States with her mother. Up until recently, she had been allowed to stay while she undertook the long process of getting permanent legal status.

For years she has been allowed to live in the United States under deferred action, but last week’s letter stated her renewal for that status had been denied.

A policy change made earlier this month essentially ended deferred action requests in cases like Salazar’s, according to Larsson.

“They just said, nope we're going to enforce immigration laws. We're going to terminate deferred action for everybody except for military, people who are in the military, and their family members. And basically, it's just another, alleged, attempt to be tough of immigration,” Larsson said.

Salazar says she has been going through the legal steps to become a citizen for the past decade, which has been full of hurdles and red tape, but she is trying to do the right thing.

“There are people who are trying to do the right thing. And things just don’t work out the way that they should. I’ve been in this process for more than 10 years. I’ve been fighting my case, I’ve been paying every year to get all my legal statuses – every single year before expiration day. And it’s just not fair, I’ve been doing everything that they ask for,” Salazar said.

Her biggest worry now: who will care for Anthony and her two other sons if she is forced to leave the country, which is also where her boys were born.

“As a mother, my main concern is my kids. And I would do anything for them,” she said.

Because of her son's insurance Salazar needs legal status to continue Anthony's care.

She is entering deportation proceedings where she can argue for her legal status to be renewed. While Larsson says she has a strong case, Salazar may still be rejected.

For now, Salazar and her young son who needs a new kidney are left in limbo.