Mike Simpson and Bruce Newcomb penned a letter in support of the governor's authority to make emergency declarations. 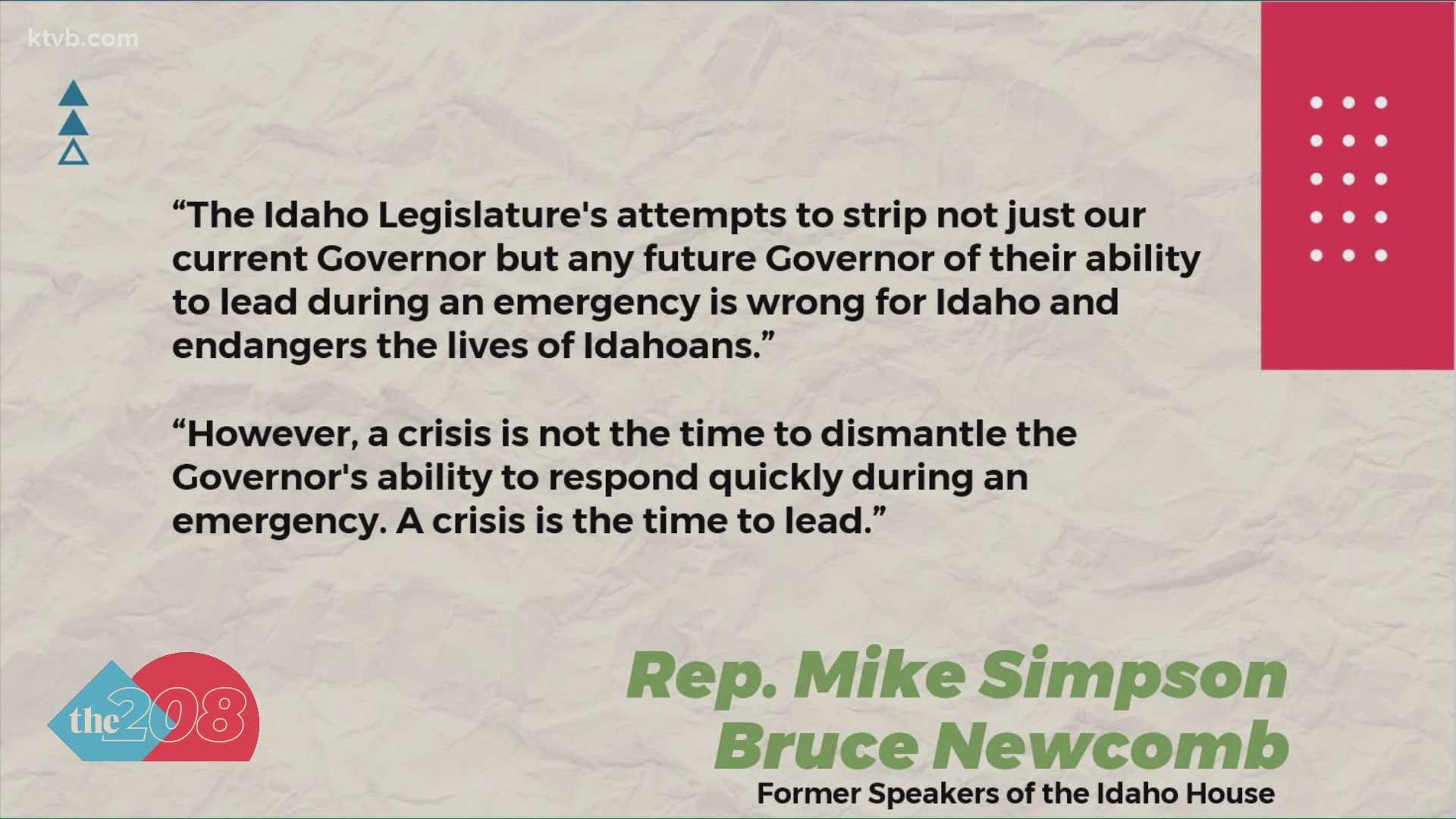 BOISE, Idaho — Mike Simpson and Bruce Newcomb know a thing or two about trying to build consensus in the Republican Party. Both men served as speakers of the Idaho House of Representatives for multiple terms.

Simpson served as House Speaker from 1992-98, and was then elected to Congress to serve as representative for Idaho's Second Congressional District. He easily won a 12th term in Congress last November.

Newcomb, succeeded Simpson as House Speaker and served eight years in the position.

The two men have penned an open letter to the Idaho Legislature criticizing Republican lawmakers for trying to undermine the governor's authority during a time of emergency, saying it will weaken Idaho's response in future emergencies and put this generation and future ones at risk.

This comes as a concurrent resolution is making its way through the Statehouse that would the end the coronavirus emergency declaration originally made by Gov. Brad Little on March 13. The governor lifted most of the restrictions over the summer as he sought to reopen the economy.

But infections and deaths increased in the fall, and Little reinstated some restrictions. There is a currently a limit of 10 people or less during public and private gatherings, though it doesn’t apply to religious or political gatherings.

Lawmakers said the pandemic revealed that too much power is concentrated in the governor’s office during declared emergencies.

Here is the full text of Simpson and Newcomb's letter to the Idaho Legislature:

"The Idaho Legislature's attempts to strip not just our current Governor but any future Governor of their ability to lead during an emergency is wrong for Idaho and endangers the lives of Idahoans.

"We both held the position of Speaker of the Idaho House of Representatives. We understand the constant disagreement that occurs between members of the Legislature and especially between members of the same political party. We understand the disagreement that occurs between the legislative and executive branches.

"However, a crisis is not the time to dismantle the Governor's ability to respond quickly during an emergency. A crisis is the time to lead.

"The Idaho Legislature's reckless and careless attempts to end the COVID-19 emergency declaration and weaken Idaho's response in future emergencies puts this generation and future generations of Idahoans at risk.

"Emergency declarations are very common. At its core, an emergency declaration allows states and local communities to access federal assistance – our taxpayer dollars – in the event of a crisis. Sometimes those crises and their aftermath last a few weeks and sometimes they last months or years, as in the event of a devastating flood, earthquake, landslide - or a pandemic.

"The COVID-19 emergency declarations are wholly separate from the public health orders that limited certain activities to protect lives and prevent our hospitals from being overrun with patients all at once.

"In the immediate days and weeks ahead, ending the COVID-19 emergency declaration would slow down the vaccine rollout. Hospitals would lose access to critical equipment and staffing resources. It would jeopardize the state's ability to tap the Idaho National Guard to assist with vaccine administration, testing, and support for foodbanks and medical facilities. Financial support for small businesses would end. It would burden local communities – the entities that requested the emergency declaration to begin with. It would limit the state's ability to remove regulatory barriers that stand in the way of better healthcare access for our citizens.

"But Idahoans also need to know that the Legislature's actions today would limit the state's ability to quickly and decisively respond during potential future emergencies in their backyards, such as a flood, landslide, earthquake, or other natural disaster. Take for example the extraordinary flooding caused by rapid snowmelt and heavy rains in 2017. Residents of 33 counties will remember both the perilous conditions that endangered lives and property and also the swift action taken by Governor Otter to activate state and federal resources to come to their aid. The flooding occurred over a period of months, and the emergency declarations, resulting from these major natural disasters remain in effect today because of their longstanding impacts.

"The Governor needs to make decisions quickly during an emergency. That is one of the proper roles of the executive. The emergency declaration is the Governor's main tool to act quickly and save lives during a crisis. Days and even hours make the difference in a life and death situation. Fires, floods, and earthquakes wait for no one. Only executive-speed decision-making can get families the immediate help they need in an emergency.

"Idaho has the strongest economy of any state in the nation. We are leading states in the financial solvency of our state budget. That didn't happen by accident. Quick action during the pandemic, combined with years of fiscal conservatism demonstrated by the Legislature and Governor, have positioned Idaho for continued strength.

"We urge the Idaho Legislature to end the political jockeying and untruths about emergency declarations and do what is right for the people of Idaho and our state's economy. Take a step back and think this through. The safety and prosperity of this generation and future generations of Idahoans depend on you."