Risch was answering questions at a business roundtable event in Nampa, when the reporter began asking about President Trump's recent comments on Ukraine and China. 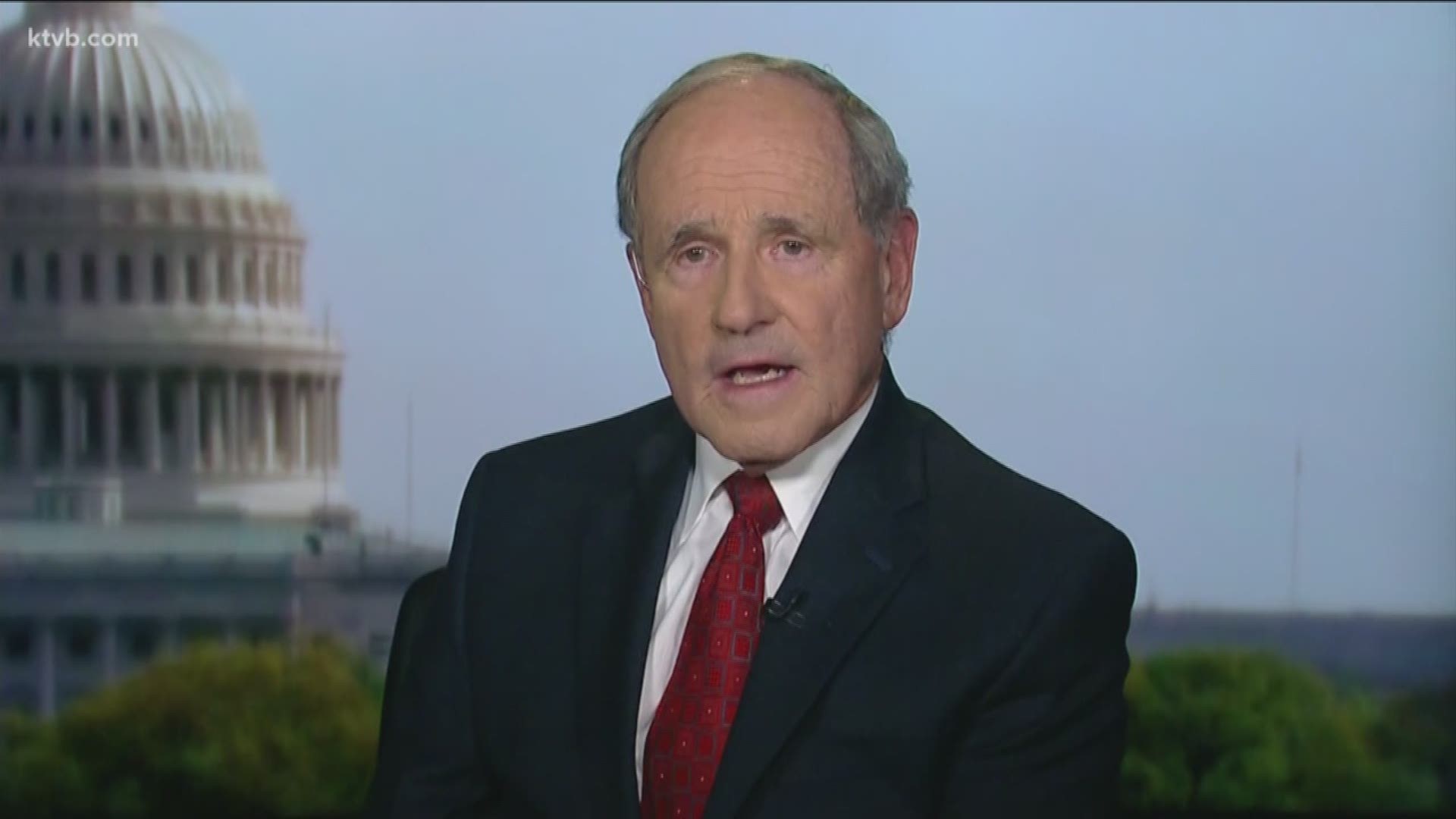 BOISE, Idaho — The Ukraine scandal continues to surround the White House, and this week, Sen. Jim Risch (R-Idaho) walked out of an interview with a reporter after being asked about President Trump's involvement in the incident.

Risch was taking part in a business roundtable event in Nampa on Wednesday when a reporter with Boise State Public Radio asked about the president's recent comments, in which he suggested that China should investigate Democratic presidential candidate Joe Biden.

"As the chairman of the Senate Foreign Relations Committee, do you think it’s appropriate that the president asked?” Heath Druzin asked the senator through an audio recording he provided to KTVB.

"Oh, I'm not going to do an interview on that,” Risch responded. “Let’s talk about business today.”

Druzin told KTVB he was more than willing to ask Risch questions about the roundtable event, but he wanted to ask a range of questions while the senator was in town.

Instead, Risch made it clear to Druzin that he only wanted to answer questions about the business event.

“I'm not going there, if you want to do an interview with me on the business center, please do so,” he said.

However, Druzin persisted with his original question, asking Risch if he thought it was appropriate for the president to ask a hostile foreign nation to investigate a political rival.

“I think that's a fair question to ask Senator,” Druzin said. “Senator, with all due respect though, you are the chairman.”

At that point, Risch walked out. In Boise State Public Radio News' recording of the event, the senator can be heard saying goodbye to the hosts of the event and thanking them, then walking out. The entire recording lasted less than a minute.

"I was a little bit surprised at how abrupt it was,” Druzin said.

Since Risch is the chairman of the Senate Foreign Relations Committee, questions surrounding the president and his interactions with foreign countries are within the purview of the senator’s expertise.

"This is the committee that has the power to investigate our government's dealings with foreign countries and foreign leaders and most know that right now that is a huge issue,” Druzin said.

Risch did do a nearly 17-minute interview with KBOI's Nate Shelman on his radio show on Wednesday. The topic was on the situation that is ongoing in Turkey and Syria. Risch spent a few minutes giving background information on the situation to start the interview.

“The Turks do not like the fact the Kurds have strung out along their southern border, inside Syria,” he said. “So that’s kind of where it was at, we were there in the middle between the Turks and Kurds, both of whom are allies of ours.”

The president recently ordered the withdrawal of U.S. troops based in Syria, a move that has sparked objections from both Democrats and Republicans. Shelman asked Risch if Turkey would be attacking the Kurds if the troops had stayed where they were.

“Maybe, the Turks have been anxious to do this for some time,” Risch said. “And would they have moved without the president pulling the troops, maybe they would've maybe they wouldn't have.”

RELATED: Turkey begins an offensive against Kurdish fighters in Syria

Shelman concluded the interview by asking the Senator if he thought pulling the troops was the best move for America.

“I'm not in the position right now to criticize, what I want to do is get behind our troops and get behind our commander, and where we are right now and get us to a better place,” Risch said.

KTVB reached out to Risch on Thursday, but his press secretary said he was too busy for an interview. His office did provide the following statement:

" When the reporter was invited to participate in an interview at the Rural Women’s Business roundtable in Nampa, It was with the expectation that the topic of discussion would be empowering women business owners in Idaho and equipping rural entrepreneurs with the tools they need to succeed. Instead, the reporter repeatedly hounded the senator on unrelated questions about his support for Donald Trump. Each time, Senator Risch reiterated that he was glad to answer questions about the roundtable, and the reporter continued to push back."

“It’s extremely important to Senator Risch to make himself accessible to the Idaho media. He recently hosted two Boise journalists in Washington, D.C., and regularly makes himself available for print, TV and radio interviews with Idaho media. In addition, over the last few months, the senator’s press staff has visited nearly every newspaper, radio station, and TV station in the state to personally introduce ourselves and make sure our office is easily accessible for requests for comment and interviews. The senator wants to have productive relationships with state press and works hard to foster that relationship.”