Idaho has 7 candidates on its presidential ballot, including Kanye West

All seven of Idaho’s current general-election presidential candidates have met the criteria to be on the ballot, although West faces a legal challenge. 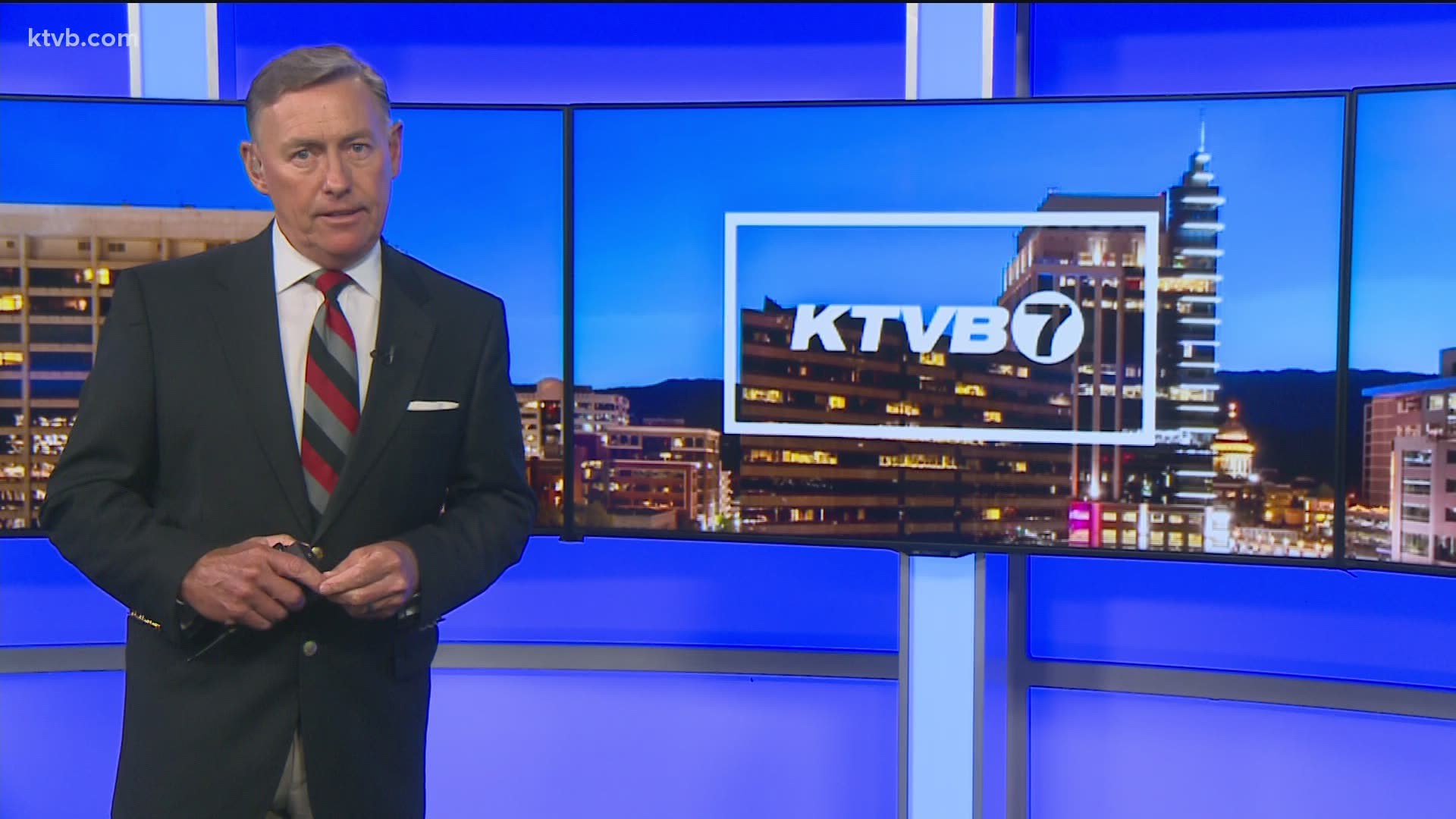 BOISE, Idaho — Beyond the marquee matchup of Biden vs. Trump, there are five more names on Idaho’s presidential ballot, from Kanye West to Rocky De La Fuente.

Rap star West’s ballot status is under legal challenge, but ballots already are being printed. And Idaho is notorious for having an easy process to get on its ballot; back in 2008, a Texas prison inmate, Keith Russell Judd, appeared on the ballot for the state’s Democratic presidential primary simply by sending a $1,000 check from his prison account.

Idaho was the only state where Judd made the ballot; at the time, then-Secretary of State Ben Ysursa said, “We got conned.” But the Democratic primary that year was of no legal significance anyway, as the party was using caucuses to select its presidential electors.

For the general election, there are two ways candidates can qualify for the Idaho’s presidential ballot: Either be the certified nominee of a recognized political party, or, when filing as an independent, submit at least 1,000 verified signatures of registered Idaho voters. All seven of Idaho’s current general-election presidential candidates have met one or the other of those criteria.

The four recognized political parties in Idaho with ballot status are Republican, Democratic, Libertarian and Constitution Party. “The chair of the party does that certification,” said Jason Hancock, deputy Idaho secretary of state.

So here are the candidates those four parties have certified:

Democrat: Former Vice President Joe Biden and vice presidential running mate Kamala Harris of California. Biden’s campaign website is joebiden.com, where he promotes his “Build Back Better” platform, promising to “rebuild the backbone of the country: The middle class,” while also offering detailed proposals issues ranging from jobs to racial equity to energy. Harris is the former California attorney general and currently serves in the U.S. Senate.

Constitution Party: Presidential nominee Don Blankenship of Henderson, Nevada; and running mate William Mohr of Michigan. Blankenship’s campaign website is donblankenship.com, where he touts his “Third Way for America,” based on “equality,” “ethics” and “exactness.” The former CEO of Massey Energy served a year in federal prison and a halfway house on misdemeanor charges of conspiring to violate federal mine safety laws related to a 2010 West Virginia coal mine explosion in which 29 workers died. Mohr is a former truck driver who chairs the Michigan affiliate of the Constitution Party.

Libertarian Party: Presidential nominee Jo Jorgensen of Greenville, South Carolina, and running mate Jeremy “Spike” Cohen of Boston. Jorgensen’s campaign website is jo20.com, where she advocates U.S. withdrawal from the United Nations and NATO; free-market economic policies; and decriminalizing drug use. Jorgensen, who was the Libertarian Party’s nominee for vice president in 1996, is a psychology instructor at Clemson University with advanced degrees and a background in high-tech; Cohen is a retired web designer and podcast host.

Jorgensen’s campaign bus tour is bringing her to Idaho this week, with stops planned Wednesday in Boise and Thursday in Idaho Falls.

The three independent candidates who are currently scheduled to appear on the Idaho presidential ballot — assuming the court challenge doesn’t remove West — are:

Roque “Rocky” De La Fuente of San Diego, who on his candidacy papers asked that he be listed on the ballot as Rocky “Rocky” De La Fuente, and running mate Darcy Richardson of Jacksonville, Florida. De La Fuente’s campaign website is rocky101.com. A businessman and perennial candidate, De La Fuente has run multiple times for president and Congress, and has run as a Democrat, Republican, third-party candidate and independent. Richardson is a former Democrat and founder of the Florida Peace and Freedom Party.

Brock Pierce of San Juan, Puerto Rico, and running mate Karla Ballard of Jacksonville, Florida. Pierce is a cryptocurrency entrepreneur and former child actor originally from Minnesota; his campaign website is brock.vote, where he lists his campaign principles as “liberty,” “sustainability,” “wellness,” “humanity” and “truth.” Ballard is a businesswoman and founder and CEO of YING, a peer-to-peer skill sharing platform.

Kanye West and running mate Michelle Tidball, both of Cody, Wyoming. Tidball is a self-described “biblical life coach.” West’s minimal campaign website is kanye2020.country; on it, he quotes from the Bible and supports school prayer, reforming policing; and avoiding “foreign quagmires,” among other aims.

West, a famed rap star who has been diagnosed with bipolar disorder, is a former supporter of President Trump who filed to run as an independent in Idaho, certifying that he wasn’t a member of any political party, but he’s actually a registered Republican in Wyoming, which he listed as his state of residence. West also noted on a Federal Election Commission filing an affiliation with the “BDY” party, an apparent reference to the “Birthday Party,” which West has cited in public statements but which isn’t a recognized political party in Idaho.

West told Forbes in July he picked that party name “Because when we win, it’s everybody’s birthday.” He’s qualified for the ballot in 10 states, including such battleground states as Colorado, Iowa and Minnesota. He’s made rambling statements about his reasons for running; in several states, Trump campaign backers have worked to help him qualify for the ballot, according to national news reports on CNN, Forbes and Politico.

The Idaho Democratic Party and two Idaho voters filed suit to have West removed from the ballot, contending in court documents that as a registered Republican, he’s ineligible to run as an independent, and that “votes for an ineligible candidate will dilute the voting power of Democratic voters, which will result in votes being effectively wasted, effectively disenfranchising voters.”

Idaho Secretary of State Lawerence Denney, when asked about the West candidacy and the legal challenge, said, “I’m not surprised by anything any more.”

West qualified for the Idaho ballot by collecting 1,000 verified signatures of Idaho registered voters between Aug. 17 and Aug. 24, all in Ada County. Those signing included registered Republicans, Democrats, third-party members and unaffiliated voters.

“You know, I didn’t even know I’d signed that,” said retired Boise real estate broker Randy Hickox, a registered Republican, when asked why he’d signed. “Must’ve been something that popped up on my computer or something. I think he has the right to be on the ballot, but I didn’t sign up for him. He’s not my guy.”

Molly O’Shea, a registered Democrat and retired educator, said she was approached by “a gentleman in the parking lot at Albertsons on Broadway” and said she’d not at that point heard about West’s support for Trump. “The intention was not to take votes away from the Democratic Party, but rather to give voice to independents as I feel we need to be more inclusive in our ballot process,” O’Shea said. “I am so taken aback.”

More from our partners at the Idaho Press: Treasure Valley elections offices prepare for November election during pandemic