Self-called legislative session ends with no votes, no action

The handful of lawmakers do not have a quorum, but are calling for a special session over concerns about Gov. Brad Little's response to the COVID-19 pandemic. 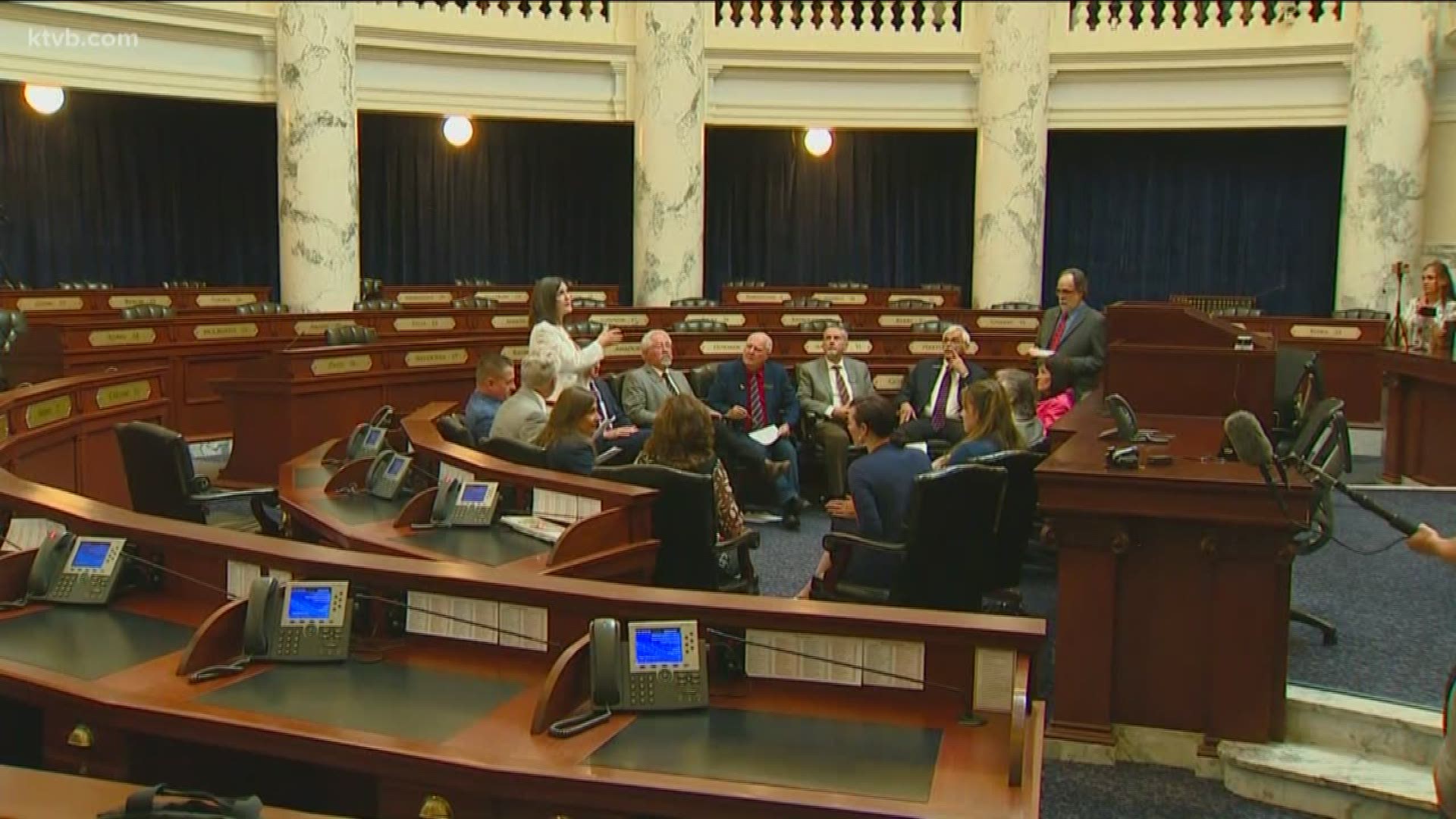 Fifteen House Republicans gathered in the House chamber on Tuesday morning, but despite calls from far-right groups, they didn’t take any votes or attempt to conduct any legislative business.

“This is not a session of the Legislature,” Rep. Judy Boyle, R-Midvale, told the group, as they assembled in the well of the House, seated in a tight circle. “We do not have a quorum.”

A boisterous crowd of more than 200 supporters, many of them armed, filled the 4th floor public galleries to watch and cheer on the lawmakers, who aired grievances against GOP Gov. Brad Little and his handling of the coronavirus pandemic, and read a multi-page “proclamation” that Boyle had posted on Twitter the night before, listing a series of allegations about the governor’s actions, charging that he's violated the state's separation of powers provisions in his COVID-19 response actions.

Boyle, a sixth-term Republican who chairs the House Agriculture Committee, held up her proclamation and said, “This is definitely how I feel.”

She said lawmakers haven’t had a chance to weigh in on the governor’s response to the coronavirus pandemic, including changes to the May primary election, which went all-absentee because of the pandemic. “We have never had an opportunity to publicly say how we feel,” she said. “He’s usurped our power as an equal branch of this government.”

She added, “I couldn’t believe that there wasn’t some mechanism for the Legislature to call themselves into session. … We are an equal branch.”

She called on the other lawmakers present to “take turns and speak up.”

Rep. Ron Mendive, R-Coeur d’Alene, said, “I’ve seen things happen that I never dreamed we would ever see in this country. … The damage here is much greater than what we’re facing from this so-called pandemic.” He added, "Our nation gave up our freedoms without even a whimper."

Rep. Heather Scott, R-Blanchard, first read two Bible verses, then said, “We read the Constitution up in North Idaho, and we know that it’s unconstitutional, these edicts, and we’re not enforcing it. Our sheriff will not enforce what’s happening. It’s just like business as usual up there.” She referred to Gov. Brad Little as “a self-appointed tyrant.”

Little was gone to the Magic Valley on Tuesday; on Monday, he said he didn’t know anything about the gathering.

Scott also decried “our horrible media,” and said, “I fear the longer this goes on, the more and more we’re going to lose everything we have, and … I truly believe a civil war is coming if we do not put an end to what we are seeing.”

It appeared that no one participating in or observing the session was wearing a face mask except for members of the news media. After the meeting, a counter-protester with a megaphone stood on the Capitol steps for a half-hour, shouting about the need for masks and social distancing to prevent the spread of COVID-19, according to KTVB-TV.

Rep. Brent Crane, R-Nampa, told the other lawmakers that he and his brother bought a business on the first of April, then found that “one individual” could tell him not to go to work.

“I look at this crisis as an opportunity for us in the future,” he said. “What are we going to do? What is the 2021 session going to look like? Well I can tell you from Rep. Crane’s perspective and from my district’s perspective, that we are looking at legislation that businesses could have some kind of predictability when this kind of crisis strikes.” He said he wants to legislate that for churches and schools, as well, “and as a legislative body … the ability to call ourselves back into session.”

The Idaho Constitution gives only the governor that power; changing that would require two-thirds support from each house of the Legislature plus a majority vote of the people at the next general election.

Rep. Tammy Nichols, R-Middleton, said, “I’m still waiting for zombies and aliens, so I’m just saying that nothing’s out of the limit right now.” That drew a ripple of laughter. “Anyway, I just really wanted to stand here today, I came here today because I just wanted to represent my people. … So many of us have heard from our constituents,” she said, “and how concerned they are with what’s transpiring.”

Nichols said she’s been frustrated on weekly calls the governor has held with all lawmakers to keep them apprised of the state’s coronavirus response. “You sit on there and you are just muted,” she said, and lawmakers are “patted on the head” and told to urge everyone to follow precautions.

“But in your heart of hearts you know that that’s just not where you’re at,” Nichols said. “We’re done. We’re done with the whole shebang and it feels like there’s no end in sight.”

She teared up as she talked of rioting and statues being torn down around the nation, and said she fears losing our country.

RELATED: How this spike in Idaho's COVID-19 cases is different from the last major rise in infections

Pastor Tim Remington, a current GOP state representative from Coeur d’Alene, opened and closed the gathering with a prayer.

Other state legislators were in the building for unrelated legislative meetings; Rep. Steven Harris, R-Meridian, joined some of his fellow House Republicans on the floor to chat before they started their meeting, but, dressed in a polo shirt and jeans, said he wouldn’t be participating in the self-called session.

As people began leaving after the hour-plus gathering, Diego Rodriguez, spokesman for the Freedom Man PAC, an unregistered political action committee that had called on all legislators to participate in a self-called special session on Tuesday, told a supporter that lawmakers didn’t believe they could legally take action without a quorum, so they just issued a proclamation. That was despite a legal analysis commissioned by the Idaho Freedom Foundation from two Arizona lawyers that said they could do it; former Nampa City Council President Bruce Skaug, a personal injury attorney, consulted with the Arizona lawyers and determined their arguments were “plausible.” The Idaho Attorney General’s office and at least two other Idaho attorneys concluded otherwise, in detailed legal analyses.

Rodriguez said the proclamation will be used to get a court injunction against the governor, but Crane said that’s not true.

“The proclamation was just more of how we feel,” said Crane, a 7th-term representative. “The governor is put in a very difficult spot. He’s doing what he thinks is best in order to control the situation.”

The crowd of supporters including people carrying signs with such slogans as “Dictator Little is non-essential, quarantine him now,” and “Darth Little May the FORK be with you!” tied to a small pitchfork the shorts-clad protester carried on his shoulder.

Ammon Bundy attended, greeting supporters amid the crowd and watching from the VIP gallery on the Capitol’s 4th floor as the lawmakers met. So did Eric Parker, founder of the “Real III%ers of Idaho,” who said his “legislative team” was monitoring the gathering as it does all legislative sessions.

The crowd began gathering on the Statehouse steps at 8 a.m.; around 8:40 a.m., it began filtering into the state Capitol. A uniformed Idaho State Police officer greeted people pleasantly as they passed in the front door at the top of the Statehouse steps.

Col. Kedrick Wills, chief of the Idaho State Police, issued this statement: “Members of the Idaho State Police have a mission to keep the public and elected officials safe as they work or visit the Statehouse, which is the people’s house of Idaho. ISP troopers work every day with Idahoans who bring a wide range of perspectives helping them keep their demonstrations peaceful which allows voices to be heard.“

Here are the 15 lawmakers who participated in the self-called gathering in the House chamber on Tuesday; all are House Republicans: