'We feel horrible about it': Processing error leads to thousands of Ada County ballots being reissued

The Idaho Secretary of State's Office said a coding error recently led to nearly 5,000 Ada County voters getting the wrong ballot for the upcoming May primary. 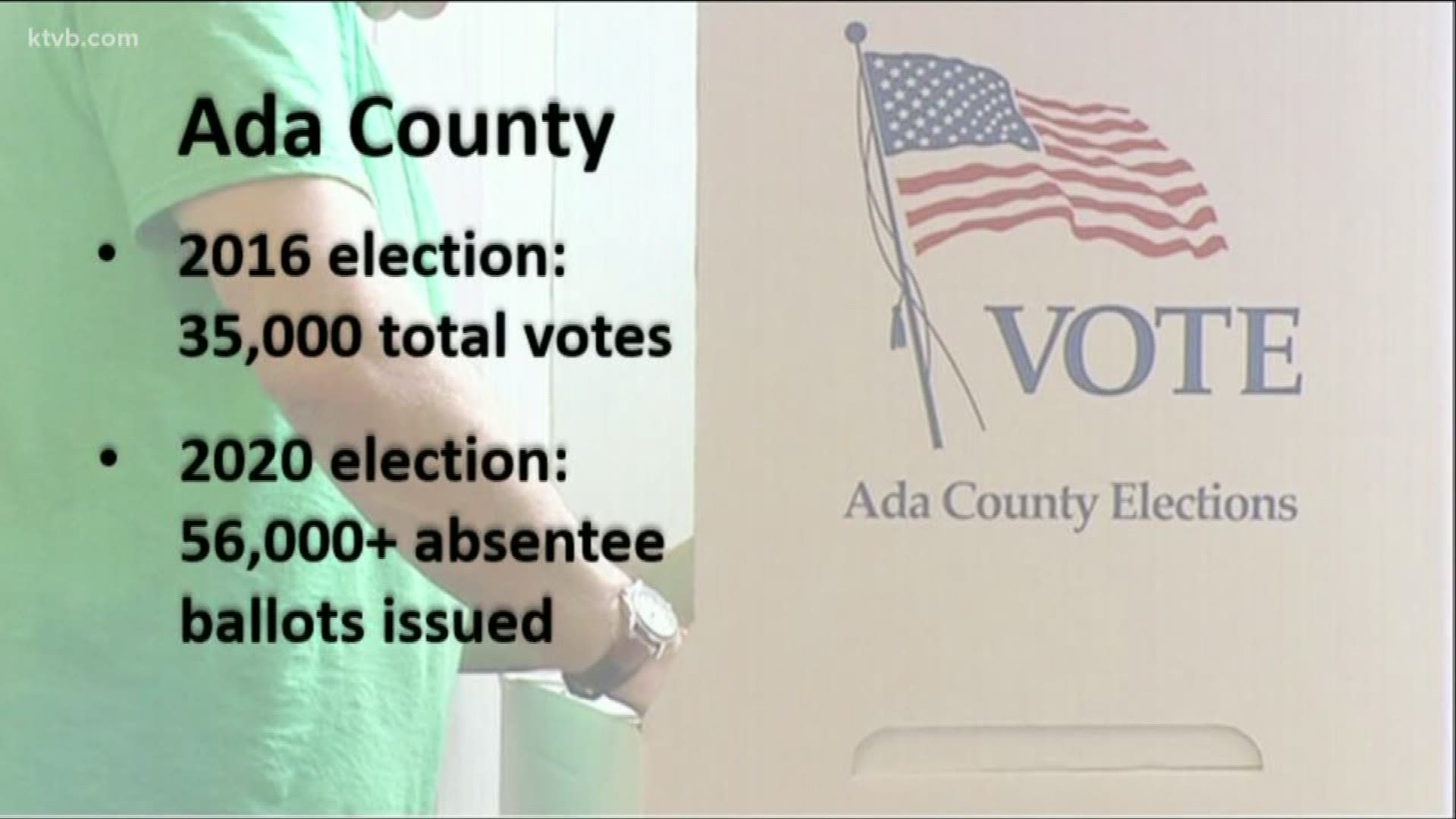 ADA COUNTY, Idaho — Thousands of Ada County voters received the wrong ballot for the upcoming Idaho primary on May 19. Because of the COVID-19 pandemic, the May election is being done solely by mail-in, absentee ballots - a first for the state of Idaho.

The new process has had a few hiccups, including a computing error for some Ada County voters. Last Friday, Ada County Clerk Phil McGrane said his office started getting several calls from voters claiming they had gotten the wrong ballot in the mail and not the one they had requested.

Through working with the Secretary of State's office, the error was eventually traced to a processing issue at their office.

McGrane said early in the process, Ada County got hit with a large wave of online ballot requests and fell behind so they asked the Secretary of State's office to help.

“I know many voters had said, ‘Hey it’s been a while since I requested my ballot, where is it?’ So in order to catch up, we did a batch process,” McGrane said.

That batch process was done through the Secretary of State's office and left many Ada County voters getting the wrong ballot in the mail.

“When that batch was processed, there were over 20,000 ballots in that block," said Deputy Secretary of State Chad Houck. "And then that batch was processed, there was a coding element in the script that improperly identified those, pushed them through as nonpartisan ballots. As a result, because it was so identifiable, we were obviously able to then go back and look at that data, identify exactly who had received those ballots erroneously. So we thank those citizens that called in and let us know."

According to Houck, of those 20,000 ballots run in that batch, 4,950 Ada County voters received the wrong ballot.

The majority of people affected were unaffiliated voters who had requested a Democratic ballot but instead received a nonpartisan ticket.

McGrane said those voters are now being sent the correct ballot - which should arrive in mailboxes by next week.

“We feel horrible about it but we are taking the proper steps to make sure every voter gets the proper ballot and they do get the opportunity to vote the way they intended," McGrane said.

Houck said the error was a one-time issue.

RELATED: Denney: All Idaho voters will have to request absentee ballots for May primary

Houck explained that another issue their office has seen with this election is confusion about nonpartisan ballots. Those types of ballots only include things like school bonds or levies and nonpartisan jobs such as judges. They do not include candidates from both parties.

Those voters wishing to vote on actual candidates must request a party-affiliated ballot.

When it comes to this election, Houck said Idaho is seeing a large number of ballot requests. As of Sunday night, more than 122,000 online requests for an absentee ballot had already been made - a huge increase from what they normally see.

"Just to kind of put it into scale, in a presidential primary, if you combine early voting and absentee voting, you only saw 25,000 ballots – roughly – statewide cast in both early and absentee," he said. "In the present situation, just with online application requests – not including paper – we’ve already seen over 122,000 requests statewide."

Ada County is also seeing more absentee ballot requests due to the change in the voting process.

McGrane said a comparable election to this one would be the 2016 presidential primary. In that election, Ada County saw 35,000 total votes. So far in this current May primary, the county has issued 56,000 absentee ballots and counting.

“Most people have been scaling down in the midst of COVID-19," he said. "We’ve actually had to ramp up and bring in additional people to handle the enormous volume we’re facing."

RELATED: Idaho Secretary of State partners with grocers to make sure voters don't have to pay for ballot postage

Houck said the new voting process is a big change for the state and each county elections office but he's impressed with how hard each county has been working.

"It has been a huge mountain to climb and not just for the Secretary of State’s Office but also for the counties," he said. “This has been an interesting election and it hasn’t even technically started yet so to speak. I am absolutely impressed with the work that has been done by the county clerks and their staffs. They really should get a big pat on the back.”

Idaho voters have until 8 p.m. on May 19 to request an absentee ballot. Voters then have until June 2 to fill out the ballot and return it. Once a ballot has been requested, it takes about one week to get mailed out.

Ada County voters with questions or problems voting can call the elections office at 208-287-6860.

Statewide voting information can also be found on the Secretary of State's website.