Former state Rep. Paulette Jordan and Lt. Gov. Brad Little spent 90 minutes answering our questions and, at times, sparring with each other. 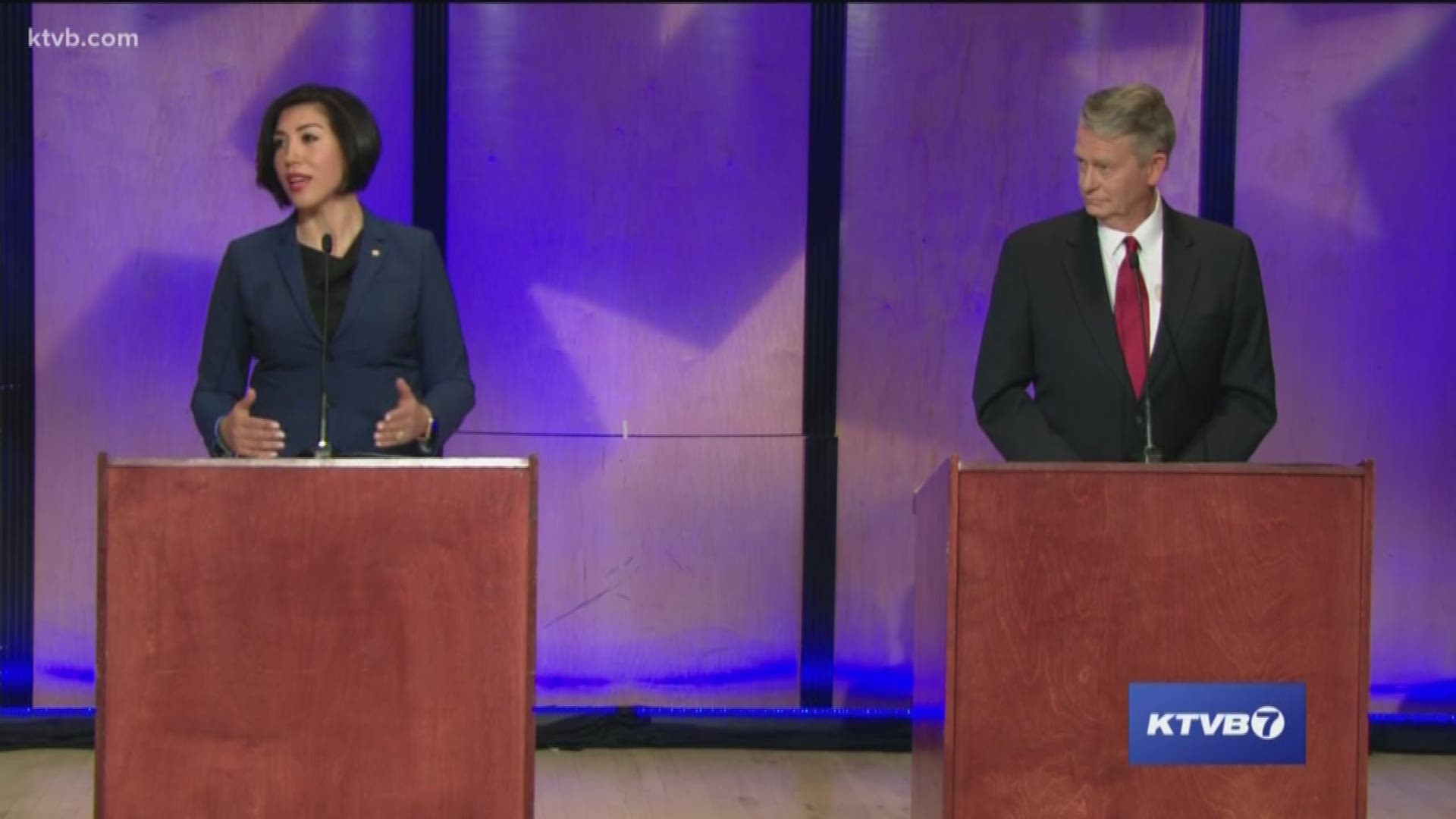 NAMPA — Decision 2018 is just a week and a day away and on Monday, KTVB hosted the final gubernatorial and superintendent debates at Northwest Nazarene University.

The debate got heated, especially on the topics of Proposition 2 and Medicaid expansion, their stances on Proposition 1 and gambling, marijuana legalization, campaign contributions and outside influences, and firefighting on public lands.

Little again dodged the question of whether he personally will vote for Proposition 2 which would expand Medicaid to Idahoans who fall in the coverage gap. Jordan referred back to the need for Medicaid expansion frequently throughout the debate when answering questions on other topics.

There were quite a few contentious moments between the candidates, with Jordan often saying the "Otter-Little" administration has failed Idaho, and Little defending his years of experience.

"To get it implemented it is not auto-pilot. It says there in the language in the initiative the director of the Department of Health and Welfare has to work through this plan and we have to go to the federal government. As governor you don't just get to wave a magic wand and have it happen; you have to realize every dollar appropriated to the state has to be appropriated by the state Legislature. I'm the one with the skills, I'm the one with the experience, I'm the one that can build confidence to get this done and get it implemented in an Idaho fashion. Today our exchange in Idaho is without a doubt one of the best because it's an Idaho solution, not a federal solution. I want these people addressed but I want an Idaho solution," Little said.

"And I want to get us moving along," KTVB's moderator, Dee Sarton, said.

"Dee, I'd like to respond to that," Jordan said.

"Primarily because we have someone who is lying to the people. It's unfortunate we have a lieutenant governor who has served nine years and has done absolutely nothing for Idaho in terms of quality health care or even attainable health care," Jordan said. "We have new leadership going to bring bold new ideas and solutions. We are offering better opportunities primarily because we are not only going to expand Medicaid and bring our resources back but that additional money will help us generate a new program."

On the topic of Proposition 1, the initiative to re-authorize “historical horse racing” betting machines at racetracks, Little said he would vote for it because a thriving horse racing industry helps rural Idaho, while Jordan said she would not.

"It's not about horse racing because horse racing is already legal according to the Constitution," Jordan said.

"It is legal but we know horse racing was doing fine until Indian gaming expanded, the lottery expanded," Little responded.

"So now you're blaming the tribes?" Jordan asked.

"Look at the revenue going into horse racing prior to the expansion of Indian gaming."

"So you don't support a free market?"

"I always support a free market."

"It doesn't sound like it because you're blaming tribes now for what you say is hurting horse racing."

"I'm saying in a free market there'd be gaming everywhere but gaming is limited by our Constitution. But the tribes have an exclusion to that after the lottery came in.”

We didn't quite get a definitive answer from either candidate on prison overcrowding and what they are going to do right now to alleviate the problem.

You can watch the whole debate and more riveting arguments between the candidates on the KTVB Debate page.