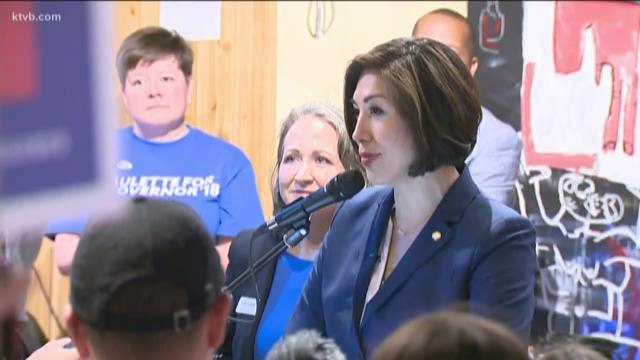 BOISE — Concerns are being raised over the involvement of Idaho Democratic gubernatorial candidate Paulette Jordan’s campaign with the setting up and funding of a federal super political action committee (super PAC).

Multiple sources close to the campaign and highly-active volunteers told KTVB on Wednesday that the manner in which finances were being used in relation to the super PAC prompted former campaign manager Michael Rosenow to resign from his position last Friday.

Jordan's campaign says Rosenow's resignation, as well as those of two other staffers, were part of a planned leadership transition. Acting campaign manager Nate Kelly says the former staffers announced their departure once they were phased out or demoted, and the campaign had planned to make an announcement about the changes.

Multiple sources who asked to remain anonymous told KTVB on Wednesday that Kelly's claims that there was a plan to phase out the three high-level staffers is untruthful.

But unlike traditional PACs, they may not contribute directly to a federal political candidate or party, and their spending must not be coordinated with candidates they benefit.

The Strength and Progress Inc. super PAC is registered with the FEC and no expenditures or contributions have been reported. Jordan’s campaign says it was created to accept donations from the Coeur d’Alene Tribe to support First Nations issues nationally.

Sources close with the campaign informed KTVB of Strength and Progress Inc. on Wednesday. Federal Elections Commission documents show the super PAC is registered to 30 N. Gould Street, Suite 7981, Sheridan, WY 82801. That address is a mail forwarding address registered to Wyoming Mail Forwarding LLC. The treasurer of the super PAC is listed as an individual named Michael Davis, who has a PO box set up in Irvine, California.

Current campaign communications director, Dana Ferris, says Nate Kelly met with Coeur d’Alene Tribe leadership in May, and along with expressing interest in directly supporting Jordan’s campaign for governor the tribe was “interested in whether Rep. Jordan could specifically support First Nations’ issues”.

In a statement, Ferris said, “Since [Jordan’s] Campaign cannot accept nor direct earmarked contributions to committees supporting her campaign, Kelly advised the Tribe to support a federal committee that aligned with the Tribe's interest in supporting First Nations issues nationally.”

Kelly then contacted Michael Davis, who Ferris says offered to assist the tribe in supporting First Nations’ issues federally and then set up Strength and Progress. We are working to confirm who Davis is and his connection to Jordan or any members of her campaign staff.

Ferris says Jordan’s campaign has not received any support from Strength and Progress and there is “nothing improper about these actions; the legality is unambiguous, and any innuendo to the contrary is completely false and intentionally misleading”.

"It is worth noting that according to the AP (Feb. 2018) there are 150 registered PACs in Idaho that are not associated with any political party.

Amid the resignations and turnover, the communications director of the Idaho Young Democrats resigned from his position on Tuesday, citing issues within the Jordan campaign, unrelated to the IDYD organization. Carter Jones' letter reads as follows:

I have enjoyed working on the IDYD board and in Idaho politics. I thank everyone for this opportunity. After discovering some disheartening information regarding the Jordan campaign I can no longer ethically continue. If you have not yet heard, four members resigned from the Jordan staff not issuing comments due to NDAs. One was able to say "I'm so embarrassed and ashamed. Bye." I understand that this board is a separate entity from the Jordan campaign and has not contributed to the vile ongoings. But I know that my efforts for IDYD will only continue to contribute to her vile actions."

The letter goes on to say:

"I understand that we still have many fantastic candidates, but I am no longer able confidently able [sic] to work in this field.

While I no longer will have a say in the ongoings of IDYD I strongly recommend distancing yourselves from Jordan personally and organizationally.

I do not know the extent of what she has done, but I do know that I am no longer confident in the future of this party. I do know that you all are amazing humans who I am so proud to know. Hopefully, we will cross paths again.

In the most unfortunate of circumstances,

In addition, the group Students for Paulette is on a brief hiatus to determine whether they will disband or proceed forward and continue endorsing the Democratic gubernatorial candidate.