With a little more than six weeks until Election Day, the Democratic gubernatorial candidate answered questions Friday on Nate Shelman's show on 670 KBOI talk radio about the latest headlines and her platform. 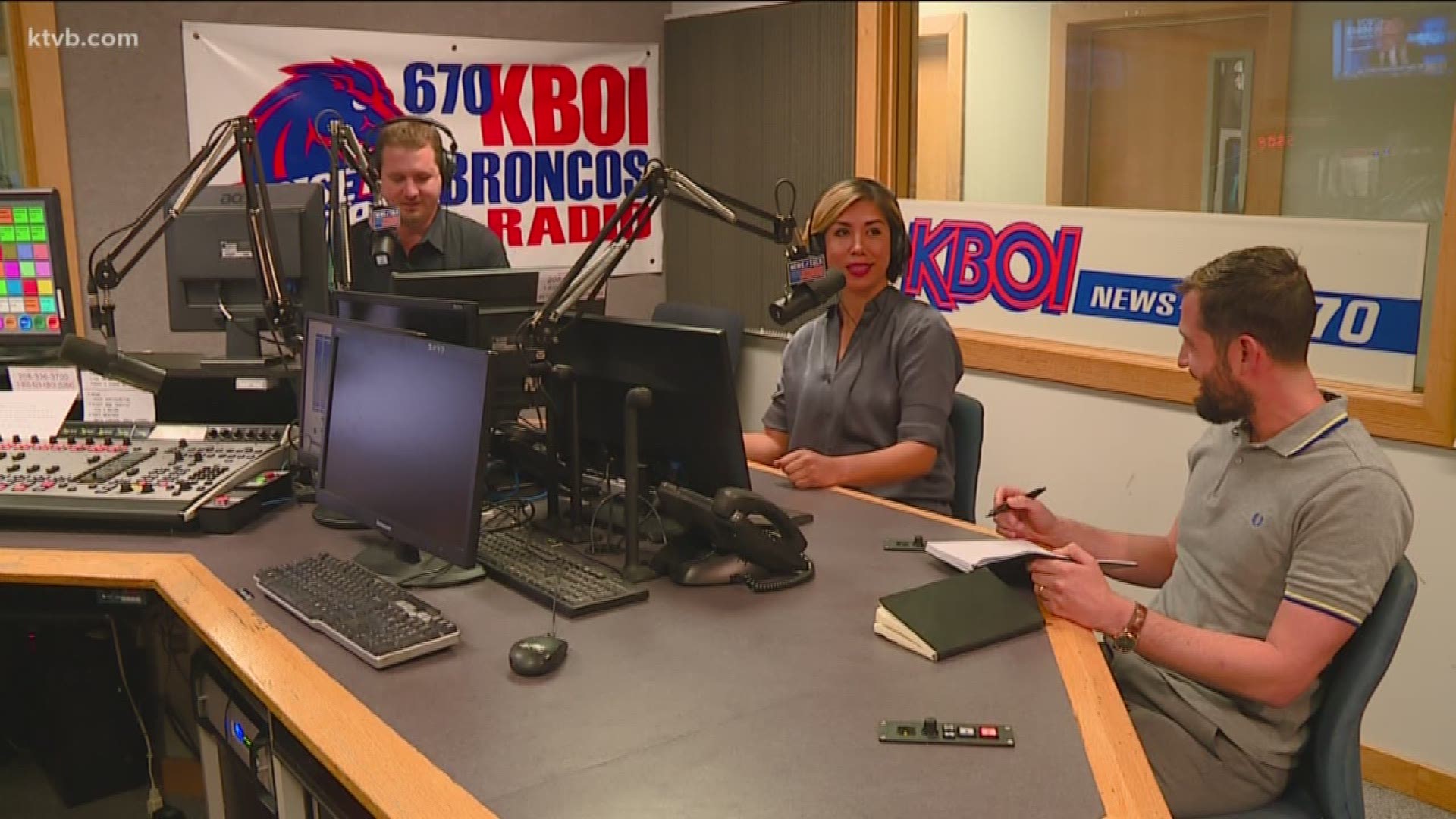 Staff shake-ups and super PAC ties made for a dramatic week down at Paulette Jordan's campaign headquarters.

With a little more than six weeks until Election Day, the gubernatorial candidate answered questions on 670 KBOI talk radio about the latest headlines and her platform.

KTVB's Morgan Boydston sat in, as we were invited to record Nate Shelman's hour-long segment with the Democratic candidate for Idaho governor.

A note: KTVB attempted to get ahold of Jordan's campaign manager multiple times over the last two days to answer lingering questions, but didn't hear back. KTVB was told Friday afternoon as we were trying to track down Jordan that she wasn't in town.

Once she and her campaign team saw we were in the studio with Shelman, Jordan hesitated to come in and go on the show.

WATCH: Paulette Jordan on the Nate Shelman Show on 670 KBOI

A staffer told our crew, "You guys can't film" to which Shelman responded, "Well, no, that's actually my choice. Just so you know, it's my choice, I'm allowing this."

When she came into the studio, Nate welcomed her in: “Democrat gubernatorial candidate Paulette Jordan joining us here in studio. Welcome in."

"Hi Nate, I see you have a lot of uninvited guests here that we weren't aware of," Jordan responded, "We welcome everybody. So, glad to have you."

First up, the latest headlines out of Jordan HQ: staff shake-ups during her run and the campaign's ties with a super PAC.

Shelman: "Right before the primary there was a staff change-up, and last week --"

"Isn't that typical, doesn't that happen in many campaigns?" Jordan responded.

"I don't know if that happens a week before the primary."

After three top staffers resigned last week, the campaign said it was apart of a planned leadership transition.

“I think they were misled. And unfortunately that’s the challenge with campaigns and we weren't there to even discuss the issue. But you have issues with campaigns that are very natural - growing pains, as they say,” Jordan said. "You have to remove the negative and it’s unfortunate. I like to say make everyone family in our campaign and I think that's the great part of this it's very fluid as we're constantly growing and progressing and we're everywhere across the state.

"You're going to have people who have differences and for me as a leader it is upon me to ensure we have the best people representing this campaign and the vision we want to be represented collectively."

Then onto the recent creation and ties to a super PAC: Jordan's campaign says it was set up so the Coeur d'Alene Tribe - of which she's a member - could donate and support First Nations issues.

Shelman asked: "Have you helped with any fundraising or advising for super PACS?"

“Not for super PACS; I don't have any money coming from any super PAC via me to my campaign. What I have done is encouraged my own tribe - who wants to help other campaigns of other native women - bring about more support and change for the indigenous voice. Which is their right to do."

Jordan says it's not her PAC and she doesn't own it, but she helps influence it by her voice in this race and the fact she is representing women and people of color.

“It is a different kind of campaign you're running,” Shelman said.

“Oh, very much. Unprecedented,” she responded.

“What makes it so unprecedented?”

“Unprecedented because they are seeing someone who has never been of this land. As the only real Idahoan, the only real American running for this position as governor of a state in our country, we're setting all kinds of examples and ways to show as an indigenous voice we are wholly connected to this land and connected to our people,” Jordan said.

Listener calls poured in about her platform with topics ranging from growth and homelessness to Prop 1.

"I, myself, am going to be voting against Prop 1 because I don't want to see more tax dollars going to issues of security, police force, educating people, such as the gaming commission," Jordan told the listener. "This is not about horse racing itself; it's simply about slot machines. I find it to be still against the Constitution. If people pass it then I will support the will of the people."

Listeners asked about what progressive means to her:

There was a question about education, as well.

“Our education system needs to be reformed altogether; we need to pay teachers better, we need to ensure we're not increasing taxes at local level,” Jordan said. “All this money should come from state general fund.”

“Do you want to make any changes when it comes to the Second Amendment or guns; do you want to see anything implement or not implemented. Anything banned, not banned?” Shelman asked as a follow-up to a listener's question.

Paulette: “No, no, nope. I am fully in support. My brothers are gun owners who actually have semi-automatic assault rifles, AR-15s. I support them having that; no one should take that away. In fact they're veterans, so they're responsible gun owners. My big position is just assuring that we have comprehensive background checks.”

To point out a discrepancy: you heard Jordan is a gun owner and said she supports AR-15's during Friday's talk show. But when KTVB's Joe Parris asked during our primary debate this spring if she believes the AR-15 has a place in Idaho, she said, "it doesn't have a place here in Idaho" but went on to say, again, she doesn't support taking guns away from responsible gun owners.

Shelman wrapped up asking what the Democratic candidate from Plummer feels her chances are.

“Absolutely amazing. They're positive, strong. I mean, this is the reason everyone is running scared. Even the media. You know, these lies are going to come out --” Jordan told Shelman.

“I'm in the media, by the way,” Shelman responded.

“Yeah, we love everybody. But, yeah, there's some folks they made some missteps. It's unfortunate, but the truth always rises above,” Jordan added.

Jordan added there are two sides in this race: a true progressive but conservative Idahoan, and corporations, corruption and cronyism.