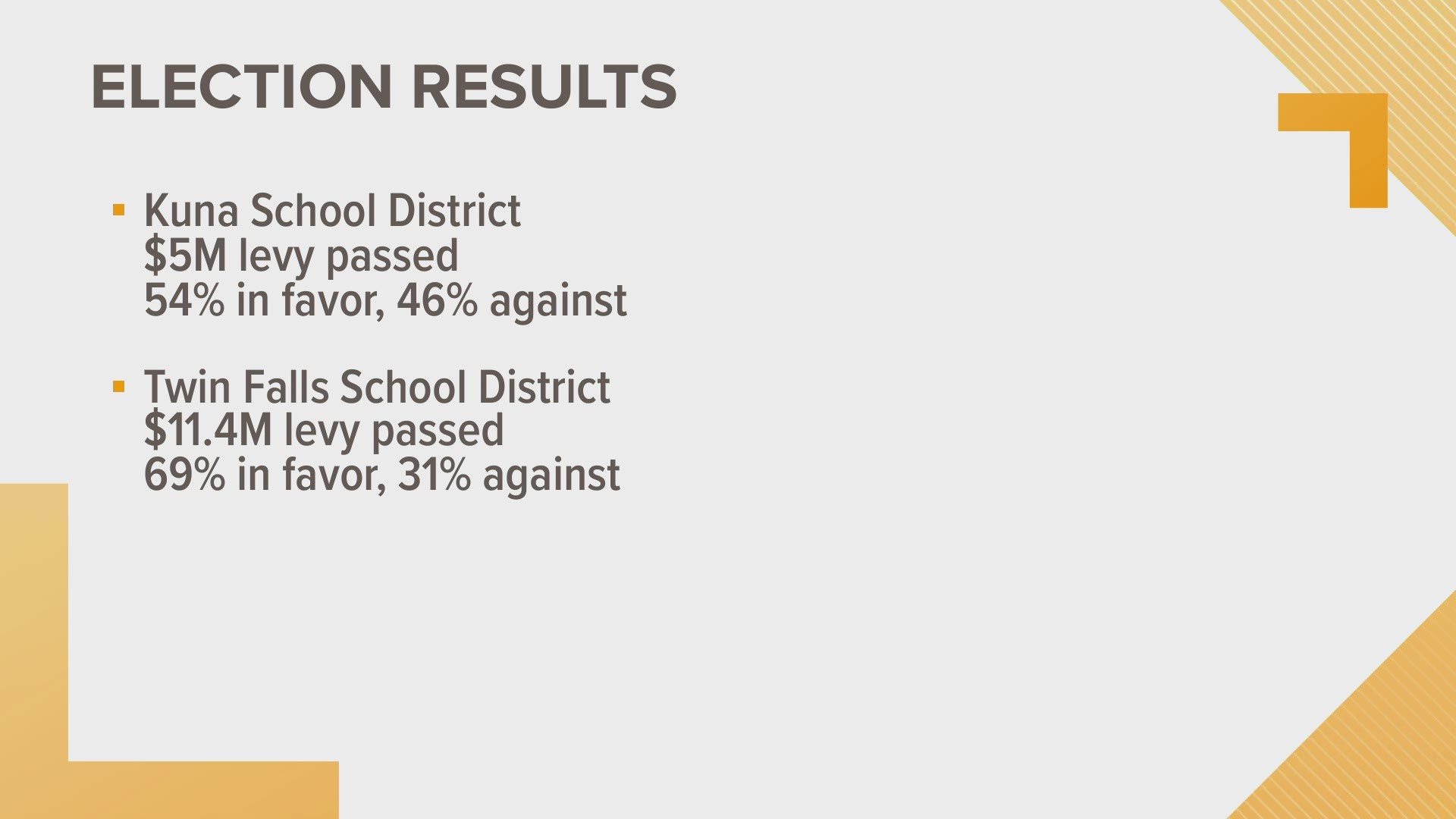 With some numbers still incomplete as of late Tuesday night, it appears that most, but not all, of the requests passed.

Two attempted recalls - one for the mayor of Hagerman and the other for a Nampa School Board trustee - both failed.

The results are listed by county and district below. This list will be updated as the numbers come in.

Voters in Ada and Canyon counties approved a two-year, $5 million supplemental levy for the Kuna School District. The newly-approved levy, which replaces an expiring levy of the same amount, passed with 919 votes (53.6%) in favor and 796 votes (46.4%) against.

Nampa School Board Trustee Mike Kipp avoided recall Tuesday night. An effort to recall the Zone 2 trustee failed with 436 votes for (46.7%) for and 497 votes (53.3%) against. Those attempting to recall Kipp said in their argument that they believed he failed to represent the majority of those in his district. In his response, Kipp said he would not be swayed by the "loudest" voices, but instead would continue to do what he believes is best for the entire Nampa School District community.

As of late Tuesday night, results were still out for the Canyon Owyhee School Service Agency (COSSA) levy. The 10-year levy would continue funding for the Owyhee-Canyon County cooperative that provides educational programs to several rural school districts.

The Emmett School District got mixed results for its two funding requests on the March 9 ballot. A 10-year plant facilities levy narrowly failed with 1,154 votes in favor (53.5%) and 1,002 votes against (46.5%). The request required a 55% majority in order to pass.

One of the few non-school-related items on March 9 ballots, a request to recall Hagerman Mayor Alan Jay failed by just 13 votes. With 116 votes in favor of the recall and 129 votes against, Jay will retain his seat.

Voters in Gooding and Twin Falls counties narrowly approved a two-year, $300,000 supplemental levy for the Hagerman School District. The levy, which replaces an expiring levy, passed with a razor-thin margin of 222 votes in favor (50.23%) and 220 votes against (49.77%). Note: these numbers are still considered unofficial, and a recount is possible, given the two-vote margin.

A two-year, $1.3 million supplemental levy has been approved for the Gooding Joint School District. Gooding County is reporting 320 (69.9%) votes in favor and 138 (30.1%) against. Lincoln County, which has voters in the school district, had four people vote for the levy and nine votes against.

Voters in Twin Falls School District overwhelmingly approved a two-year, $11.4 million levy. The new levy replaces an expiring levy and despite the large dollar amount, will actually decrease taxes by about $7 per $100,000 of assessed value. The request passed with 1,484 (68.6%) votes in favor and 679 (31.4%) votes against.

Voters in the Cascade School District overwhelmingly approved a two-year, $1.3 million supplemental levy. The newly-approved levy replaces a two-year levy of the same amount that is about to expire this summer. It passed with 244 (72.2%) votes in favor and 94 (27.8%) votes against.

The newly-approved bonds will replace existing bonds, reducing taxes by $2 per $100,000 of taxable assessed value.