After seven years as congressman in Idaho's 1st District, Republican gubernatorial candidate Raul Labrador says now is the time to settle back into life in Idaho and a new opportunity to serve. 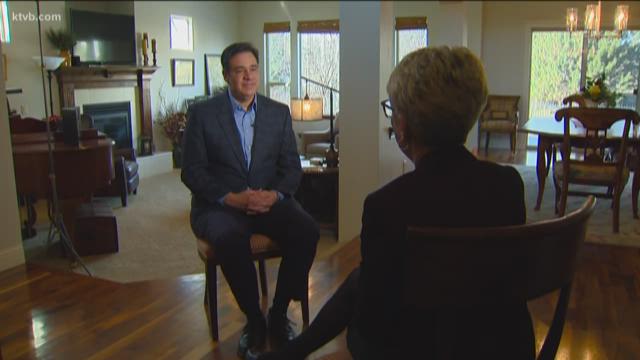 Idaho Republican gubernatorial candidate Raul Labrador invited us to his home for this interview because he says home is his center of peace. For the past seven years, as congressman in Idaho's 1st District, he's worn a much traveled path between Washington, D.C., and Eagle to spend weekends with his wife and five kids.

He explained that now is the time to settle back into life in Idaho and a new opportunity to serve.

“I'm going to be a grandparent in two months and I'm super excited about that so I'm excited to be able to serve the people of Idaho because I love serving the people of Idaho," he said. "I love public service but at the same I'm able to do it closer to home."

Labrador says being governor would be the best of both worlds, and he believes his conservative approach to government is needed back home as much as in the nation’s capital.

He explained the tax plan he’s proposing like this:

"I have a plan that I call the 5-5-5 plan. I want to have 5percent income tax, 5percent corporate tax and 5 percent sales tax. I want to reduce all of our taxes. I want to make sure that we broaden the base. We have a lot of exemptions in the tax codes where the government has picked winners and losers. I want to get rid of all those exemptions. I want the local mom and pop shop to be treated the same as the big corporation that we want to attract to Idaho. I as a governor, I'm going to go to California, I’m going to go to all the different states that are now struggling with really high taxes, and I'm going to say, 'come to Idaho. We're open for business.'"

Labrador says his economic plan relates directly to his goals for education.

Labrador also wants local control for education and says state mandates are not good for education. He wants to see the conservative philosophy applied at the state level by giving communities, local teachers, parents and school boards more control.

When it comes to health care, Labrador is against Medicaid expansion because he says it’s failing and no solution at all. He wants to reduce the cost of health insurance so that people in the Medicaid gap will be able to afford it.

As you work through Labrador's ideas and conservative philosophy he consistently brings it all back to family,

“I want every one of my kids to be able to come back to Idaho after college to have wonderful opportunities, to know that there's high paying jobs, that they can raise their families and that they can be very successful. And I want that for every person in Idaho."